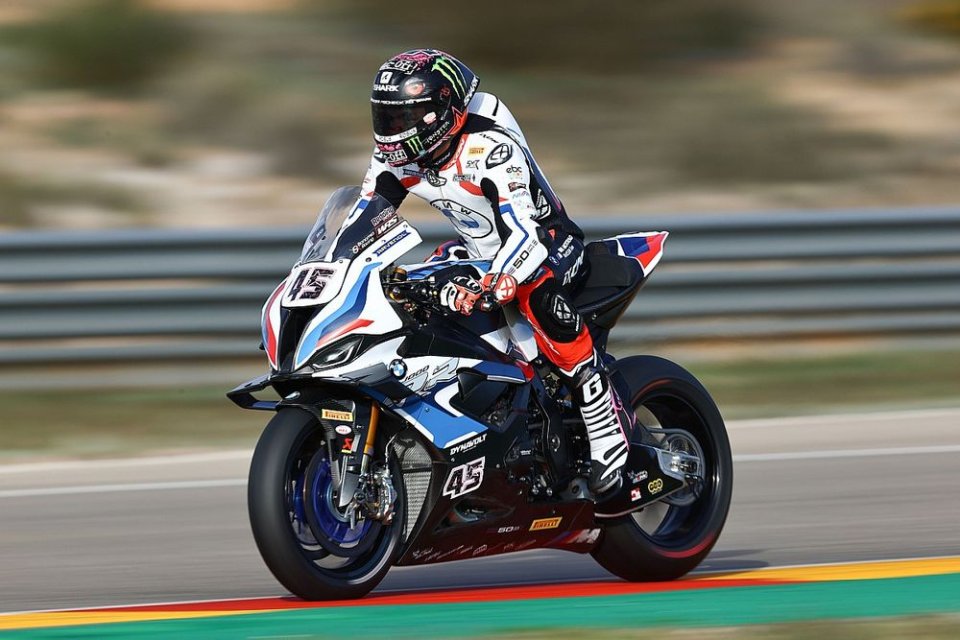 An excellent second place for the British rider Scott Redding, who was able to benefit from the crashes of the two fastest men on the track. After a first part of the race in which he proved to be very fast, the rider of the Monaco manufacturer had to give in to the speed of Bautista, who changed pace at the halfway point of the race, pulling out a few seconds lead over him.

It's a second place to be pleased with, because Scott didn't immediately find the right feeling with his BMW. Results like this are the result of a long process of adaptation to the bike by the rider, and a fine-tuning of the vehicle by the mechanics, who believed in the potential expressed by Redding. All the hard work and fatigue are tangible in the words of Scott, who after this good result opened up, telling us about his adaptation to the Bavarian bike.

"As in Most we had a good pace" he declared "but we needed to work more on the electronics to have more feeling, it is something that needs a lot of work. I use it a little differently from the others. Here I felt good, at a certain point I thought I could achieve something more but it is something that requires that everything is fine. Qualifying is a part of this, and starting is also a factor. In the first laps I went very fast, even if it's usually a phase in which I struggle. I have to improve in the middle of the race, where I’m struggling, I also lost a bit of concentration, the lack of power is frustrating. It is a situation that leads you to push a lot under braking, overheating the front, leading you to take risks. However, 20 points are very good, now we have to improve further, I'm happy that we are back in front and we have found a good base ”.

Is braking where you can make a difference?

“We suffer a lot in top speed compared to Alvaro. Compared to the others, we have a bit less grip when exiting or stability when braking. The important thing now is to have a good base to work on. I feel we are competitive, we are missing that step to be with the leaders. Towards the end I was coming back strong, which means that I managed the tyres well. There are a lot of variables to check, but when the difference on the straight is so big, there is nothing doing ".

Do you think you would have had a chance to fight with Jonathan and Toprak?

“With Jonathan perhaps, Toprak is very fast here when he's in good shape. We’ll see tomorrow, I prefer it when I finish in second place with everyone on the track. The race will be completely different, there will be two more riders to beat. Did Toprak manage to stay up? ".

He fell at the end of the gravel.

"Fuck, for what I saw of it, it was impressive."

Do you think you can fight for the podium in the next races?

"Yes, you know I wasn't expecting it here and we succeeded. It won’t be easy. There are some tracks where we will suffer more and others where we can have our say. In Barcelona it will be difficult for us, but we can only work hard and do our best. I have to maximize the potential of my bike. I'm not afraid to try new things if necessary. Sometimes we have gone in the wrong direction but it is because we are trying to find the right one to take and we are improving. "

Do you feel like you're taking some kind of revenge?

"Yes, when I made this decision I heard just about everything in the media: that I did it for the money, that my career was finished. All this pushed me to do better, to give my best. I told the team that we should give it our all but we would get closer and we did. From Aragon to today the worst is over”.

When you signed up, did you think you would be mid-table at this point?

“I didn't come to BMW for the money. Money doesn’t change your life and this is my job. When I was with Ducati I was confused about some things. When I signed the contract I said I wanted to win with this bike. I felt too much hate about me and felt I had to do something. After Aragon I thought I had made one of the worst mistakes of my career and I wondered where I was going. I could have accepted it or tried to push even harder. I pressed the team, there was a lot of tension for some races but I didn't have any other options and they supported me. But now we are here, we have arrived ”.

With your results from last year how could they not listen to you?

“Yes you’re right, but when you come from another bike, the first thing they tell you is to adapt to the new one. I have ridden a lot of bikes that I have been fast with, and I adapt quickly to new tracks as well. But here things were different: they have been going in one direction for 4 years and I tried to pull them in the other. They are 20 people against one but I realised that the limit was not mine. So first I had to show them I was fast and then they followed me. I showed them I know what I want and they gave it to me. Luckily they believed in me and we're doing it. The results are coming ”.