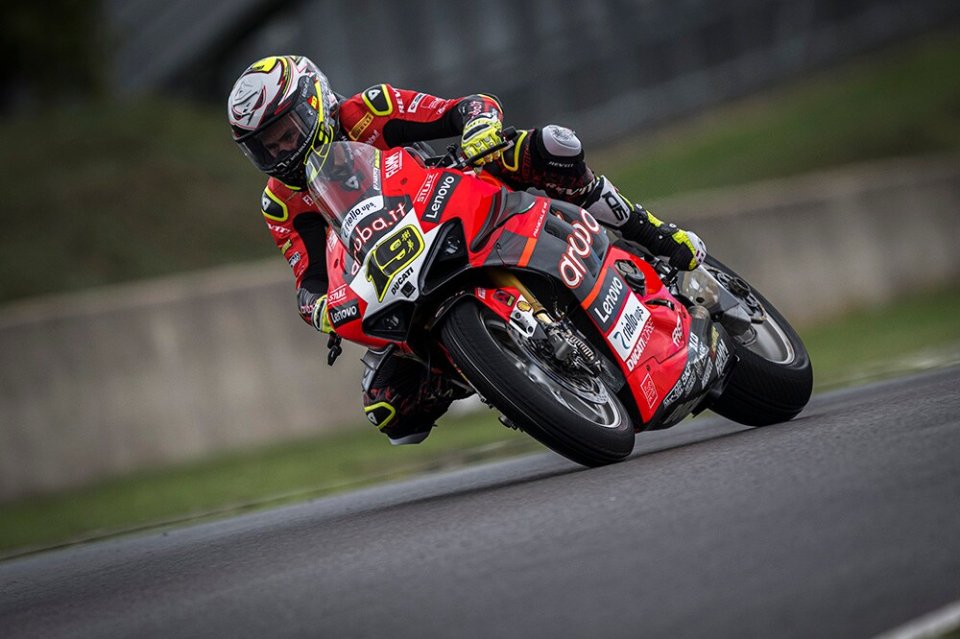 For Alvaro Bautista, the Magny-Cours track on the Ducati is still a big unknown. He had to deal with the rain today, and a fell during the FP2 (but he wasn’t hurt), and he doesn’t have fond memories of 2019, either. Today, at the end of the first two rounds of free practice, he’s 4th in the standings, and his doubts have remained.

But he has no doubts about his fall.

“We made a change to the motorcycle set-up, because I had problems exiting corners. I lacked traction, and the situation had improved. So, I exited the previous corner faster, I braked at the same point, but the speed was higher. Instead of going long, I tried to close the trajectory, but it wasn’t possible. It was my mistake. I won't repeat it next time,” the Spanish rider assured everyone.

We believe him, but that’s not his main problem. If anything, it’s Magny-Cours that seems haunted by the Ducatis.

“It’s a track where I don’t have much experience in dry conditions on the Ducati. I only managed to do one lap in the morning today, then it started to rain,” he smiled. “On the paper, it’s one of those circuits where I’ll have to defend myself, also because Toprak and Jonathan are very strong here, but we’ll see what happens. You never know. I was able to attack in Donington, even Most. Surely, in the second part, Magny-Cours is the most difficult track for me.”

And riding all day with the rain doesn’t help.

“It was difficult to figure things out,” Alvaro admitted. “In the morning, I started with the new Pirelli tire, but I was only able to do one lap. On the wet track, we worked on the electronics and set-up, because this is a very unique track. In the end, we found something that can help me, so it was a positive day, apart from the fall. Fortunately, I didn’t get hurt.”

Bautista doesn’t know if the Panigale V4 actually has a disadvantaged on the French circuit, or why.

“Three years ago, it was a new track for me. I had never been here, and it always rained. In race one, after a bad superpole, I started iout from the back and had to figure out the track when it was dry during the race. In race two, I was fighting for the victory when Toprack fell and threw me out, so I don’t know what to say. I still have to understand what the problem is with the Ducati in dry conditions here,” he explained.

“It's a Ducati idea for next year. I’ve tried it, and it has positive and negative aspects but, in general, it’s no better than the standard. In the end, we’ ll keep it aside. We might use it in the future and, in any case, the engineers have data to improve it,” Alvaro concluded.

Bautista: “Indonesia will be the most difficult race of all”