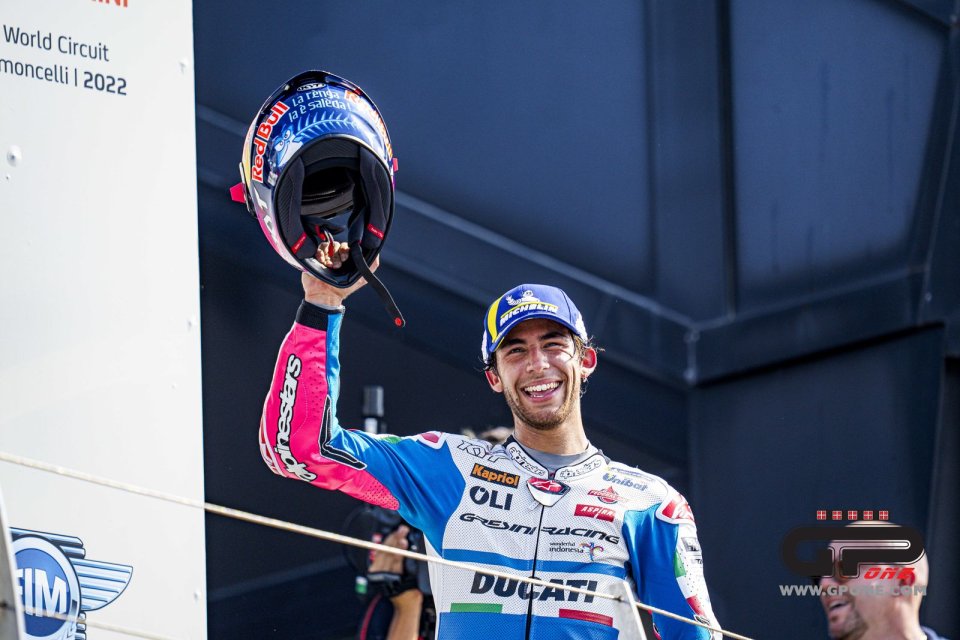 Enea offered spectators a heart-pounding finale in Misano. In the early stages of the race, he joined the leading group, studied the situation, then jockeyed between Bagnaia’s Ducati and Vinales’ Aprilia. As was expected, Enea unsheathed his claws at the end of the race, and his pace became more aggressive. After passing Maverick’s Aprilia, he paved the way to what would be one of the most intense duels of the season. The two Ducatis – Bagnaia’s with perfect trajectories and the Beast’s irreverent one – continued to chase each other on the Misano track until they almost touched, with a photofinish at +0.034. A second podium, which Enea had been waiting for, and a confirmation for the Borgo Panigale constructor, when he’ll be lined up right next to Pecco.

You gave it your all. You were the fastest despite a mistake at the last lap.
“It was a very difficult race,” Enea said. “My sensations in the early stages of the race were strange. I had difficulty bringing the tires to temperature. I also had less power in the first few laps, because I lost traction, especially in the left-hand corners. In mid race, I was able to shorten my distance from Pecco, remaining in the leading group. In the last few laps, I gave it my all. When the tank began to get lighter, I was able to move the bike better. Maybe I had a bit more, but I couldn’t make the most of it at the right time, while Pecco instead managed to give something more. I’m still satisfied with this result. There was also a good duel with Pecco, as well as scoring the best time on the last lap, which is strange for a MotoGP race.”

On that last lap, where you scored even the best time, were you really at your limit or could you have still given something more?
“I think I gave it my all. The way Pecco faced the Curvone was incredible. He always gained something there, and I didn’t want to take any more risks.”

You’ve gotten three wins in this Championship. Would you say that this was your best race, maybe the most challenging?
“Definitely one of the most challenging, but also the victory at Le Mans was good. It’s a wonderful feeling to get on the podium here in Misano. A podium I was missing for some time, and it was nice to be in front of Italian fans, on an Italian circuit. I think it’s a great sign to continue to improve and maintain these results in the last six championship races.”

Are you also a bit frustrated for having just missed the victory?
“That mistake at turn four, I think I’ll take that  with me. I was eager to win because that’s the goal, but sometimes races are also about this.”

What happened at that turn? You got off the trajectory and you reared up.
“I braked really hard there. It was a little mistake that cost me the victory. I wanted to overtake at that turn, but I was off the trajectory, and I preferred to go wide. I think Pecco wanted to brake less, but I braked sharply because I didn’t want to let him go. I kept trying until the last turn, but Pecco braked later, and it was impossible at that point.”

You arrived at the finish alongside Bagnaia. You were just inches away. Can you say that you tried “to the death”?
“I definitely raced to my death. I never stopped believing, even if I knew I’d never get  a chance to attack again. I got very close to him in the last two corners, in the last corner I was undecided, but I preferred not to risk it. I would have fallen, so I bet on acceleration. We were close.”

So, no strategy? To favor Pecco with in view of the championship, perhaps?
“No, definitely not. I had first thought of attacking him at the second to last lap, but then I thought that the last one would be better. I didn’t want him to see me. Unfortunately, I paid dearly for that mistake.”

Pecco is undoubtedly Ducati’s reference. One of the few to have managed to get a total of four consecutive MotoGP victories. What are his strengths? Does he also have a weakness?
“He’s a rider with a very balanced riding style. He has good distance, and an equally good acceleration. He’s able to make a difference in every sector of the race. As for a weakness ... I haven’t been able to find one yet.”

Did pushing the way you did behind other riders lead to problems with tire pressure?
“Actually, it was the opposite for me. It helped me keep the pressure up. At the beginning of the race, I also had problems with the front that kept locking. I had worked a lot with the soft on the rear on this track while, in the end, I opted for the medium today, and it was strange.”

Do you think that you, like the VR46 riders, have had an advantage in being very familiar with this track?
“I’ve also ridden a lot on this track with the Panigale, but the MotoGP is something else, so I don’t think it’s a real advantage. In the first free practice, I still had to understand the conditions of the track to know how to then interpret them during the race.”

It’s been an eventful week for you. Not only did you formalize your contract with Ducati for next year, but you also returned to the podium. The last was at Le Mans. How do you feel? The upcoming Aragon track also favors the Ducatis.
“We know that the Ducatis are really competitive. All this progress, including the next tests, will also be useful for my future on the official team next year. I know I’m facing challenges, but I’m also anxious to put myself to the test.”

Tests are coming up on Tuesday. What will Ducati bring to further improve its package.
“We’ll definitely try out new components. I also talked to Gigi Dall’Igna, so we’ll have many lots of things to test, also in view of the upcoming championship.”

The next championship will be at Aragon, a track that the Ducatis like and that Quartararo doesn’t.
“I like Aragon. I have good expectations for that race. We’ll see,” the Italian rider concluded with a smile.