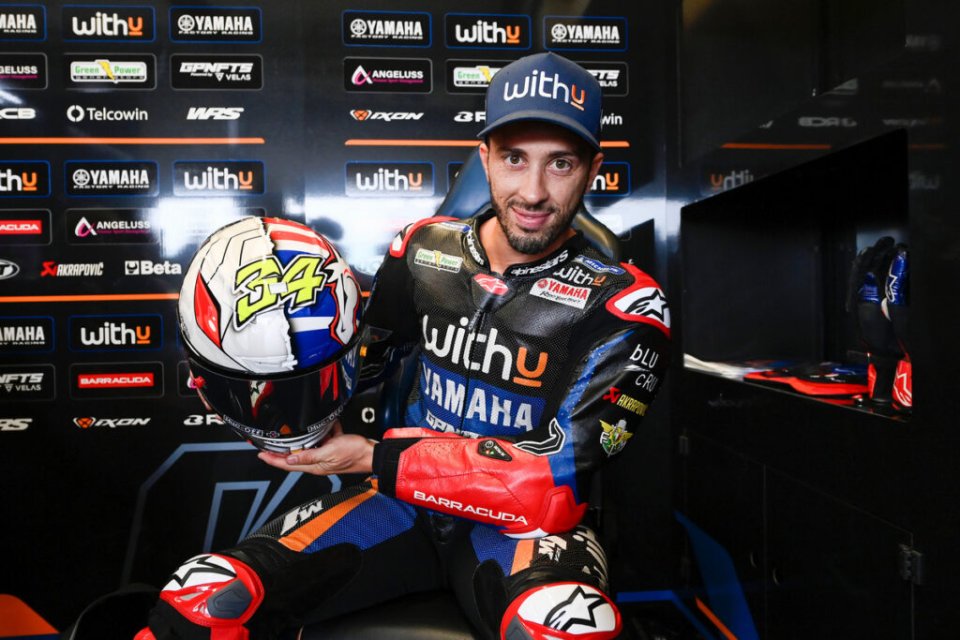 Dovizioso’s last Grand Prix is almost coming to an end. There’s only the warm up and tomorrow’s race left for him before ending his very long MotoGP experience. A career that has lasted 21 years and will end in Misano, his home circuit.

Andrea seems serene as he calmly faces his last race. A mood of his we’ve gotten accustomed to. He'll be starting has last MotoGP race from an 18th position, and he’ll be wearing a special helmet for the occasion made up of a mix of liveries he’s won with in the World Championship.

How did this last qualifying session go?
“Same as usual, unfortunately. I’d like to say otherwise. Actually, I thought I was doing better. I got 33.1 with the worn tires in the morning, which wasn’t bad. In qualifying, I immediately got 32.6. I felt I could do four to five tenths better, but I didn’t get the chance to. It left a bad taste in my mouth, because you feel like you could do better. You have the energy but you can’t. Too bad. We could have done more than an eighteenth, but we hope to do well at the start. Here, the first corners are a bit of a mess, but recovering three or four positions can give us the chance for a few points and maybe a bit more. We’ll see.”

Tell us about the helmet!
“I took all the helmets with which I won a race, a bit all jumbled up, but really nice.”

Which is your favorite?
“More than a favorite, they all have their own story and each one is important in itself. You can imagine how, in twenty-one years, from when you’re fifteen to thirty-six, how you change your approach, whether it’s the victory or the championship. I really like it, aesthetically.”

What are your feelings on the eve of your last race. |What are you thinking?
“I haven’t fathomed it yet. I’m still pissed off about the position, like all these weekends this year. But experiencing this weekend is really great. I didn’t expect all this attention. The legendary Tonino (ed. Cairoli) came. It’s really nice when these things happen spontaneously, like when I’ll be going to the Nations on September 25th in America, for what will perhaps be his last race.”

Should we expect something at the end?
“I don’t know. I don’t know what my friends will do.”

Knowing you, a jumbled up helmet is a surprise.
“Actually, my idea was even more so. I wanted to do it with one for every helmet I raced with. But then, when I thought about it, I realized that it wasn’t possible. There were more than 40.”

Are you going to sleep tonight?
“Yes. You’re much more tense when you have to perform and you’re competitive, but you don’t have everything under control, and you have to do everything perfect to win.”

Are you sad?
“You notice it more later. Now you experience more what’s happening to you, pros and cons, but since I’m not as competitive as I’d like to be, I feel kind of bad.”

Your dad said he’s sadder than you are.
“Yes, definitely.”

Is it almost a liberation for you?
“These results are unexpected for me, and it’s not that great when it happens, and you can’t give it your all because of a technical matter. But then the end isn’t that bad.”

I’m curious. how come you went from 34 to 4?
“I didn’t use the thirty-four anymore when they retired it for Schwantz. Many riders I like used the four, and then mainly for Carmichael in cross.”

Dall’Igna: “We finished the job, 2022 will remain in our hearts”