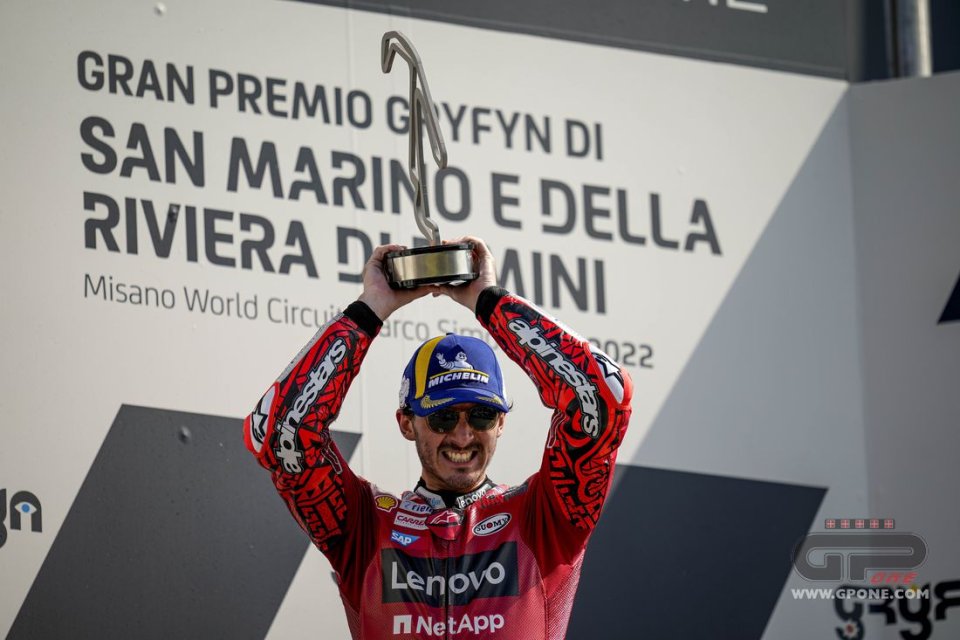 No rider on a Ducati has ever done what Pecco Bagnaia did: win 4 races in a row. Today's success, at Misano, was the poker that the Piedmont rider put on the table to demonstrate his strength. Twenty-five points, on a day in which Quartararo found himself short of breath, Pecco gave another yank in the standings and now the classification is looking good for him.

If 4 races ago, at Sachsenring, he was 91 points behind Fabio, now the gap is less than a third: 30, when there are still 6 GPs to go. Bagnaia is proving to be the rider most in form right now and everything seems easy to him. Even though he thinks differently.

"Today was very hard, believe me, I gave my life to bring this victory home - he declared - At the beginning of the race I had no grip, neither front nor rear. I got to turn 4 and the front locked up, the next lap Miller crashed and I saw Enea lose the front at turn 14, in the next one it happened to me at the Curvone. I was scared, I wasn’t able to be fast”.

What did you think about?

“Being clever, because the track conditions after the Moto2 race were very different from yesterday. However, I realized that as the fuel dropped, the situation improved, so I started to go down a tenth at a time and in the last 5 or 6 laps Bastianini and I were incredible. On the last lap I did my fastest lap of the race, it had never happened to me".

You kept Vinales at bay first and then him ...

“I always felt someone breathing down my neck and didn't think of anything, just being clever. I didn't try to close the trajectories, but to be fast in the middle of the corner because Enea was faster than me in acceleration”.

Did you think about the Le Mans mistake?

Were you afraid of an attack by Bastianini?

"Afraid no. I would have expected it, I see no reason to give team orders right now and it would have been more than legitimate if he had done so”.

He said he would have wanted to pass you at the Curvone ...

“In my opinion, at that point he had little chance, but in the next corner he could have, because both Enea and Maverick recovered at that point”.

What are Bastianini's strengths and weaknesses?

"Enea’s strengths are the ability to brake hard, bringing a lot of speed into the corners and managing the tyres in the last part of the race. Perhaps the weak one is the first few laps”.

Let's look at the ranking: you are now 30 points behind Quartararo.

“That is still a lot, I don't want to think about it. I prefer to think race by race, like today, if I have the chance to win I will do it. The important thing is that now I'm constant ".

When will you start thinking about the championship?

“When I get to 5 or 10 points behind Fabio. I have already made the mistake of focusing on the classification and I was wrong, the important thing now is to try to be competitive, to win. Better to focus on work and the tests on Tuesday and Wednesday, which will be very important for next season. Maybe we can already use some new things at Aragon”.

Did you expect Quartararo to be in such difficulty today?

“I thought he could fight for the victory; he had had an incredible pace all weekend. Sometimes having a good top speed helps”.

Do you think he is suffering psychologically?

"I don't know, last year he was very strong here and this weekend too. For sure at this moment we have an advantage in acceleration and top speed and we have made up for the disadvantage in cornering. They still manage to make the bike turn better, but we are working on it”.

What do you like most: the 4 consecutive wins or having won 10 of your last 20 races?

"I don’t know. Right now I'm on very good form and I just have to think about continuing like this. These are important numbers, but I don't want to give them too much weight. We will see at the end of the season”.

Do you feel a different attention from the public?

"Today, at the Tramonto curve, I saw many flags with the number 63. It had already happened at Mugello, but here there were even more, I want to continue like this".

Dovizioso said that he is leaving MotoGP in very good hands.

"Right now it's a bit too optimistic to think so, but the Italian riders are all very strong, especially the Ducati ones. We are all young and hungry to stay at the front, our generation is very promising. I want to take the opportunity to thank Dovi, because if our bike is like this today, it is also thanks to what he did”.

First title decider at Sepang: the combinations for Bagnaia to become champion