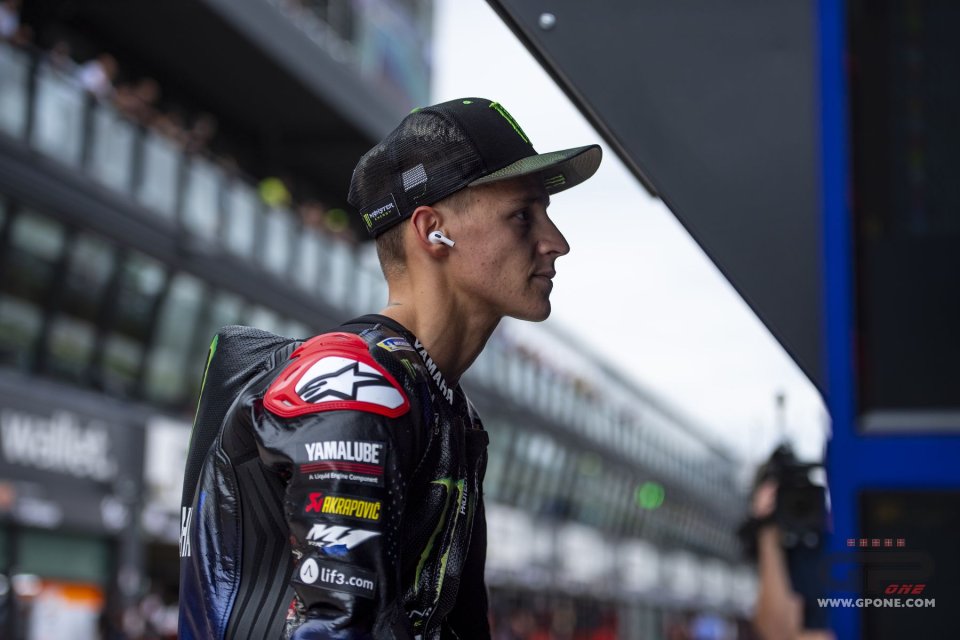 Fabio Quartararo was convinced after the excellent Friday that he could be one of the protagonists in qualifying at Misano, but things did not go according to plan and it was above all the rain that ruined the Frenchman's day. As he explained in the meeting with journalists at the end of qualifying, it was not some problem of adapting to the grip conditions of the asphalt, but rather an endemic problem of his Yamaha which in certain conditions becomes impossible to stem.

We are obviously referring to the lack of power of his M1, a hot topic for several seasons which, however, seems to become increasingly problematic for a rider who deserves a bike more up to his talent. Fabio explained in detail why the low horsepower of the Yamaha engine is a problem even in the rain.

"It was difficult, because I thought it was completely wet, but I immediately understood that it wasn't - explained Quartararo - The conditions were really complex, impossible to pass on the curbs. In these conditions it is difficult for me to be fast, because I can't take advantage of the whole track and get cornering speed with the Yamaha, the only strong point we have ".

“It’s the most I could do, but I am disappointed – explained Quartararo - In this condition, some corners I could not go on the kerb, like Turn 6. I could not really carry speed like we have to do with the Yamaha and we don’t have any acceleration. Basically Turns 6 to 7 was not great, Turn 15 I had to use less corner speed because we could not really use the kerbs.”

Did the conditions surprise you in some way?

"Before I went on the track, I checked the asphalt and on the straight it seemed completely wet, so I thought it was impossible to go out of the pits with slicks. When I saw Franco enter the track with slicks I thought it was a mistake. The team sent me a message on the dashboard to stop in the pits, afterwards it took me many laps to understand how much I could push with the slicks. In reality these are conditions did not help us, the grip was good and we always have a power gap to fill ".

Today you would have liked to have qualified better also to take advantage of Bagnaia's penalty on the grid.

"Given Pecco's penalty, I knew I had to do a good qualifying to take advantage of it. But in the end Ducati is now the benchmark on the track. Today I gave my best as always and I'm 8th. At least I know that in normal asphalt conditions I have a good pace. I'm disappointed but it’s always the same problem.”

You seem to be complaining a little about your Yamaha.

"I don't want to complain, because everyone knows where our problem is. But when you fight for pole, you have a lot more fun than when you fight for the third row. Today I rode like in FP1, but it's not normal. Usually we have the potential to fight in normal conditions, but today it wasn’t possible. In the tests I hope we can make some progress. The truth is that here today we were very far from the others on the flying lap. "

Qualifying is usually your strong point.

"This year the most important thing is qualifying. If I have good pace, as I think I have here, I know that it is difficult for others to overtake me. But starting further back changes everything. It is undoubtedly something we have to work on. That's not good. "

Is the podium still possible?

“It’s a track where there’s a lot of acceleration and braking. That’s the problem, where can I overtake? Of course in Austria I could overtake but the risk I’m taking in any overtake is so much. I will have to make a great start, great first lap and play a lot in the first four corners.”