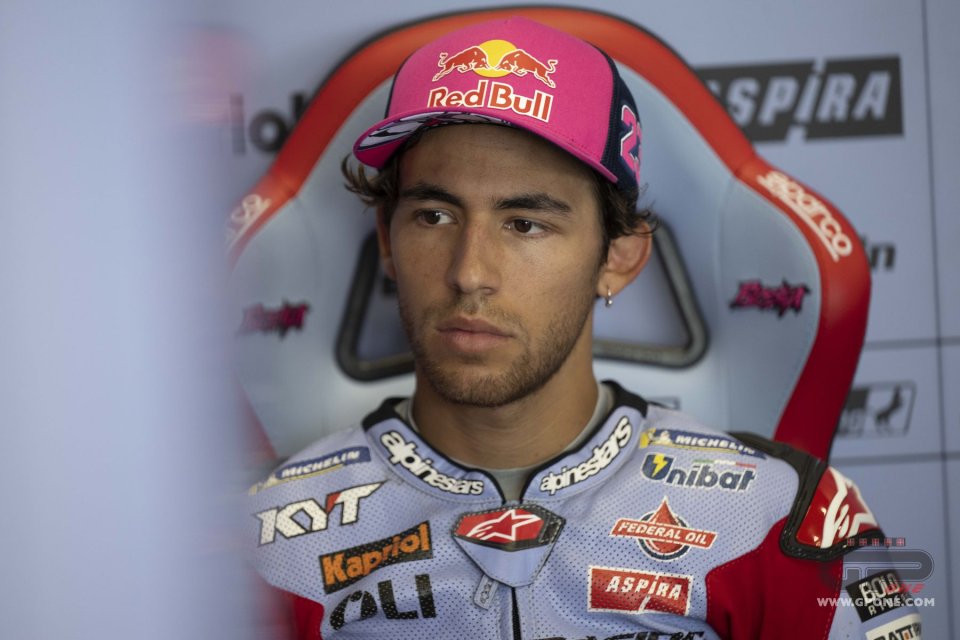 Enea Bastianini topped the timesheets on Friday at Misano, a result that he had never achieved up to now since he has been racing in MotoGP, so much so that the rider said it was 'my best Friday ever in MotoGP'. A perfect way to start his first GP as a future Ducati Factory rider, but it was also the weekend in which Enea learned that next season he will no longer have Alberto 'Pigiamino' Giribuola beside him in the garage, a piece of totally unexpected news.

"I found out the day before all of you, so it was a cold shower for me too. A shame because I had a really good guy next to me, with Pigiamino I have an excellent relationship, great feeling. We are in 100% harmony, but sometimes you know that anything can happen in this world ".

Let's talk about the present. It was a great day.

"I did one of my best laps ever and I'm happy. We have to stay focused, I think Fabio is the best at the moment but at least on the time attack I responded well. I think it was my best Friday ever in MotoGP. I don't think I've ever finished the first day at the top. It's important for me to be fast right away, certainly the fact that I’m racing on my home track, which I know well, has had an impact, but then you always have to go out and do the job".

Do you think that the confirmation of being in the factory Ducati team in 2023 has had an impact?

"I think that the contract release had little impact. I always answer this question in the same way. In Austria, even though I didn’t know anything, I still got pole. So…".

"Yes, but then in FP2 I felt good, even though I was a little slow at the beginning. I think we will be able to close the gap for Sunday. In any case, even if it rains, it is important to lap a lot and gain experience for the future. I'm satisfied with how it went today; I'll start from there".

Are you a candidate for the pole?

"I think tomorrow Pecco is the man to beat for pole, he's always very fast here. I don't think the penalty is a big problem for him, I started 18th in 2021 and finished 3rd. If he has the pace, it won’t be a problem ".

How does Pecco seem 'better' to you now?

"Pecco in this phase is very fast in the first part of the race, but above all he is using his head a lot more than at the beginning of this world championship. I think I have to learn from him, because I too have done good races and others less so. It’ll be nice to work with him; I will be able to see closely what he does. I am already having an exchange of information with Diggia, I think it’ll remain the same. I don’t know what sort of rapport he has with Jack and what happens in the garage. For sure the working system will be different, I'll have to help myself to be ready for the first race ".

You will also be asked to try new components. How do you see yourself in the role of test rider?

"A delicate situation. I still don't know how sensitive I am as a tester of new parts; I will have to understand well how to work in this respect as well. I'm a rider who sometimes feels half a turn of preload on the rear monoshock, so it will be essential to work well".

Marc wants to create a community that unites all of his fans: "I need to have them close in this very important year"
6 hours 8 min ago

After the last two years spent in MotoAmerica, next season Hector Barbera will return to racing in British Superbike with TAG Racing Honda
2 days 12 hours ago

The first of four episodes will be available starting January 27th, while the final episode will be released on February 7th. For now, it’ll only be...
1 week 7 hours ago