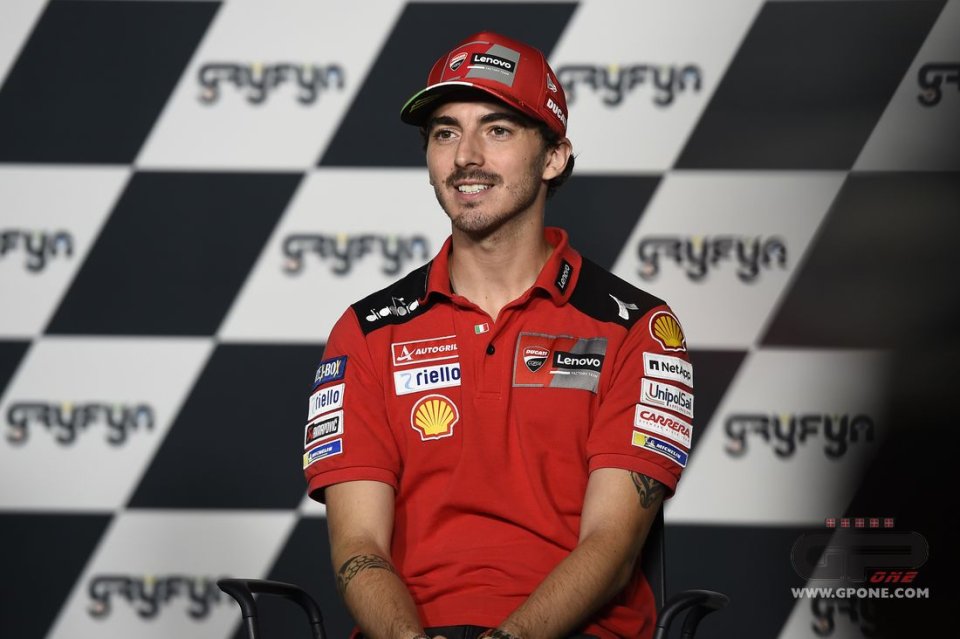 It’s a smiling Pecco Bagnaia who comes off the back of three consecutive victories. He seems to have become one with his Ducati and Misano is his talisman track. The Italian is in perfect shape and after the three-in-a-row in Austria, his name is now next to those of the greats: Valentino, Stoner, Marquez, Pedrosa, Lorenzo. Only they, before him, had managed to achieve three victories in a row.

“I am very happy, but I still have a lot to do - he underlined - They have won a lot, they have done great things, so for my name to be matched to theirs I have to prove more. I still see myself as a young rider who still has a lot to learn, I have to deserve it to be compared to those champions”.

He will not miss many opportunities, after all the title is still possible this year, even if the 44 points that separate him from Quartararo ... "are many - he admitted - I'm happy to race in my home Grand Prix, since the beginning of the year I’ve been looking forward to this time to enjoy my home crowd. But I'm sure it will be a tough battle, Fabio was very fast last year, Espargarò will be in front, there will be many strong Italians on Ducatis and I think Morbidelli will be too. Furthermore, the weather forecasts are not good and this will complicate everything, but I think I will have a good chance to do a good job”.

On the production bike, Bagnaia has no rivals at Misano. His secret is to do the Curvone ... in full.

“I'm not brave enough to try it with the MotoGP - he smiled - The Panigale V4 has a shorter gearbox, it's simpler: I let the limiter in to close the line. I know everything about this track, it's my training circuit, but in the end the other riders are also very competitive here, just look at what Marquez and Quartararo did last year”.

Speaking of Marc, his return seems close. Will he be able to influence the title fight?

"It is difficult to say now - Pecco replied - He is one of the greatest and he will certainly be fast and will be at the front, even if a 3 months stop could weigh heavily".

Better to think about certainties then. The latest, in chronological order, is that Bastianini will be his teammate starting next year.

"I’m happy – he declared - I didn’t want to help decide who would be my team-mate because I think it’s a decision that needs to come from the team and not the rider. In any case I think we can do a good job with Enea. I know him very well from when we were young. The most important is to let him know and to let him learn our type of work that can be great."

Bagnaia then went into further detail.

"During the race weekend, I work a lot with Miller, we talk to improve, we share the tests of the tyres - he continued - For Enea at the beginning it might not be that simple because he is not used to it, but we will try and see if he can accept this method ".

The last words were for Dovizioso.

“It will for sure be an exciting weekend for him. We all have good memories of Andrea, he did great things with Ducati, he was the only one who could fight against Marquez when he was at his peak. We will miss him, he is one of the most open people in the paddock” he concluded.

This is the last act: the Suzuki Racing website closes. It is unclear why Suzuki does not want to turn it into a page commemorating the many...
22 hours 18 min ago

THE 2023 CALENDAR MotoAmerica, the American series, will have to do without Danilo Petrucci this year, who has decided to continue his career in...
2 days 14 hours ago

THE 2023 CALENDAR The Suzuka 8 Hours, valid for the FIM World Endurance Championship, will take place in 2023 one week later than originally planned...
3 days 23 hours ago