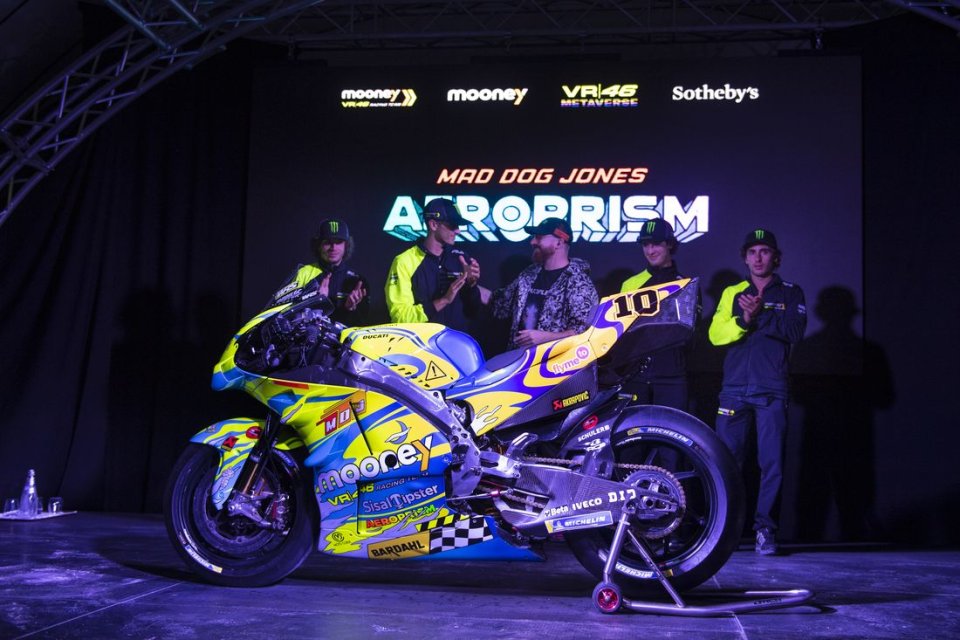 Art, Metaverse and MotoGP, all in one project. This is the idea that involved VR46, artist Michah Dowbak (aka Mad Dog Jones), Mooney and VR46 Metaverse. At first glance, it may seem like yet another livery to celebrate the home Grand Prix at Misano, but there is much more to it than that.

Aeroprism is a tribute to motorsports made by Mad Dog Jones, one of the most popular digital artists (Replicator, one of his works, was sold for 4 million euros). “For me MotoGP and F1 are the pinnacle of design - he explained - After working with Hamilton to make his helmet for the Miami race, I received a message from Valentino. I have followed him since childhood, I was obsessed with his style ".

The result is a livery that wants to combine the past and the present, inspired by the historical ones of the Doctor but updating them in a completely new key.

Luca Marini, Marco Bezzecchi, Celestino Vietti and Niccolò Antonelli will use the liveries in the race, but the project will continue. In fact, Dowbak has also created an exclusive series of four NFTs inspired by the riders and bikes of the VR46 team. The two special liveries used in the race by Marini and Bezzecchi, signed by their respective drivers, by Mad Dog Jones and Valentino Rossi, and the two leathers worn during the race, will be combined with the NFTs made by the artist. The set of these unique pieces will make up four works of art, each consisting of a physical and a digital piece. It will be possible to bid on Sothebys.com starting September 4th, coinciding with the San Marino Grand Prix, and will close on September 8th.

"With this project we have continued the tradition of Vale's special liveries, we can say that it is an evolution" explained Alessio 'Uccio' Salucci.

And it is only the first step: "we aim to launch a second project with Michah and Valentino already by the end of this year" revealed Jean Claude Ghinozzi, CEO of VR46 Metaverse. "This is a Web3 project - he continued - that will allow fans of Valentino and VR46 to learn about immersive worlds, where they can be active members of the community."

For now the bikes of the VR46 team are racing on the web, waiting to do it on the track.