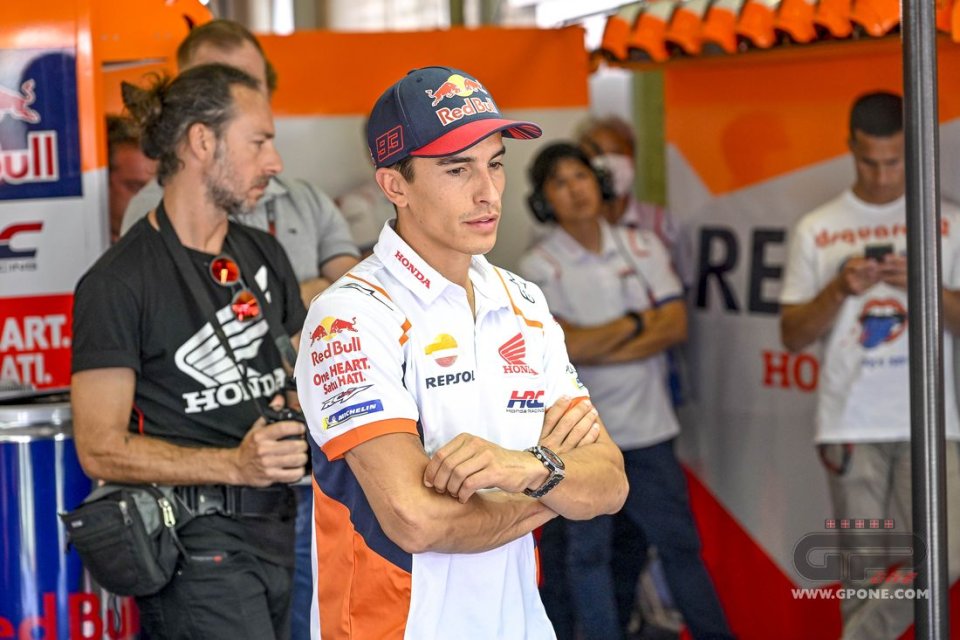 Marc Marquez has been given the green light by the doctors to increase the intensity of his training, his humerus is healed. It is the first step towards returning to the bike, so recovery time has not yet been revealed. In Austria, the Spaniard was cautious: “if it takes an extra week, I'll wait”. Haste has been a bad advisor in the past and he certainly does not want to repeat a mistake that has cost him dearly.

His (correct) patience, however, clashes with the needs of others, who would like to have him on the track as quickly as possible. We are talking about Honda, but also about Dorna.

Why HRC needs Marc is clear, just look at the standings. Although Marquez has only raced 7 of the 13 held so far, he is the Honda rider with the most points in the standings. He has 60, against Takaaki Nakagami's 45, Pol Espargarò's 42 and his brother Alex's 29. The RC213V has problems - no one doubts that - but the other riders are not up to the task. Without forgetting that at least two (Pol and Alex) are leaving, which further complicates the situation.

Alberto Puig has launched an SOS: “If Marc weren't at the Misano tests, it would be a problem for us. Without him we would continue to proceed blindly”. An admission of how in two years, from a managerial point of view, it has not been possible to create a line-up that could (at least in part) make up for the lack of its own star.

There’s no point talking about the past: the present tells us that the bike is not going well and that they need to work hard to improve it for next season. To succeed, however, Marc's contribution is essential. The two days of testing at Misano are therefore very important to get first indications from him, in order to follow them in view of the tests at Valencia at the end of the season.

Marquez got the green light from the doctors just two days ago, which means that time is very tight. The tests are scheduled for Tuesday 6 and Wednesday 7 September, so in two weeks the Spaniard is supposed to work on his muscles and (probably) organize a day on the track to understand how he is on the bike. Difficult, but not entirely impossible. If everything goes smoothly, he will have saved Honda once again.

So what’s Dorna got to do with it? It too desperately needs Marquez. This year, things are not going very well: apart from a few exceptions (i.e. Le Mans), the number of fans in circuits has decreased and so has the audience in front of the TV screen. Not for nothing has it been decided  to introduce a sprint race from next year to try to revive the fortunes of the championship.

Not that the current MotoGP is bad, but it lacks a bit of ... pepper. Marc also said it in a recent interview with DAZN: “the public likes morbidity”. He meant those rivalries that sometimes go over the top, without doing good at all costs. Quartararo, Bagnaia and Espargarò do not pretend, they are really respectful of one another and also friends, as much as they may be rivals. In truth, the spark has not yet been triggered, because there has never been a real fight between them, a hand-to-hand battle for the victory, instead there have been many duels at a distance.

What do we remember from the last few years? The battles on the last lap between Marc and Dovizioso (whose relations have always been good, by the way), those between Valentino and Lorenzo or Stoner. That kind of show has been missing in recent seasons and many think that Marquez can bring it back.

Also because, usually in sport, newcomers have to beat the leader to make a name for themselves (as Verstappen did against Hamilton in F1, controversy aside) but this time it was not possible. With the accident in Jerez in 2020, Marc left the field free. Neither Mir first, nor Quartararo then can say they beat him. Only Bagnaia, last year in Aragon, can boast of having won a tug-of-war against him (even if he was not at the top of his form).

As much as they can do (and Fabio, Pecco and Aleix are doing extraordinary things) it never seems enough. Whether this is true or not, the only way to convince (a certain) public of the opposite is to challenge the champion, namely Marc Marquez.

He is ready to accept the fight, waiting to see if his body will be too. He certainly has broad shoulders, because on them he seems to have to bear the weight of Honda and that of MotoGP.