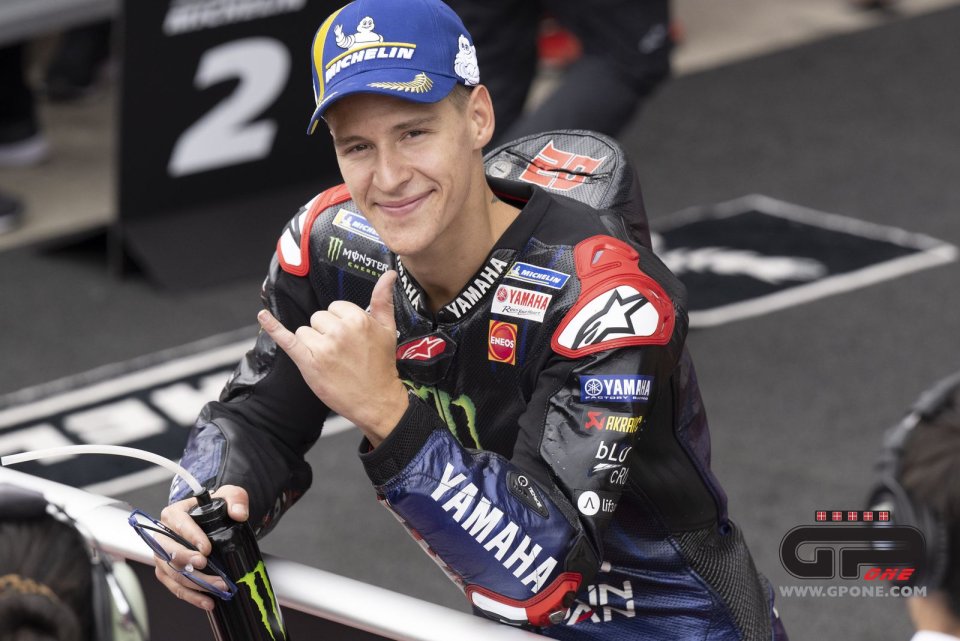 The Austrian Red Bull Ring circuit represented a really tough obstacle for Fabio and his Yamaha. After a start to the week in which the supremacy of the Ducatis seemed a certainty (and it was to some extent), the expectations of the French rider weren’t the most optimistic. The race and the fortuitous events, such as Enea's premature exit from the race in the first laps and Martin's crash in the last stages, allowed Fabio a glimmer of hope that he couldn’t ignore, like when he passed MIller's Ducating at the chicane during a really tight change in trajectory. A double success for Quartararo, who managed to transform what would most likely have been a defensive race into a second step of the podium. The first goal was to maintain his advantage over Aleix's Aprilia, his main rival according to the current rankings. The second was to limit the “damage” of Bagnaia's Ducati that, in the last few races, seems to have found the right pace and is dangerously moving up in the rankings. But this race also has a third important aspect for the French rider, namely, that his Yamaha can also compete on circuits where his rivals seem to be favored, despite some technical limitations. So Fabio maintains the top spot in the rankings with his 200 points, followed by Aleix's Aprilia, with 168 points, and by Bagnaia's Ducati, fast approaching with 156 points.

You gave it your all in this race, you were surrounded by Ducatis. It’s not a victory but it comes very close to one.

"It was a great race, especially in the first laps," the French rider said. "At the beginning, I had a problem getting the front up to temperature. It took me a couple of laps, then I picked up the pace from there. Even the rear occasionally gave me problems. I saw Joan Mir's highside when he crashed. Overtaking wasn't easy, but today I managed to be aggressive. And, even if I think I made mistakes, I'm always managed to recuperate. It was definitely a difficult race, but a good race."

The key moment of your race could be defined by when you passed Jack Miller on lap 25 in the chicane. Maybe one of the best of your career. Can you tell us about it?

"I think Jack braked a bit early on that lap, and I a bit late. At that point, I said to myself that I should try. It was a point where, during free practice, I thought that overtaking would be impossible, so I also thought Jack wouldn’t have expected it, and it worked."

After the disappointment in the past two races where the expectations for you and your Yamaha were higher, many wouldn’t have bet on you here in Austria, with all these Ducatis in the front rows. Does this second place not only help you in the rankings, but can it also be a game changer for the championship?

"Since the FP2, I’ve always ended up among the Ducatis. Seeing six of them in the top ten positions was certainly stressful, so this result definitely lifts my spirits a lot, even considering the upcoming races scheduled."

Did you also use the tire management strategy? Were you afraid that if you pushed behind the Ducatis right from the start you might have problems?

"Actually, like I already mentioned, I had problems warming up the hard front during the first laps. Then, at the end of the race, things got normal. The only corner where I had some problems was the fourth."

What is your greatest success after today's race: losing only five points in the standings from Pecco, or having gained ten points from Aleix?

"Both are excellent results. In the end, you have to finish the races in front of the others in order to win the title. But maybe I should also call Casey Stoner to get some advice from him, like Pecco," Fabio said jokingly.

Aleix told us yesterday that you’d be the best on the track today, and that if you had an even more competitive bike you’d be the absolute leader. Do you think you still have room for improvement? What’s your opinion?

"I don't like to think I'm the best rider, or not the best. I race giving it my  all, despite some technical difficulties with the bike. Here, in Austria, I expected things to get worse, to be honest. We have short gears. At the end of the first laps, I was able to keep up with Jack, but then I couldn't keep up. Keeping up with the Ducatis isn’t easy. I can’t say if they’re at their best. I don’t want to seem pretentious, but I’ll gladly accept Aleix's compliment, and I thank him."

Two races ago, your main opponent in the championship seemed to be Aleix. Now Pecco has  recuperated many points in the last few races and is closing the gap.

"At Silverstone, I made it clear that Pecco is the man to beat in these last few races. He’s the favorite on many of the upcoming circuits, so he’s also one of my main rivals. Misano will be an interesting testing ground, but also the overseas circuits on which we haven't raced for more than two years."

How do you feel having to manage the tires at each race? How do you adapt?

"Fortunately for us, our bike is not very sensitive in that respect. Even when we change something, the bike always remains the same."

What would you need to be able to give that extra something?

"The first three gears allowed me to keep up with Jack's Ducati. On the other hand, the fourth, fifth, and sixth need a bit more power. At the chicane, at the end, you get to fourth, and this helped us keep up with the Ducatis. We used the sixth gear only in two points of the track while usually, here in Austria, it was only used at one point."

If the race had lasted a couple of more laps, do you think you would have been able to catch up with Pecco?

"The races are twenty-eight laps. Thinking of what would have been is useless. I arrived late, and I didn't succeed."

"I think you could’ve done it!" Bagnaia replied confidently, and they both laughed.