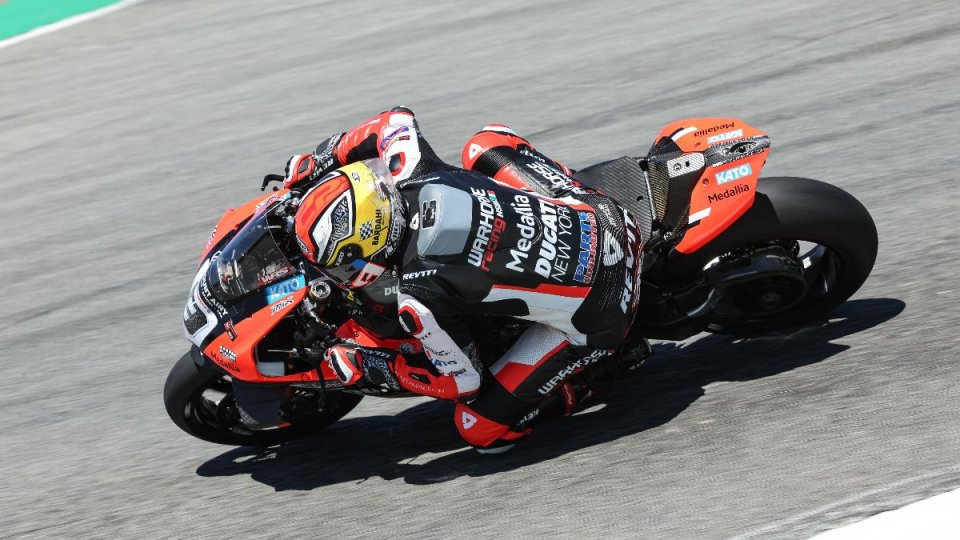 While last year’s MotoAmerica Medallia Superbike Championship was predictable, the 2022 series is predictable only in its unpredictability as the series heads to Pittsburgh International Race Complex for the Superbikes At Pittsburgh, Presented by LaRoche Aviation Services, round, August 19-21.

Last year Jake Gagne won 17 races, including 16 in a row. The only hiccups in his championship-winning season were a blown motor in the opener at Road Atlanta and a crash and remount to 12th place in the pouring rain at Barber Motorsports Park after he’d already wrapped up the title. When you watched a MotoAmerica race, you assumed Gagne was going to win and 85 percent of the time he did. That’s predictability.

Gagne and his Fresh N Lean Progressive Yamaha Racing YZF-R1 have won eight of the 14 races, or 57 percent. He’s crashed out of the lead in two races and suffered a mechanical issue that knocked him out of the first race of the year, for the second year in a row. Gagne looked to be on a roll heading into race two at Brainerd International Raceway with five wins in a row and a lead in the championship for the first time all season. With his high-speed race-two crash in Minnesota, all that was gone. The win streak and the points lead. Goodbye, predictability.

Warhorse HSBK Racing Ducati NYC’s Danilo Petrucci led the point standings all the way up to the 13th race of the year when he lost it to Gagne by three points after the latter’s race-one win at Brainerd. With Gagne crashing at high speed and making his Yamaha look like it went through a woodchipper in race two, Petrucci was there to capitalize with his fourth win of the year and his first since April. And the points lead went back to the Italian. Predictable? Hardly.

Which brings us to the Superbikes At Pittsburgh, Presented by LaRoche Aviation Services, round at Pittsburgh International Race Complex this coming weekend, August 19-21. The bottom line: 13 points now separate the two at the top of the standings in the Petrucci vs. Gagne, Ducati vs. Yamaha showdown with six Medallia Superbike races still to run.

Petrucci’s and Gagne’s seasons have been polar opposites. While Gagne has been dominant in the races that he’s won and has earned pole position in every race but one, his major flaw has been the two crashes (Road Atlanta and Brainerd). Petrucci, on the other hand, with the exception being the series opener at COTA, hasn’t shown the pace yet to beat Gagne in a straight fight, but he’s been there in nearly every race and has picked up the pieces whenever Gagne has left them on the table.

Petrucci hasn’t made any race-ending mistakes thus far, which is impressive given that he has next to no knowledge of the tracks. His only non-points score was his DNF at Road Atlanta when the Ducati failed him. Otherwise, he’s scored gobs of points in every round with four wins and eight podium finishes in the 14 races. That translates to the former MotoGP star standing on the podium in 85 percent of the races thus far.

Although he’s had the best year of his career with his new team and as Gagne’s teammate, Cameron Petersen is on the outside looking in when it comes to his championship chances. Mathematically, he’s still in the hunt but making up 38 points on Petrucci and 25 on Gagne is imaginable, but not probable.

Petersen has been on a roll of late with seven podiums in a row a streak that started with his victory in iffy conditions at Road America. While Petersen is 38 points behind Petrucci, he has pulled clear of fellow South African Mathew Scholtz.

While Petersen is on a good roll, Scholtz’s is the opposite. With six podiums (including a victory) in the first seven races, Scholtz’s season started strong. But since that victory, also at Road America, his season has unraveled a bit and he’s gone the past seven races without a podium. All that has left him 70 points behind Petrucci and 32 points behind Petersen in the battle for third.

Tytlers Cycle Racing’s Hector Barbera is fifth in the championship as he has been for the entire season and is 14 points ahead of his teammate PJ Jacobsen, the latter coming off a second podium of the year at Brainerd.

Vision Wheel M4 Suzuki’s Richie Escalante’s first Superbike season was picking up speed heading into the Brainerd round, but a crash and the concussion that went with it, put him out of the points in both races. He is seventh, 15 points behind Jacobsen and 13 points ahead of his teammate Jake Lewis, who returned from injury to finish ninth and seventh in the two races at BIR.

Aftercare Hayes Scheibe Racing’s Ashton Yates is ninth, three points behind Lewis and 11 points ahead of Disrupt Racing’s Hayden Gillim, who rounds out the top 10 heading to Pitt Race.

The two MotoAmerica Medallia Superbike races at Pitt Race will take place at 3:10 p.m. (Eastern) on Saturday and Sunday.

The official announcement came today. The rider from Ascoli: "I have no expectations other than to return to a serene and clear climate inside the...
15 hours 33 min ago

This is the first MotoGP pole for Honda since Pol Espargaro at the British GP last year (21 races), ending the longest sequence of successive premier...
20 hours 27 min ago