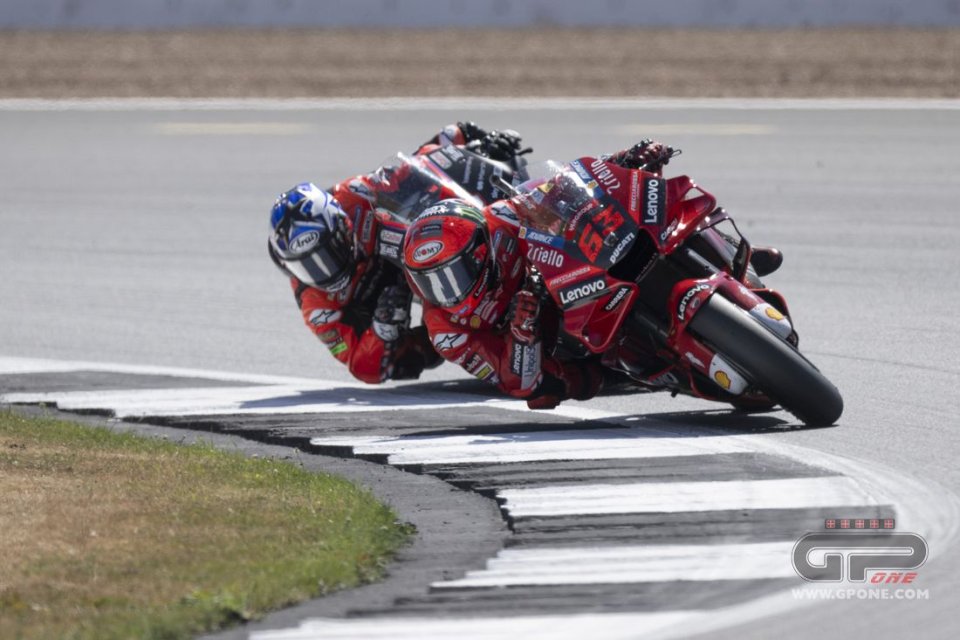 The Silverstone Grand Prix gave rise to many interesting ideas, not only about how the world championship standings has changed. Pecco Bagnaia won the race but he was not the fastest rider outright, Maverick Vinales showed that his feeling with the Aprilia is almost perfect and Enea Bastianini was the protagonist of a good comeback despite his Ducati missing one wing.

Enough to start analysing what happened.

Bagnaia: he wasn't the fastest, but he won

We already knew that Bagnaia was capable of being very fast, but in England he was able to do something he had never been able to do before: win without being the most competitive. To realize this, just look at the ranking of the fastest laps in the race. Pecco is only in 13th position.

His best lap was identical to that of Oliveira, 6 full tenths slower than that of Alex Rins (who also set the new race record), even Remy Gardner (18th at the finish) was faster than him. All this, however, is not a demerit but rather the opposite. Ducati’s rider from Piedmont has in fact added another arrow to his bow: now he knows how to manage the race perfectly, not only relying on the chronometer but also on his head. 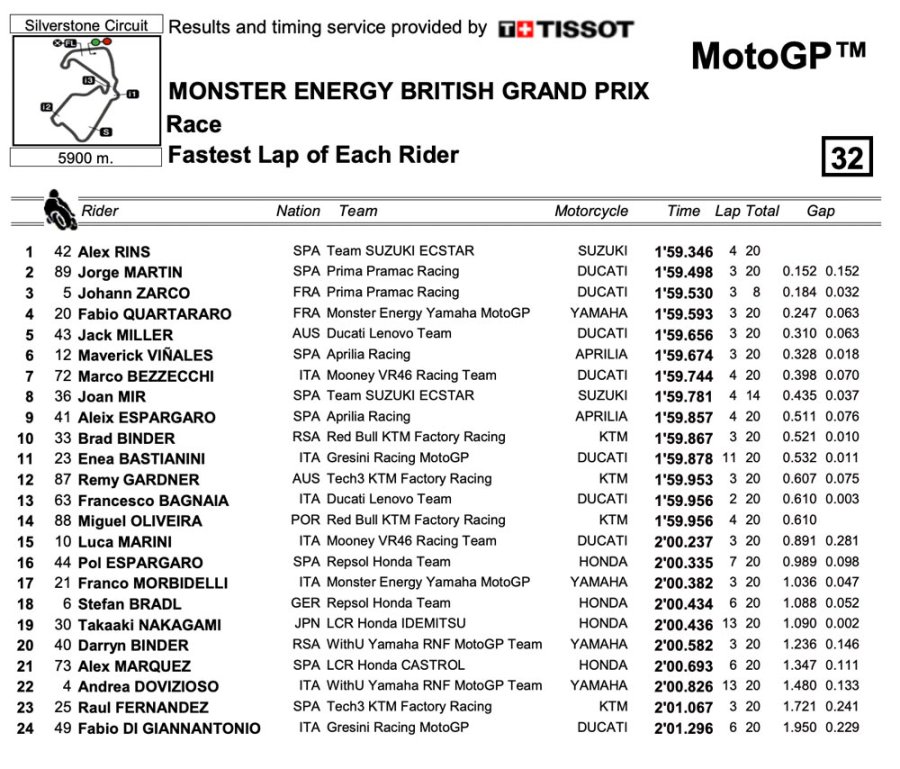 If we look at his lap-by-lap times, there are other interesting data. Bagnaia was the fastest on the track for two laps: on lap 8 when he was chasing Rins and on the last one. In the last few stages, Vinales caught him up, tried to overtake him on the penultimate lap, and at that moment Pecco laid all his cards on the table. Unlike what happened in the past, he didn't get nervous about his opponent's comeback and maintained the necessary margin to keep him at bay.

Vinales: back to being the racer of the past, he had 6 fastest laps out of 20

Let's now move on to Vinales, who did his best race since joining Aprilia. Starting from the front row helped him up to a certain point, because at the start he lost 4 places, finding himself in 6th place. The fight with Martin in the early laps and the 3 behind Quartararo before overtaking him certainly penalized him, but he will certainly learn from certain flaws.

Maverick, however, was the fastest on the track for 6 of the 20 total laps, showing his best from the middle of the race onwards. But when the gap from Bagnaia was already over one second and, counting that the gap at the end of the race was just over 4 tenths, it is clear where the Spaniard lost his chances of winning.

Despite everything, Vinales is starting to do on the Aprilia the same things that made him competitive with Suzuki and Yamaha, giving his best in the final stages: and it is no coincidence that from lap 17 to lap 19 he was the best. Silverstone is one of the tracks where he expresses himself best (his first MotoGP victory was there in 2016) but the most seems to be done. 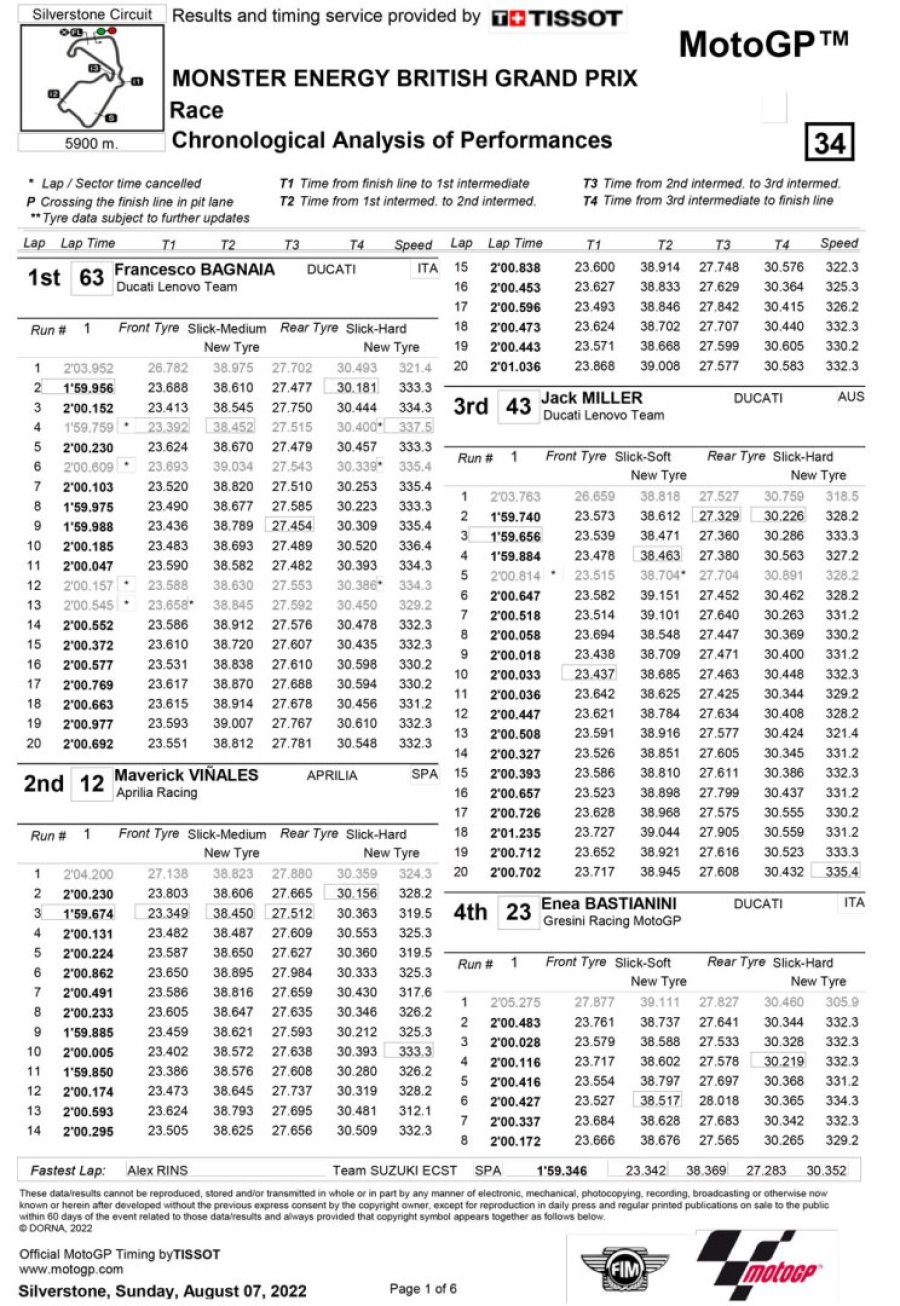 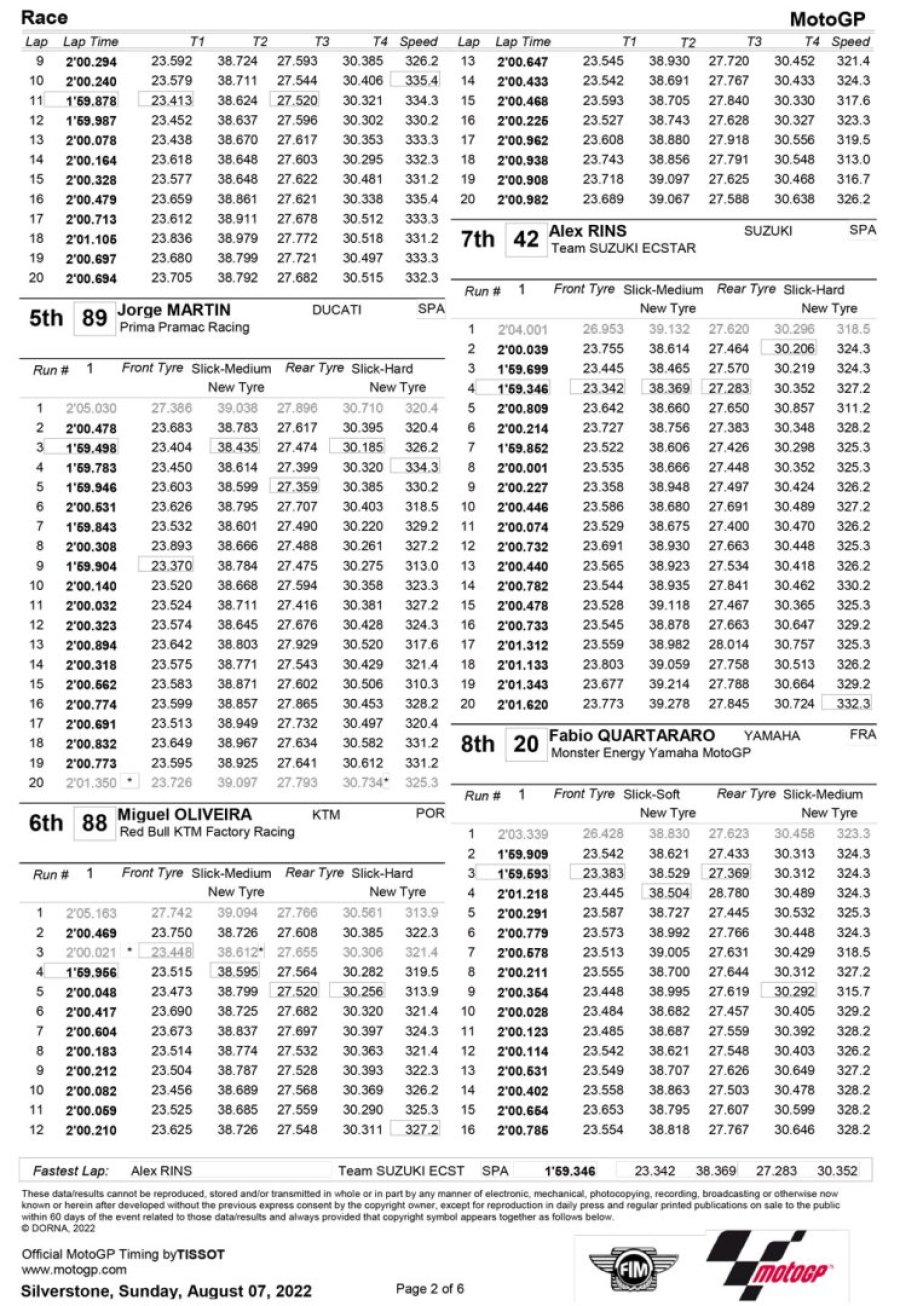 Bastianini: a benchmark pace, he lost the race in qualifying

All that remains is Bastianini, whose contact at the first corner cost him dearly. Not only because he lost a wing (thus finding himself with an 'unbalanced' bike) but also because in the first lap he lost 3 positions: going from 8th to 13th place. In terms of time, he already lost 1.3s from Bagnaia on the first passage over the finish line, which became 1.9 on the second, until he reached 2.2 on the fourth. Furthermore, Enea remained behind Brad Binder for 8 laps before starting his comeback. On lap 9 he was 2.8s from Bagnaia, on lap 10 2.9, then he started to catch up (even though he had to overtake) and at the line he finished 1.6s behind Pecco.

For the Gresini team rider, the best moment was from lap 12 to lap 15, when he was always the fastest on the track. Like Bagnaia and Vinales, the Bestia had the hard rear tyre, but unlike them the soft one on the front (the same choice as Miller, who finished on the podium). Enea has always shown perfect tyre management and even at Silverstone he did not prove himself wrong.

At the end of the day, it can be said that Bastianini lost out in the fight for the podium (and, why not, for victory) not in the race, but on Saturday. Qualifying is still his weak point and starting from the third row (he was 8th) made it easier to get into difficulty.