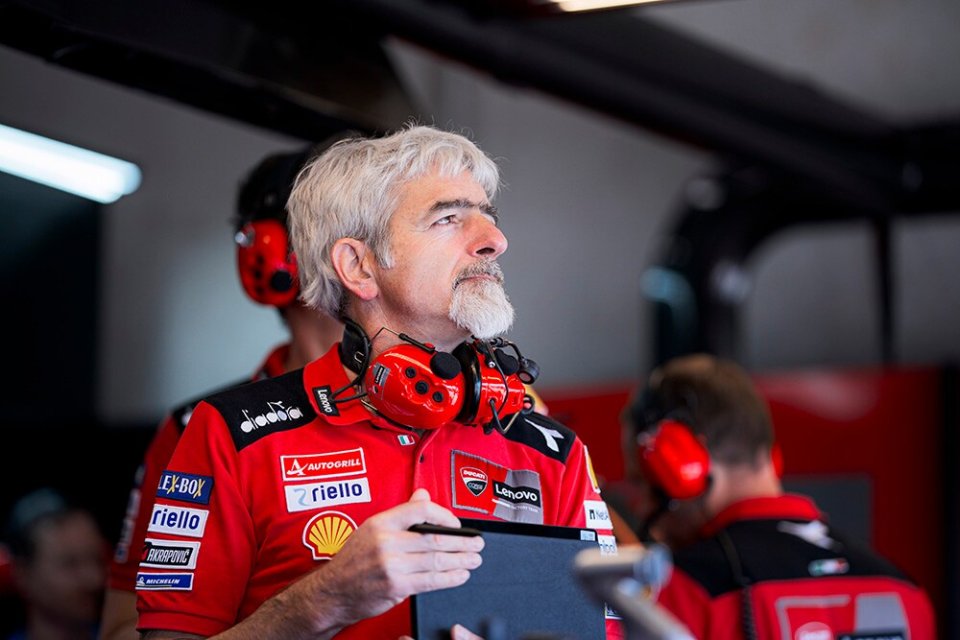 The MotoGP of the future will have to adapt in some way to the global trend aimed at significantly reducing CO2 emissions into the atmosphere, following the path already traced by Formula 1 and Endurance. For now, there are no certain scenarios or regulatory revolutions on the horizon, yet the manufacturers are already starting to think about the issue and apparently Ducati and KTM are starting to express rather different points of view.

Gigi Dall'Igna was interviewed by our Speedweek colleagues on the subject, expressing the possibility that a hybrid propulsion system could be the key to drastically change the situation, but Stefen Pierer, CEO of KTM, was quick to respond by affirming a profoundly different vision. These are the words of Dall'Igna.

"We have to look for solutions to improve the efficiency of the engines. Efficiency is one of the key points for the future. So I think we need to do something different than just using the combustion engine. Of course you have to pay attention to the costs in MotoGP. But if you stipulate uniform components for a hybrid drive unit like the ECU, i.e. if the battery and the motor are identical for all manufacturers, the costs would not increase so much."

While declaring this possibility, Dall'Igna also admitted that at the moment he has not made any real studies on the subject.

"I haven't done any detailed studies on this yet. That's why I can't make any concrete statements about the weight, the costs and so on. In the end, this is a concept that could be reasonable if planned and done right. It depends on what exactly you want from such an efficient drive unit.”

A technology that for Dall'Igna could have a direct impact also on production bikes.

“But in the end this could be a technology that might also make sense for road machines. I think that's a smart idea for the future. That's my opinion, but maybe I'm wrong. You can't compare a motorcycle with a car. And so far the technology hasn't progressed sufficiently. So far there have been no sensible solutions. But that may change in the future. And we have to think about the future. We can't just focus on tomorrow."

Pierer responded to these words by firmly asserting a very different vision.

"This is total nonsense. It is completely off topic for a motorcycle. On the subject of greater efficiency, yes, we agree. Thanks to the lower fuel consumption, it will still be a special challenge for Ducati ... Also, we will use ' biofuel 'just like Formula 1, we are following that path. We will start in the World Championship, perhaps as early as 2024. In MotoGP, 100% biofuel will be used in 2027. If you talk to the executives of the Saudi Arabian fuel company Aramco, you will find out where the future is going. They are already accumulating solar capacity for the production of synthetic fuel and therefore use solar cells 365 days a year. "

Sebastian Risse, a KTM engineer who asks the same questions and has confidence in other paths, also supported Pierer.

"KTM has no interest in such hybrid units, because these systems are not used in series development and such concepts are very expensive. If you can achieve sustainability using 100% biofuels after 2026, why do you have to make things more complicated than necessary. Hybrid technology with all the components you need is not even 100% sustainable. In the end you always need some resources. "

Hybrid according to Risse risks compromising the DNA of the bike.

"I think it's too complicated. It also goes against the philosophy of a bike that should be simple and light. Because if the battery runs out, the bike will obviously perform completely differently. One of the reasons customers buy a bike is because you ride it in a certain way. It is mostly different with a car, because you want to use it mainly to get from A to B. It would therefore make more sense to have a small electric vehicle for short distances and a larger one with sustainable biofuel for longer journeys ".

There has also been no feasibility study at KTM at the moment.

"As for the additional costs, I can't give an off-the-cuff estimate because the concept is not interesting for us at KTM and we don't deal with it."