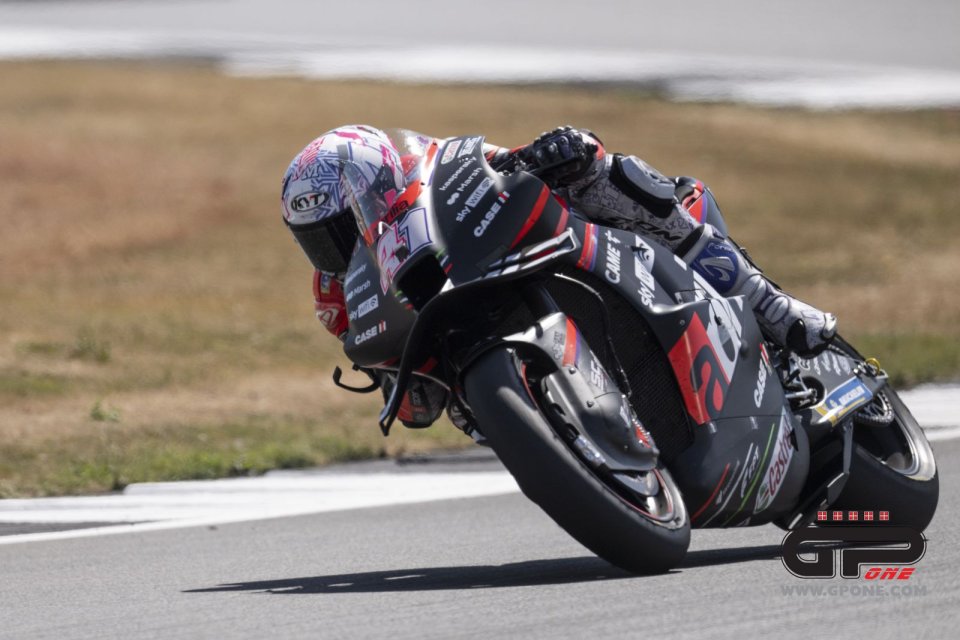 In the end Aleix Espargarò lost just one point to his rival, championship leader Fabio Quartararo. An excellent result taking into account the bad accident during Saturday's FP4 which forced him to start in not optimal physical shape.

“I felt good, sincerely. The pain was not an excuse – explained the Spaniard, adding – Obviously I was not really able to move freely on the bike and get the bike to turn. I felt quite sore all the race, all the body, but I didn’t have a lot of pain. Today’s race I could not understand at all. If I take the classification, I understand zero about the bikes. Both Ducatis have zero pace during all the weekend and they both win. Hats off to them. For us it was the opposite, but we didn't lose anything”.

Seeing what Vinales was able to do in the final laps, one would think that with a fit Aleix there would have been more of a fight up front.

"Yes Maverick was strong, and for the whole weekend we were fast, I was faster at times. Too bad for yesterday's crash that didn't help us at all ”.

In the end Espargarò lost only one point.

“The world championship is still open, I was lucky to have lost little. And it is very important that Bagnaia gets closer because he is not looking for the second position, but the title and this means that he will put pressure on Quartararo and this is an advantage for me ”.

Saturday's incident was a setback, especially in perspective.

“Unfortunately we cannot make these calculations, races are races, you can do whatever you want in practice but then it's the Grand Prix that counts. I don’t understand where Ducati found the pace. Bezzecchi was very strong, he finished 10th, Fabio was very strong and finished with me, the KTM of the leading group, Bastianini was out of top 15 on Friday. I really don’t understand what happened today, I had zero traction on the right side during the race. This is MotoGP, it’s nice and close.”

Nevertheless, you still tried to overtake Quartararo on the last lap.

“It was impossible my overtake on the last lap, I was very far from him but I had to try. I released the front brake and went, but unfortunately I knew it was just one point but it was not a matter of points, it was a matter of getting in front.”

“Well, everyone who passed me did it where I crashed during FP4, because at that point I lost speed. Now I have pain all over, neck, back. I will rest this week and then do a full scan to see if anything is broken, but 100% I will be in Austria. "

What are your expectations on that track?

"Aprilia will also be strong in Austria, as will Ducati. It will be difficult to beat them. The world championship is open, and it will be necessary to be mentally strong, and not go up and down. I will try again to get on the podium at the Red Bull Ring and I think that if race after race Ducati continues like this and I will continue with my pace and also Maverick will improve even more and there will be more fight up front, it will be better for me ”.

Pecco is getting closer...

“Today Pecco took a step forward but he still has a big disadvantage, 49 points, almost two races, but Ducati has a lot of bikes on the track and they can work well. Furthermore, now Bagnaia has two favourable tracks in front of him, the Red Bull Ring and Misano. The world championship is still fully open, and the last races will be decisive ”.

The official announcement came today. The rider from Ascoli: "I have no expectations other than to return to a serene and clear climate inside the...
15 hours 49 min ago

This is the first MotoGP pole for Honda since Pol Espargaro at the British GP last year (21 races), ending the longest sequence of successive premier...
20 hours 43 min ago