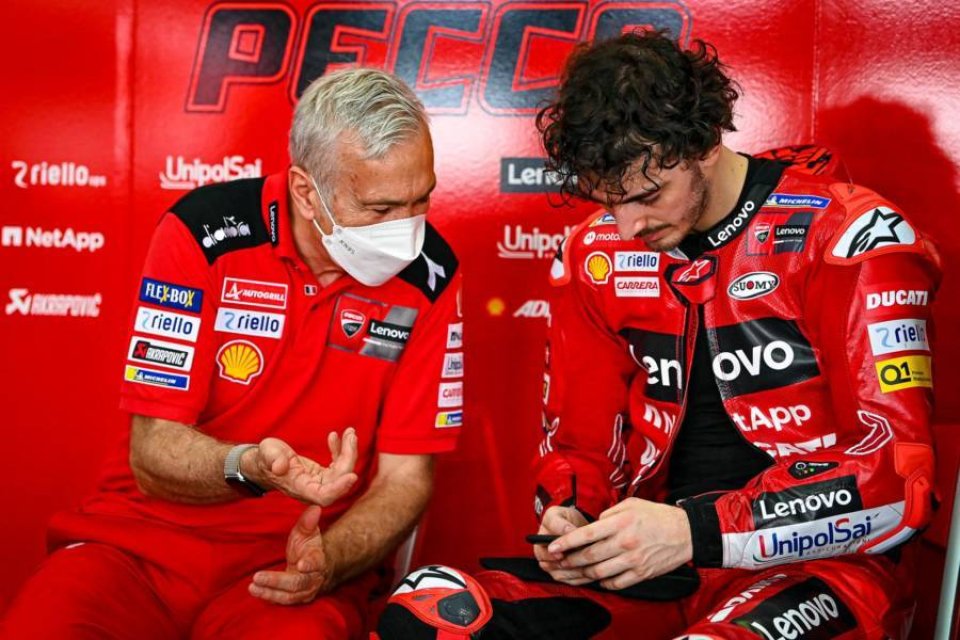 Bagnaia's victory, heart-pounding until the last of the twenty very tiring laps on the British circuit, was obviously reflected in the spirits and smiles of his team. First and foremost, it was the Ducati team manager, Davide Tardozzi, who wanted to spend words of thanks and happiness for a victory that over the weekend seemed anything but easy to come by.

Your impressions at the end of the race in the heat of the moment?

"I almost lost my voice by cheering - he confessed with a smile - both riders showed their qualities, but Pecco in particular rode a race like a true champion. It is an expression that is often used but today it was different, today I really feel I can use the term in its full meaning. He showed that he has truly matured as a rider, managing very well in particular the last laps in which he had to face a really fast and fierce Vinales. Bravi both Pecco and Jack, after practice and qualifying the expectations were not the best, then with this morning's warmup and the last meeting with the engineers and technicians I think they found the step that was missing to make the leap in quality, especially in terms of the lines on the circuit " .

Pecco revealed that this could be his best MotoGP win, but could it be said that this is perhaps the most important, especially at the moment in view of the current ranking?

"Reasonably, I was already fully convinced that Pecco could get close to the podium today, he's a racing animal and has the skills to do it, but he went further, his victory today really surprised me, both me and the whole Ducati team thank him for the wonderful victory he gave us today ".

He still surprises you as a rider.

"I'm surprised that he still manages to surprise me," he continued joking.

Irrespective of Pecco's victory, today all the other Ducatis also achieved excellent results, except unfortunately for Johann's crash. They took away valuable points from your rivals at an important moment of the season.

"I think Pecco's victory today was also a victory for the brand. Having so many Ducatis on the track was certainly an advantage, which allowed Bagnaia to recover valuable points over Fabio."

Now what can we expect for the next races? The Silverstone circuit was not a favourable race ground for you, yet ...

"Having recovered 17 points on Fabio is certainly an excellent result, but the gap is still big and there are still several races to go. Not to mention that we are still talking about a champion. I don't know what problem Fabio had on the track today to justify that drop. I thought he was the only rider to fit a medium at the rear in the first positions but I don't know if that was the main cause ".