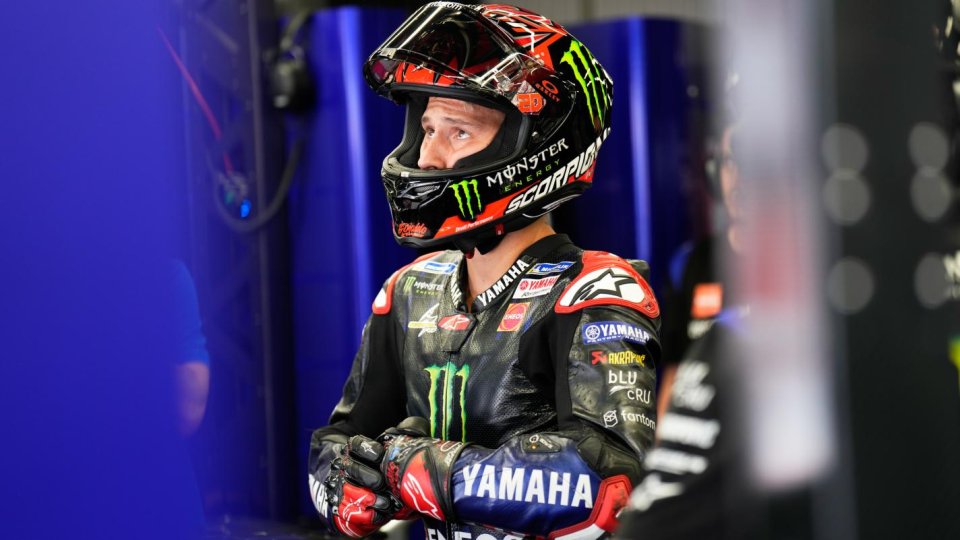 It was a disappointing Grand Prix at Silverstone for Fabio Quartararo. Irrespective of the penalty, the Frenchman vanished from the race due to the tyre, to the point of finishing in eighth position ahead of Aleix Espargarò's Aprilia. And Fabio was very disappointed, especially after the expectations of the day before, where the goal was to try to fight for the top positions.

“I am disappointed with the race – he said - because I thought the long lap would have penalised me much more, and finally it was not so bad. Just the rear tyre was so bad and behind the riders we cannot ride our bike. It’s just a nightmare. If it’s just one bike, it’s ok, but if there is more than one bike the rear tyre was so hot and it loses performances, then it goes down and then you are riding in a totally different way to the others. And for us to then overtake is a nightmare.”

El Diablo’s choice was the medium, while Bagnaia opted for the hard one.

In addition to the matter of the tyre, there were other aspects to overcome in the confrontation with Ducati and Aprilia.

“Top speed, acceleration and rear grip. But I prefer not to talk too much about this. It is important for us to stay focused, as there are some negative aspects that we cannot improve this season ”.

Fabio tries to dampen his disappointment, but the difficulties encountered were clear.

“We can be fast on all tracks, but the fact is that there is no tailor-made track for us. The next races will in fact take place on tracks with many accelerations and long straights. Then we will have Japan and Thailand, where we did not race last year, but the situation will be the same there too ”.

Meanwhile Ducati and Aprilia stood out on the Silverstone podium, while the Japanese manufacturers had to lick their wounds.

“I honestly don't know how the other teams work. The thing I can say is that they are working a lot in my garage and Yamaha has several Italian engineers inside. However, I don't know the method of our opponents ”.

“In the last two races I have lost a lot of points and Pecco is fighting for the title. He has a lot of experience, moreover Ducati has more bikes on the track than us and this involves a greater comparison of data. Maybe on Friday we are fast, but then during the weekend they emerge given the amount of data available. The chicane of the long lap penalty? In my opinion it is dangerous ”.

Quartararo from pursued to pursuer: the nightmare of 2020 is back

The usual suspects of the Bikers'Classics can rest assured, for them nothing will change, since the formula developed since 2021 is once again...
1 day 5 hours ago

Usually the Turk surprises us with his evolutions, but this time something did not go according to plan for the former world champion
1 day 5 hours ago

“Kazakhstan is absolutely absurd.” Ezpeleta’s response: “Without Sokol, we would have stopped for 5 weeks. I could live with 15 races a year, but my...
3 days 23 min ago