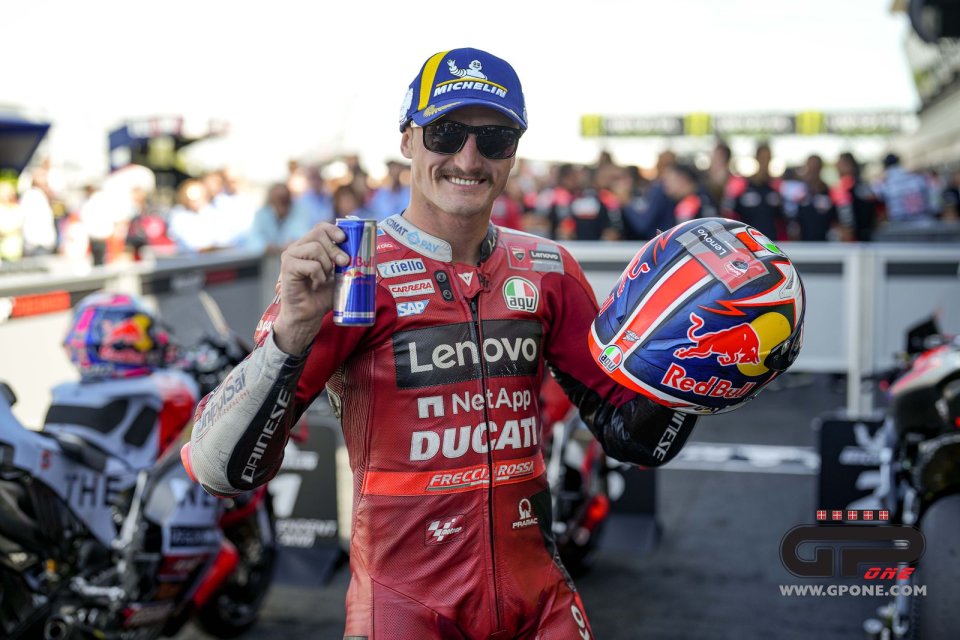 A picture perfect day for Ducati that was able to place both riders of the factory team on the Silverstone podium. A victory for Pecco, perhaps unexpected, but also a good third podium step for Jack Miller. The Australian rider, who started third, was able to withstand the assaults of several of his rivals, first chasing Fabio, then Alex Rins, and then giving way to his teammate and Maverick  Viñales at the end of the race.

"Yes, I fought with everyone," Jack said. "At first, I was with Zarco and Fabio, then  Fabio took off for the long lap, and I lost sight of him. Shortly after, Johann fell, and Alex Rins showed up in his place trying to distance himself. I tried to keep the pace high for a while so as not to lose sight of him, then I decided to be more conservative and see how the race would evolve, lap after lap. Finally, Pecco arrived, and together we started chasing Rins who then had a decline. In the last few laps, I really had to get the most out of the tires, trying to manage them in the best way possible, using the rear in the more fluid corners to get to the end of the race. I’m very pleased to be here again on the podium. I couldn’t have started the second part of the championship better."

Two Ducatis on the podium today. It’s difficult not to see at least one nowadays, and the next races should be favorable for you.
"We had a some bad luck last year in Austria, but it’s generally a good track for us. I personally tend to improve my performance in the second half of the championship and, this year, I already achieved excellent results in recent races. I believe we’ve taken an important step forward from the Barcelona tests, so I’m certainly looking forward to seeing what other results we’ll be able to achieve by the end of the season."

What makes the Silverstone circuit so special?
"It’s an old-school circuit, with a long lap and many different elements. Its strong point is its ability to offer different bikes with different strengths the chance to give it their all, and we’ve seen this in the race with different bikes fighting for the top  positions, and the line of riders that becomes longer and shorter depending on the segment covered."