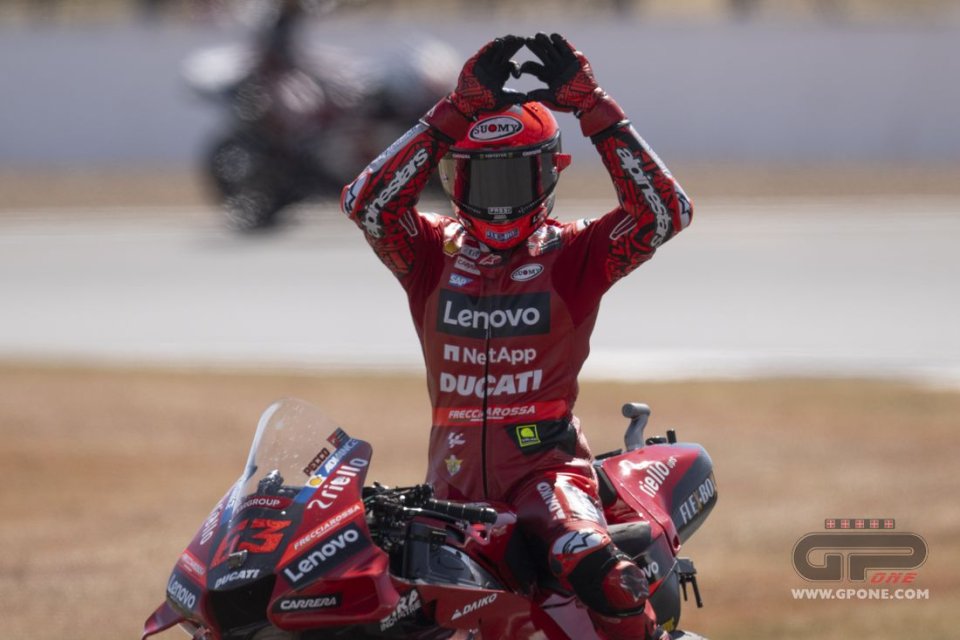 Pecco Bagnaia today was condemned to win, because he just had to capitalize on the physical problems of Aleix Espargarò and the penalty of Fabio Quarararo. The problem was that, until yesterday, the Ducati rider didn't seem to have the right cards up his sleeve. Even at the start of the race he seemed subdued, but then he pulled one of his best races out of the hat. "Like a champion" Davide Tardozzi said about it, one of those we were used to by Rossi or Stoner. So, when Pecco thanked them in parc fermé it was not merely by chance.

“This weekend I spoke a lot with Valentino. He told me a lot to understand better the situation, because I was a bit in trouble at the weekend – explained Bagnaia - It’s not easy from his point of view because he’s at home looking at the screen at the TV, but he helped me to understand the tyres, to understand the temperature with the tyres, he helped me a lot.  He gave me great support, even moral, and I broke his balls a lot in these days - he laughed - He is always very present and being able to take advantage of his experience helps ”.

“To Casey, I just asked if in the past he had done something different in this track that helped him to be more competitive.  And this morning he sent me a message and I just tried to do something in the way he had done in the past and was good, but maybe not for the tyre we have now.  At the end of the races the tire was finished, there I went back to riding with my usual style, braking hard ”.

You managed to get two historical rivals like Rossi and Stoner to collaborate ...

"The best thing is that, even if they were great opponents, there is a lot of respect between them. I thank them both, as well as my team for the great job ”.

Advice aside, it was you out there on the bike today.

“I'm very happy, it was one of my best victories. This morning, in the warmup, using the hard rear tire solved some problems and in the race I found something more ”.

You have made up 42 points on Quartararo in two races.

“That’s a lot, but I don't want to think about the championship, just to be competitive in Austria as well. Today was very important to take an advantage from the long-lap penalty of Fabio and that was the key, Fabio with this long-lap lost time because he started on the medium rear tyre and if he was in the front, in first position, I think he was opening a gap, because today was very competitive. But Zarco was closing his lines a lot and he lost a lot of positions. But then also Aleix yesterday had a big crash and so today I had a great day in terms of the championship.”

“Winning today was the most important thing because I was struggling and it's the first time this year that in a difficult situation I win. So I’m very happy about this. My objective is always to be competitive and to win races. I think in normal circumstances Fabio was always in front like me, to fight with me. “

How important is this victory?

"It is important, in this season the next race after winning I had always crashed, now I have managed to score a double and I am more relaxed".

“Last year I was fast too, but at the end of the year, when the championship was over, it's different now. This season I’ve crashed several times, perhaps because I didn't have the right mentality, the summer helped me understand where I was wrong and progress ".

Last year at this point of the season you still hadn't won, then you did it 4 times. You are now already at that number of wins.

"Let's hope the opposite doesn't happen and he won't win anymore (laughs). I don't mean that I am stronger, but I hope I have learned from my mistakes. As I said, this was a difficult weekend, I had to give my all and on other occasions, in similar situations, I crashed”.

“I happened to be close to him 2 years ago, in Misano, but I crashed. Maverick is tough, but he had to use the rear tire a lot to get back to me. When he passed me he went long and I crossed lines with him. At Jerez, against Quartararo, even if there was no overtaking, it was more difficult to win. In terms of emotions, however, this victory is better”.

Does the Aprilia frighten you?

"They have taken a big step forward, but also in Ducati they are working hard and we will improve further".

Having so many Ducatis on the track helped you today, they took points away from Quartararo.

"Yes, but it can be a double-edged sword because they could get in front of me. Certainly our bike is very fast, but what is sometimes not stressed enough is that all the riders who ride with Ducati are also very strong ”.

The next race is in Austria, a Ducati track.

"Last year Honda and Yamaha were also fast, now Aprilia will be there too. Furthermore, the Ducati has changed, the bike is more rideable, I think we will be competitive ”.

Will you celebrate tonight?

"Sure, but I will take a taxi to go home!" he concluded with a smile, making light of his summer misfortune.

Fabio Quartararo jokes: Maybe I should ask Stoner for advice too"

Gabarrini: "Bagnaia’s synergy is like Stoner’s with the team"