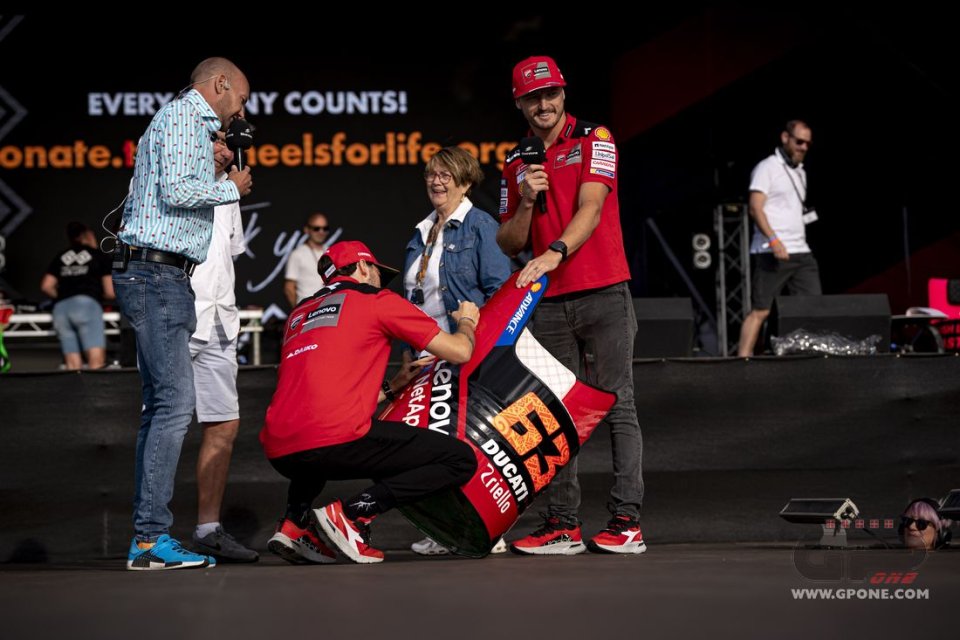 The Day of Champions was another huge success, raising an impressive sum of money for Two Wheels for Life, the official charity of MotoGP. The event always takes place on the Thursday preceding track action, with the main auction joined by a host of other actions on the day and extending across the weekend.

This year, the main Day of Champions auction raised an incredible £77,550 (equivalent to about 92,000 euro) in just five hours, and it's expected there will be a significant extra amount of funds raised from another auction on Saturday, along with other activities.

Riders from MotoGP, Moto2 and Moto3 were involved in the auction, with a huge range of unique memorabilia up for sale from a host of past and present stars of the sport – with many riders taking to the Main Stage to take part in the sale of their own donations to the auction.

The amount raised is a truly fantastic result for Two Wheels for Life which helps fund vital medical work in some of the poorest and most remote areas of Lesotho, Malawi, Nigeria and The Gambia, via local-led and managed programmes on the ground.

The highlights of the live auction included the sale of the chequered flag used to end the final race of nine-time world champion Valentino Rossi's career at Valencia in 2021. Signed by Rossi and with a certificate of authenticity, the flag sold for a stunning £4500 (about 5,300 euro). Other key items sold included a signed Kenny Roberts Snr crash helmet worn at the recent Goodwood Festival of Speed and two chances to be on the MotoGP grid this weekend – each of which raised £3800 each.