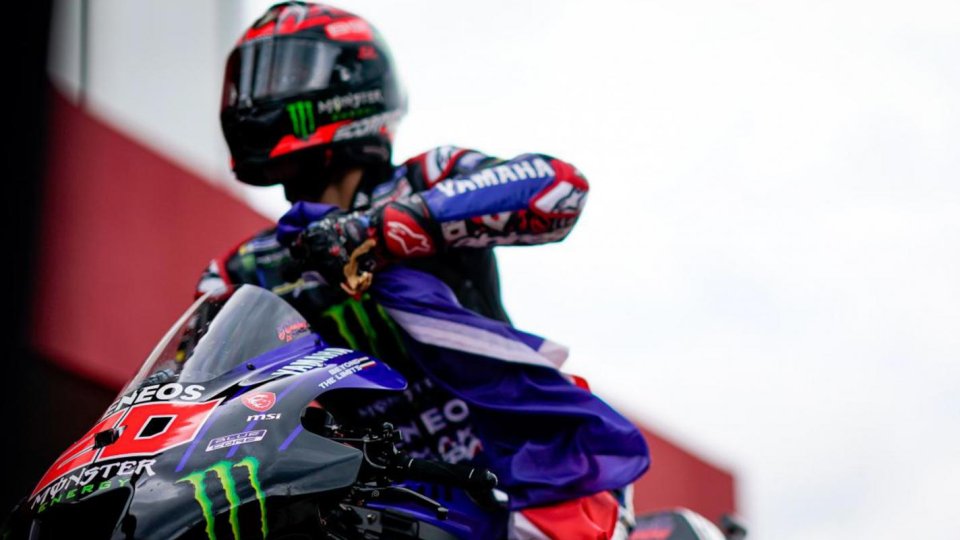 Fabio Quartararo went on the attack in Silverstone FP2, setting the benchmark in the afternoon session on his M1. The reigning world champion appears to be oozing confidence, despite this cursed long lap that he will have to serve following the events in Assen.

This is precisely the subject we talked about on Friday.

“It’s long, but at the end it’s not so bad, it’s not so… I would not say long,” admitted the Yamaha rider. “Of course, you lose time because you gain some metres, but you don’t need to be so precise like in Barcelona where the long lap is so long and you need to be precise. With the team we have had a good look at this, even if I don't know how much time we are losing”.

And to think that Fabio had already served a Long Lap penalty at Brno in the past.

“This time the situation is completely different. At Brno I did it 5-6 laps from the end, while here it is at the beginning and it is more dangerous, because you risk finding yourself in a scrap with the other riders who are coming. In the end, however, I don't want to go crazy for this penalty”.

Meanwhile, El Diablo has already begun to sharpen his weapons.

"Every time I had a yellow flag I tried it. I think I've done it like 5-6 times today. Tomorrow I will speak with the team, in order to adopt the best strategy. I think it’s not necessary to risk a crash to gain one tenth, two tenth. To lose two tenths more is no problem.”

Fabio certainly did not miss out on the new developments brought by Ducati.

“Yes, I've seen them. It looks like Fast and Furious”.

Then it was time for a quick summary of his day.

“It was tough because the first laps in FP1 I was a little bit lost. Not on power or handling, but on braking. At Turn 8 I was braking, I had to release and I didn’t remember how much those bikes braked and I could not ride after Assen for the shoulder injury that I had, and was strange.”

To definitively close the question of the long lap, there was also a background anecdote.

“I did it already yesterday with the bicycle and I saw that it was long. But It’s not so bad. I just still think I don’t deserve this penalty, but if it helps for the future and the stewards to find a balance with these penalties, I’m happy to do it.”