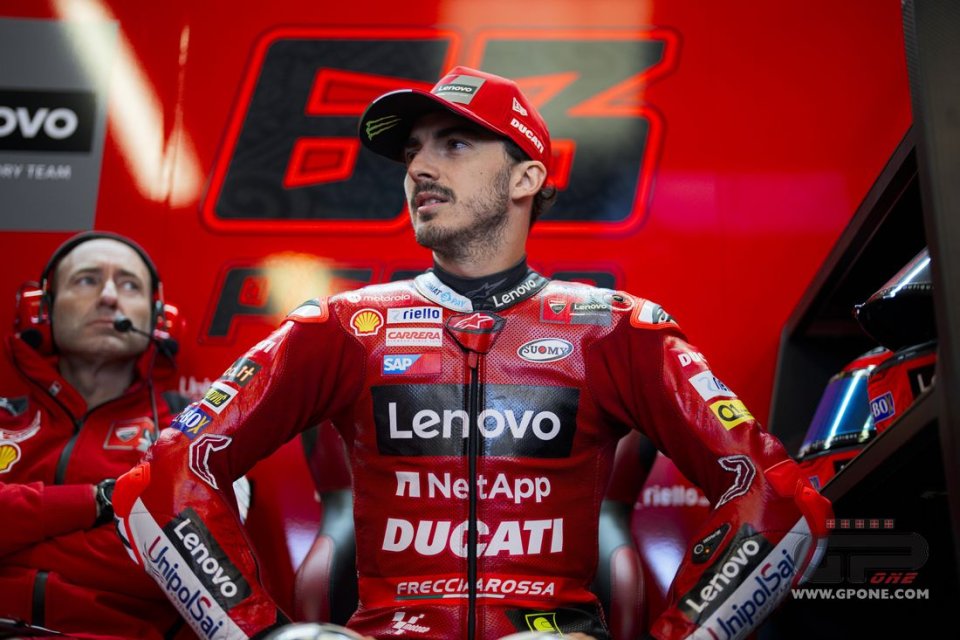 A crash in the morning and 11th place in the afternoon, said Bagnaia's Friday at Silverstone did not seem to have gone in the best way. Yet Pecco's mood is anything but bleak, indeed the Ducati rider is satisfied with his start on a track that has given Desmosedici many problems in the past.

"It was a good day, certainly in the morning but also in the afternoon because that session allowed me to realise that I am not happy with the medium tyre on the front - he said - Unfortunately in FP1, when I crashed, I had a soft tyre in front which in the accident was cut and we could no longer use it for the flying lap. In any case, we started off on the right foot compared to last year and we are happy. I'm honest, there is still a lot of work to be done and I'm not 100% satisfied, but I knew this would not be an easy track for us and we are already at a good point compared to what I expected. "

The crash did not worry him, because he knows exactly what happened ("I sized up the curve badly, I touched the white line and I put the bike on the ground. It was my mistake," he explained) and he prefers to think about making the progress he is still missing.

"This morning, with the soft tyre on the front and a medium used at the rear, on the second exit I lapped in 1m59.9s. Tomorrow I will be able to improve, although I know that we will have to take a bigger step forward compared to those who are already in front. I am missing 4 tenths from the first on the flying lap, I'm not too far away, and I'm happy on the pace” he summed up the situation.

Then he moved on to his opponents. Which are the benchmark bikes at Silverstone?

“Aprilia together with Yamaha – was the answer - Fabio has always been very fast on this track and Aleix made his first podium here last year. Rins is very strong and so will Mir be. This is a particular track; it is difficult to make big gaps but we are all already lapping stronger than a year ago. In my opinion there could be several riders in front”.

Today, the wings on the tail of the Ducati made their debut on the bikes of Bastianini and Martin.

“I'm curious to try them - commented Bagnaia - Enea was in clear difficulty before mounting them and then he went fast, maybe they give a good advantage. The plan was to use them this morning, but I crashed and wasn’t able to, if we have time in FP3 I would like to fit them”.

The third brand of Pierer Mobility AG together with Husqvarna and KTM might arrive in the French satellite team that will compete with Pol Espargarò...
4 days 1 min ago