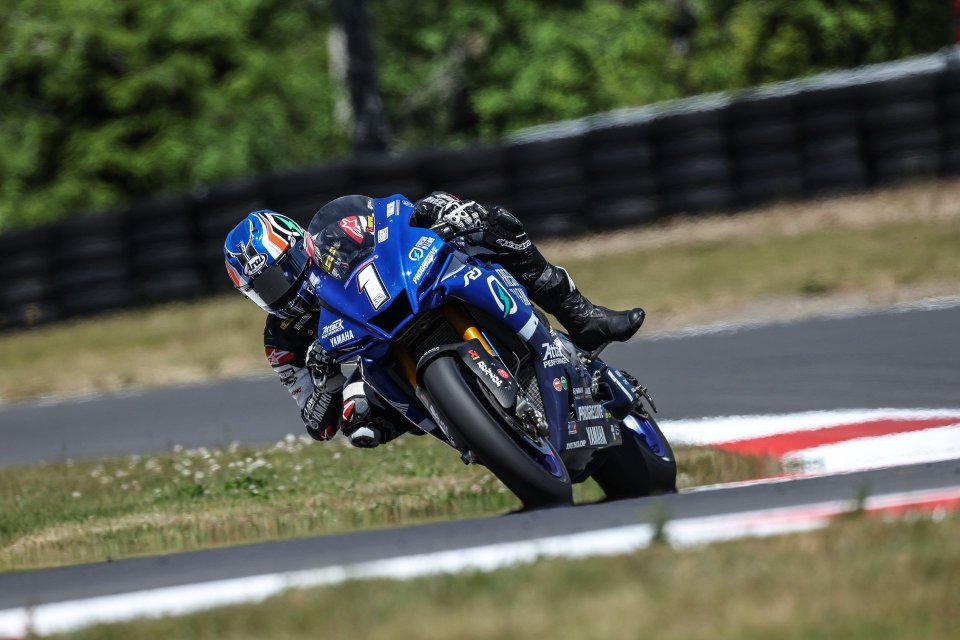 The Portimao round of the SBK will be the last round of the production-based series in Europe before it says goodbye to the Old Continent for the overseas triple-header at the end of the year. At the Portuguese round there will be something new at Yamaha.

Jake Gagne will race in the next Superbike round at Portimao. The current MotoAmerica champion and main challenger to Danilo Petrucci raced in the world championship for a few rounds in 2017 and in the 2018 season and is looking forward to returning to the World SBK paddock as a wildcard with the team with which he has achieved many successes in the premier class of MotoAmerica.

You never know, maybe the American will find his direct MotoAmerica rival, Danilo Petrucci, on the track. On the eve of the Misano SBK round, Gigi Dall’Igna told us that in Borgo Panigale they were evaluating this possibility.

Since his first Superbike victory in the first round of the championship last year, the Colorado rider has racked up 25 career wins in the class. He took the crown with one weekend to spare and broke many records, including an impressive 16-race winning streak. Gagne took home another win in the last race of the season, scoring 17 wins out of 20 attempts. So far, in 2022, the champion has achieved eight wins and, despite the unfortunate second race of the weekend at the Brainerd International Raceway, he is still just 13 points behind current leader, Danilo Petrucci.

“I’m really excited for the opportunity to line up on the World Superbike grid – declared Gagne - Portimao is a really cool track; it’s awesome to be going back, and I look forward to the challenge. I couldn’t ask for a better team and motorcycle, so we’ll go over and do the best we can and enjoy the process!”

Attack Performance owner and team manager Richard Stanboli is looking forward to the technical challenge and experience of learning to race in a world championship. His team has had several wildcards in both WorldSBK and MotoGP, scoring points at the Indianapolis Grand Prix in 2012 with Steve Rapp. On September 23, after the last chequered flag of the 2022 MotoAmerica Superbike season at Barber Motorsports Park, the team will move to the world championship and will ship its bikes to Portugal for a wild card debut  overseas.

“Jake and the team are very excited to be invited to race in WorldSBK at Portimao. Our plan is to wrap up the MotoAmerica Superbike championship at Barber and then ship our bikes to Portugal. For sure it will be challenging, but when we have done a wild card entry in the past, whether it was World Superbike or MotoGP, we learned a lot and improved as a team. Fortunately, Jake has World Superbike experience at Portimao, and we will receive some technical assistance from our partners at Yamaha Europe. I would also like to thank Pirelli for the assistance and technical support they will bring to this effort. Our goal is to put on a good show and make our fans proud.

Yamaha Motor Corporation, U.S.A., is also excited to see the team make the wild card appearance after the conclusion of the MotoAmerica Superbike season.

“When Richard asked us if we would support Jake going over to do the wild card ride, we gave a big yes and let our Yamaha Motor Europe friends know what was happening,” said Tom Halverson, Yamaha Racing Assistant Department Manager for YMUS. “They were very supportive and excited to have Jake race in Portimao as well and offered as much assistance as needed.”

Andrea Dosoli, Yamaha Motor Europe Road Racing Manager, is delighted to be welcoming Gagne and the Attack Performance team to the WorldSBK paddock: “We are looking forward to welcoming Jake back to the World Superbike paddock. After an amazing season in 2021, he’s once again fighting for the title this year, confirming his high level of performance. We are always looking to give riders who have been successful in their national series the opportunity to race on the world stage. After we had the winner of the British Superbike championship, Tarran Mackenzie, wildcard at Donington Park, we’re glad that the reigning MotoAmerica Superbike champion will be able to join us at Portimao. We know that it won’t be an easy challenge, but we are ready to support him during the event and wish him and the Attack Performance team all the best for the weekend.”