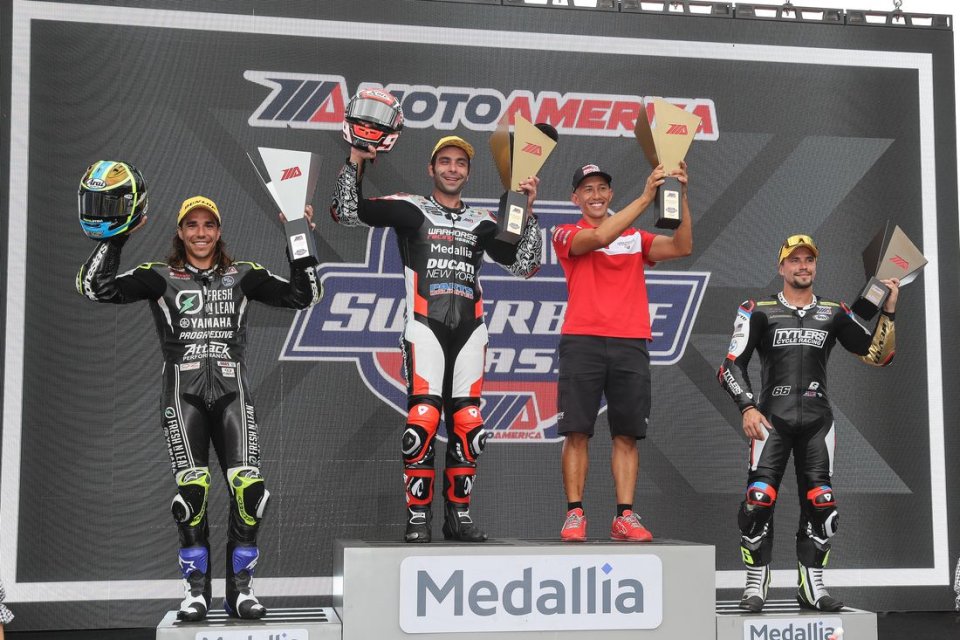 After a gap of 10 races, Danilo Petrucci is back on the highest step of the podium in MotoAmerica. He did it yesterday at the Brainerd circuit in Minnesota, on a bad day for his rival. Jake Gagne, in fact, crashed when he was in the lead and the Ducati rider thus conquered his fourth success in the American SBK series and managed to stretch a lead in the standings. Now 253 points, 13 more than the Yamaha rider.

“Yesterday was a tough one – admitted Petrux – I tried the first lap to stay as close as I can to Jake, but I almost crashed, like in the practice. I was able to hold the bike but with my feet. I couldn’t turn here, and I ran wide in the corner later, so also Cam Petersen came past me. Then I was able to pass him again.”

What happened at that point?

“I tried to push, but same mistake as yesterday. Hit the neutral on the penultimate corner and then Jake made a gap. Then I start to push. I said, ‘I have nothing to lose. I’m behind him in the championship, behind him in this race. So, I need to try.’ The moment I said, ‘okay, he went away again.’ Unfortunately, he crashed. I’m sorry for him. I hope he is okay. That’s racing.”

You now have a 13-point lead over Gagne.

“The championship is definitely still open. I must be true. Jake in this moment is a bit faster than us, but on the pace, I think he was a bit of tenths faster. Then we made a massive change on the bike from yesterday, and we didn’t have the chance to try this morning. As I told you, I have nothing to lose at this point. I never look at the points. I know Jake is faster, but I need to stay in front of him because we cannot make any calculation with him. He’s always first, and you need to beat him. Congrats to these guys and thanks to my team.”

There are still three more races on the schedule, the next one will be in Pittsburgh from 19th to 21st August.

HIGHLIGHT Petrucci: "Gagne was faster than I am, he deserves the...