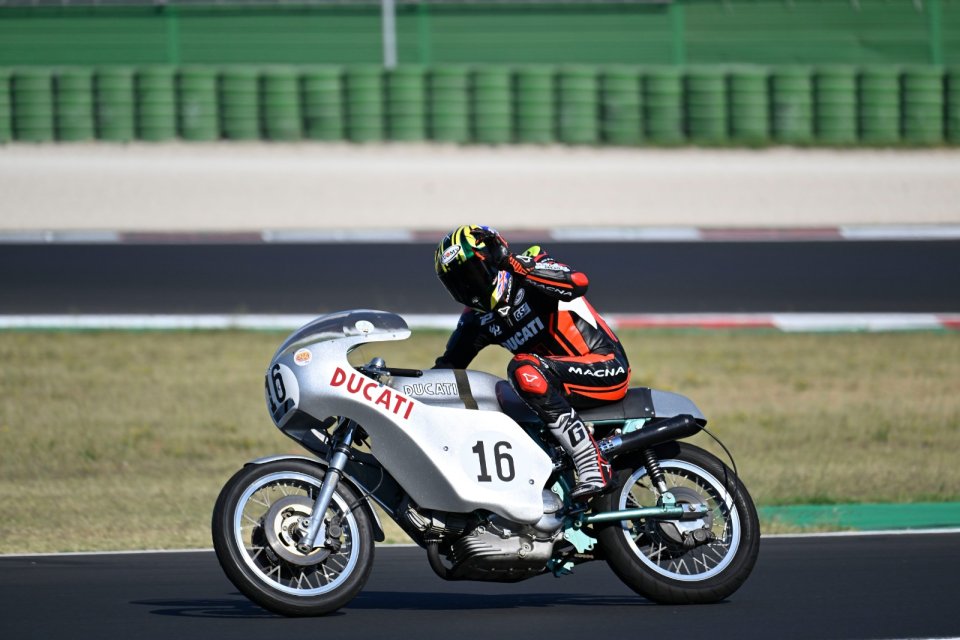 Troy Bayliss had the honour of ... doing a lap of honour at the WDW with the most legendary of Borgo Panigale's bikes: The Ducati 750 Imola Desmo with which Paul Smart won the Imola 200 Miles race in 1972.

It is the Ducati website itself that recalls the immortal history of this bike:

Pages and pages were written about the incredible final lap, where Smart and Spaggiari went side by side almost across the finish line; little was said, though, about how this race changed the course of Ducati’s history. The victory at Imola marked the future approach of Ducati to racing, which focused almost exclusively on vehicles derived from road production series. A step back is in order before mentioning Smart, Imola and the legendary “number 16”.

In 1972 Checco Costa brought to Italy the 200-mile format and Ducati had prepared eight bikes for Paul Smart, Bruno Spaggiari, Ermanno Giuliano and Alan Duscombe. The bikes mounted standard engines and frames, though they were prepared, as always, in a very short time. Most of the work, anyway, would still be almost invisible today, since it mostly concerned little details: whenever possible, every part of the bike was accurately reduced and made lighter. In addition, new Dell’Orto 40 mm carburettors with recovery pump were fitted at the last minute, providing the perfect supply to the large 80 hp at 8,500 rpm twin-cylinder engines.

At the last lap Bruno Spaggiari was in the lead but he ran out of fuel, paving the way to Paul Smart, who happened to have his birthday right on that 23 April. The race ended with Smart and Spaggiari in 1st and 2nd place, the true winners of that eventful day.

From this bike then derived the SS750 series which differed, over the years, with a new frame, narrower in the seat area and a different fork, no longer with advanced pivot.

With this bike Franco Uncini stood out, in the then production-based championship, in the same team managed by Bruno Spaggiari where 'Pollicino' Sabattini raced. Riders of the calibre of Carlo Perugini and Adelio Faccioli also raced with the 750 SS, both of whom then moved on to the world championship in the 500 class.

The 750 SS weighed 163 kg and produced about 85 hp at 9,000. It had a two-valve head, Dell'Orto 40 carburettors and disc brakes with Lockheed calipers (the first Scarabs).