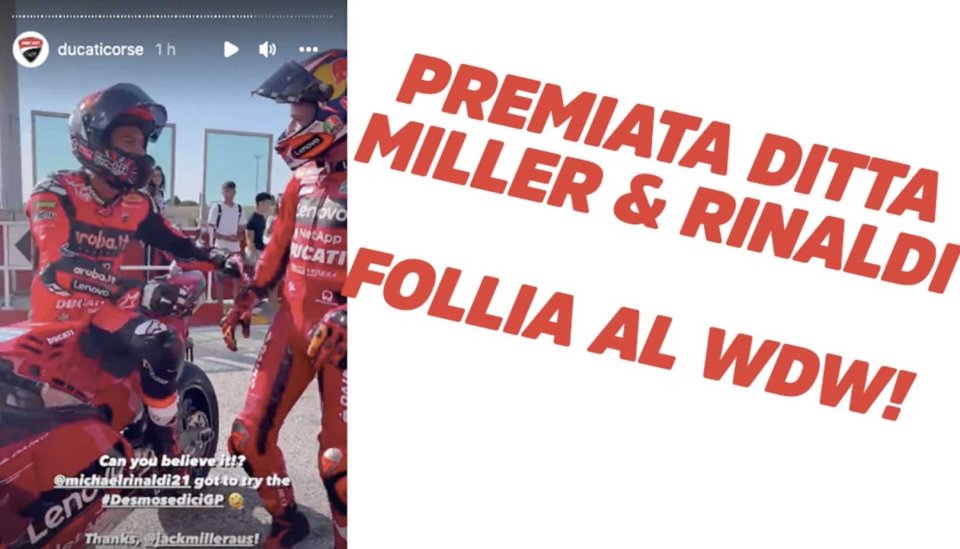 Jack Miller and Michael Rinaldi were the stars of an epic moment in Misano on the first day of the WDW. During one of the demonstration rides, Rinaldi approached Jack while he was greeting the  spectators and asked him to swap bikes. Between one madman and the next, Jack was the perfect pick! The two riders returned to the pits on each other's bike, as Gigi Dall'Igna, Davide Tardozzi, and Paolo Ciabatti watched them, astonished and amused.

Rinaldi commented on the episode during the press conference.

"This is the WDW! We’re Ducati riders. I had the chance and jumped at it! I approached Jack, who is fortunately crazy enough to have accepted. It wasn’t a very clever move, since I haven't signed a contract yet, but I had incredible feelings and, fortunately, I'm not the only crazy one here, because Jack backed me up! The MotoGP is very powerful, but it was just for fun and it was fantastic."

The look on Domenicali’s face when Rinaldi spoke tell us that he's forgiven him for a stunt that, all in all, is legitimate to expect from guys who live for motorcycles.