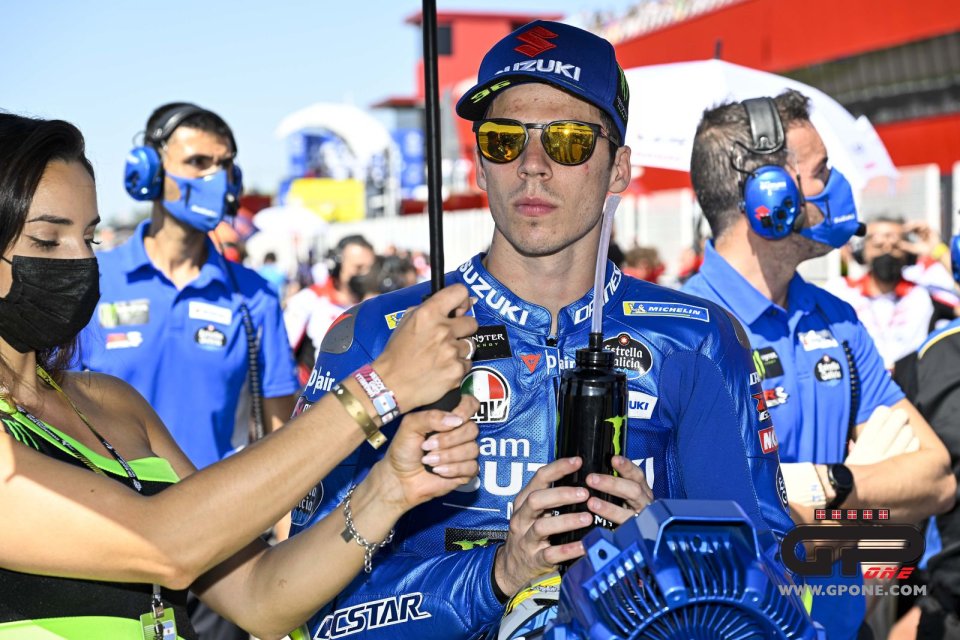 The announcement of the signing of the deal between Alex Rins and LCR, Lucio Cecchinello’s Honda team, confirmed that HRC has made the best possible decision by hiring the Suzuki duo, left without a ride after the retirement of the Hamamatsu manufacturer.

However, the deal is yet to be made formal, and so is the signature for Joan Mir, now clearly indicated as Marc Marquez's future teammate and this gives rise to speculation, much of which is related to his hiring.

The Majorcan, in fact, is a world champion and his manager, Francisco Sanchez, is expecting an adequate salary from Honda. Knowing very well, as he is also the manager of Remy Gardner, that outside of the top teams things are not exactly covered with gold. Far from it.

It is not an easy situation, the one that Sanchez has to face for his protégé. Suzuki’s farewell has in fact exacerbated a situation that had already emerged previously, namely the sharp decline in MotoGP salaries. Obviously it’s also a consequence of the twofold year of the pandemic and, currently, also of the geopolitical situation of Europe which has led to a drop in investments, but also of real production difficulties due to the lack of fundamental components.

But why all this delay?

“Certain questions you should ask Alberto Puig - Sanchez said some time ago - I don't know what the reason is for postponing this decision for so long. I think Acosta is not the cause because I think he has to stay another year in Moto2, I don't think he's ready for the jump into MotoGP. He is a great rider and will have a good future ahead of him, but he still needs experience, you cannot put the weight of Honda on the shoulders of a very young guy and he is not stupid ”.

The fact is that Mir has not signed yet.

“Of course Joan's economic conditions are not those of a rookie, he's a world champion - Sánchez was clear about this - For me Honda is the number 1 manufacturer in the world, but it can always happen that you find yourself in a difficult moment. Suzuki is Atletico Madrid, Honda is Barcelona or Real Madrid, they have to win every year, finishing second already sucks. This is why I think they have doubts and that it is not just one or two people who make the decision, but a group that is supervising everything ”.

Two things are certain: Mir is not afraid to take on Marquez and has no other alternatives.

“Joan is not afraid of anything. He knows that Marc has ridden with this bike all his life, but he also knows that he will either sign for HRC or stay at home. There is no plan B,” the manager confessed.

This last sentence sounds a bit like a bluff at a poker table: Joan knows that with this sort of atmosphere a sabbatical year is out of the question so, probably, the deal will be made or even has already been done and they are thinking about the details. After all, it is not that Honda has many other alternatives and the consideration that Marquez might not return on the top of his form must surely have been made.

Over the airwaves of Radio Box it is said that the announcement of the signing could come even before the Silverstone GP, on 7 August and this would be desirable because Honda also needs to reassure, if not its fans its sponsors, starting from the historic Repsol which, moreover, must face the reality of a future that politics would like to be without oil. There is little to be happy about.

At the same time, however, Joan Mir is not exactly in the best of condition to push his luck, and not just because Suzuki has left him without a ride. Joan, in fact, this year has as his best results three fourth places in Argentina, America and Barcelona which put him in 8th place in the world championship behind Miller. His teammate, Alex Rins, already now officially with LCR, is just behind him two points adrift, but he can boast two podiums: third place in Rio Hondo and second in Austin.

It's true: Mir has a world title on his side, but in sport evaluation is often more correlated to the current state of form and from this point of view the ex-Suzuki pairing are not too different from each other.

Sanchez is probably right: this decision is the result more than the desire of one individual, in this case Alberto Puig, of a collective decision that will take place in the upper floors of Honda. Honda, which also has to face an unfavourable technical situation that will force it to make a major financial investment.

All this while for months there has also been talk of a managerial reshuffle because there is no doubt that many of the decisions made have not brought the desired results.