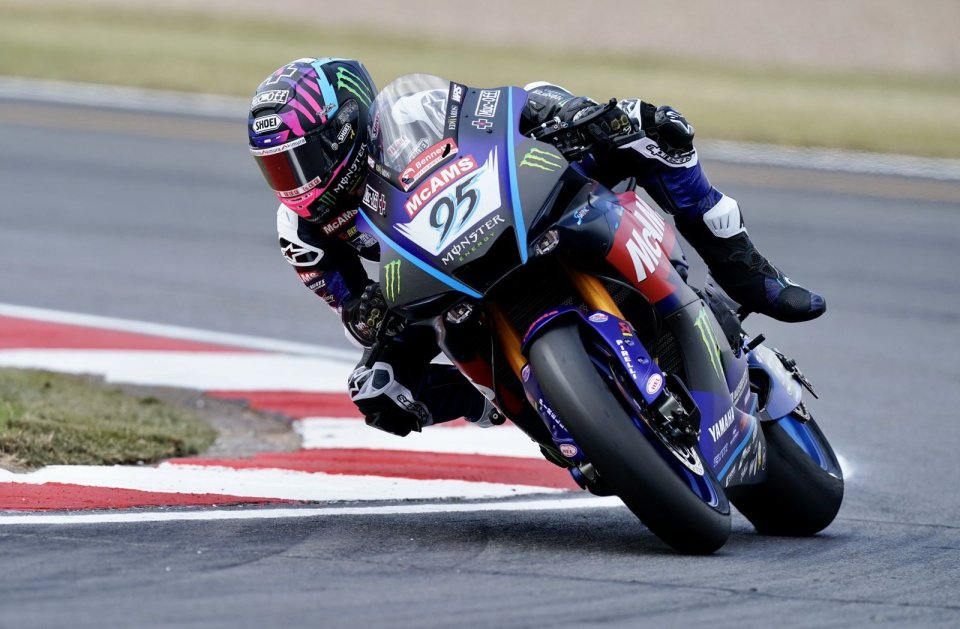 The glorious times when British wildcards created havoc in home Superbike World Championship races will probably never return … at least for now, and the reason is very simple. In the past decade, between the BSB and the WSBK, technical regulations are no longer consistent. If the bike frame doesn’t differ from world championship specifications, the substantial change involves the electronics. Since 2012, all the bikes at the start of the top class of the land of Albione race with the same MoTec control unit, without aids such as traction controls, anti-wheelies, and launch controls.

The weekend at Donington Park brought back local wild cards, with Peter Hickman and Tarran Mackenzie. The 2021 Champion of the category scored 3 points in just as many races, but to define the British Superbike a low level championship, however, is something else. Objectively, it's unthinkable to expect more from him. Besides a first contact with the McAMS Yamaha R1, readapted to WSBK specifications, he also had to deal with his poor physical condition (2 fractured ankles in 3 months), as he told us in our exclusive interview last week. So Mackenzie wasn’t disappointing. In fact, his goal was to gain experience before the next wild card.

“I tried to adapt as quickly as possible. We had to roll up our sleeves because my technicians haven’t worked with Magneti Marelli in at least a couple of years, so especially Friday wasn’t  easy. Moreover, I’m not in my best physical condition because of my recent injuries,” Mackenzie admitted. “I had done only six races (ed. 2 rounds) in the BSB. We improved session after session, winning points. I feel bad about the slip up in the Superpole Race where I involved Vierge. Now we’re looking  at the next Brands Hatch round to then return to the world championship in Most the following week."

What was that significant step compared to the BSB?

"It's not so much the tires as the electronics. By regulation, in the BSB, we use the single MoTec control unit without aids, such as traction control, anti-wheelie, and launch control. However, Yamaha helped us during the weekend, especially GRT, as well as Niccolò Canepa. Receiving their support was really great. It’s important to be gentle on the throttle here. On the contrary, you’d end up on the ground in the BSB."

When will we see you again in the WSBK?

"We have a busy schedule with the team. For now, we’re looking first at the next round of the BSB at Brands Hatch on July 23rd and 24th, and then we return to the World Championship the week after Most. The second injury, in order of time, clearly changed our plans because we had to make the first wild card in Assen. We’re going to try again in Portimao at the beginning of October."

Are you ready for the big change?

"Absolutely. I wanted to do it in view of this season but, unfortunately, that  wasn’t possible. It would be really advantageous for me to be able to work starting from the winter months with the world championship bike, so as to understand how it behaves, instead of limiting myself to the minutes of free practice of a single race weekend. At the moment, I got the monkey off back, since things just never fell into place for me in the previous three years to debut in the WSBK," he said jokingly. "I’m convinced that I could weigh in. I like the atmosphere, and I would be excited if it became my new home in the future."

Were you impressed by Razgatlioglu?

"Toprak's talent amazes everyone. His style is so pleasantly senseless. The thing that struck me the most is the consistency of his race-pace. He pushes from start to finish, and it's no coincidence he got a fantastic triple,"he concluded.