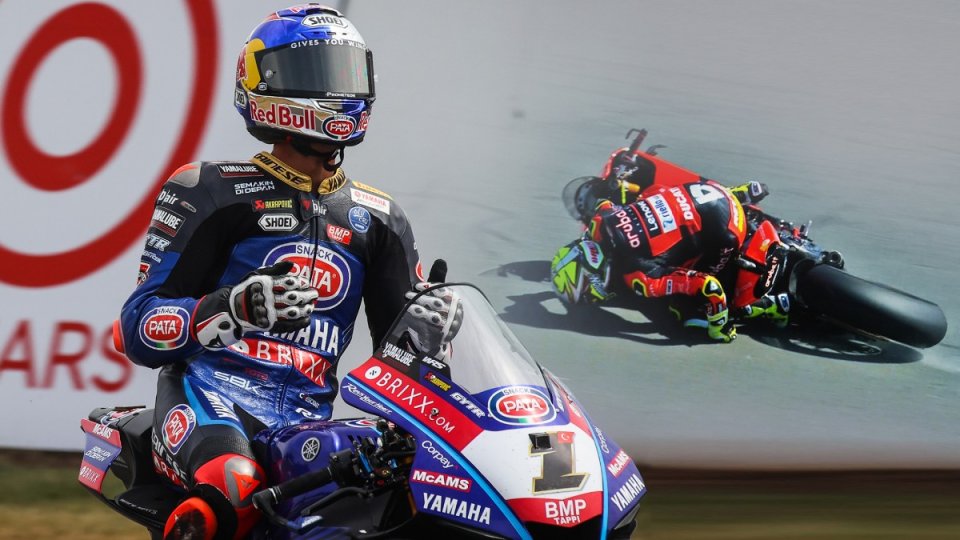 Superbike was back in action after a month of fasting, giving us back that Toprak Razgatlioglu we all knew last season. The Turk was simply irrepressible, hogging all the limelight, and turning off the lights of Johnny Rea in the County of Leicestershire.

For the Northern Irishman, this was his home race, or the right opportunity to be grasped to return to the top step. Too bad that against the world champion there was nothing doing, only avoiding ending up on the ground. On the other hand, there are those riders who ended up on the ground once, but then managed to get up again, proving that they had learned their lesson. This was the case of Alvaro Bautista and Ducati, who passed the most complicated test of the season by containing the damage.

THE GOOD - Toprak is back! One swallow does not make a summer as he himself admitted, but this weekend the Turk and his Yamaha seemed to be a unique thing as they got us used to seeing last season. Dominator in Race 1 and in the Superpole Race, fighting the way he likes in the race on Sunday afternoon, then getting the better of the enemy in green under his own supremacy. It was difficult to imagine anything better than for the world champion. Confirmation is now expected in Most.

THE BAD - It seemed to be the right race to return to victory, but Johnny Rea had to console himself with a double second and a third place in his home round. In the County of Leicestershire, the local idol found himself fighting with his Kawasaki. First set-up problems, then overheating of the brakes that thwarted his run-up to the top.

THE UGLY - In Yamaha on one side of the garage they are smiling, on the other they are aiming to fill the gap. Donington was certainly not his track and Andrea Locatelli found himself playing catch-up all weekend. After almost 30 seconds picked up on Saturday against his teammate, on Sunday he managed to partially leave behind the dross of the day before. His expectations, however, were quite different. Now he has to turn the page and start again!

THE CONFIRMATION - Simple and obvious: all that remains to do is to applaud Dominique Aegerter, winner of a ninth consecutive race, so as to equal the previous record of Andrea Locatelli. Someone like him cannot fail to deserve an R1 for 2023.

THE DISAPPOINTMENT - A year ago these days he finished in second position at Donington, now he seems to have lost his way. Actually, we have no idea what is happening to Garrett Gerloff, a distant relative of that rider we all got to know at the beginning of last season. This Yamaha no longer seems to be his bike ...

THE ERROR - With a hypothetical 40-point advantage over Rea, he found himself with 17. Saturday's crash weighed heavily on Alvaro Bautista, but what matters is that he learnt his lesson and got up quickly. This Alvaro has shown that he knows how to do it and Sunday's performance was his answer to all the doubts.

THE SURPRISE - Raise your hand anyone who thought we would see Redding in the top five. Probably no one! Instead Scott fully deserves the surprise mention of the weekend, winning the biggest challenge with himself and the BMW. If the first races proved to be a bit of a suffering, Donington gave us a Scott fighting with the best, capable of expressing the potential we all know. Now all that remains is to confirm this sort of form in less than two weeks’ time at Most. Raffaele De Rosa also deserves a mention, on his first podium of the season aboard the Ducati V2 of Orelac.

THE PASS - Between Toprak, Rea and Aegerter we are spoiled for choice. We therefore leave the last word to you!

THE CURIOSITY - Kawasaki did not win at Donington, but at least it was comforted by the fact that it notched up the milestone of 500 podiums in Superbike. Instead, Ducati will have to wait for Most to reach 1000.

I TOLD YOU SO - "Who’s going to win? Simple, Rea". In the press room, on Friday evening, all the reporters agreed in indicating Johnny as the favourite for the weekend in Donington. Apparently Toprak proved everyone wrong!