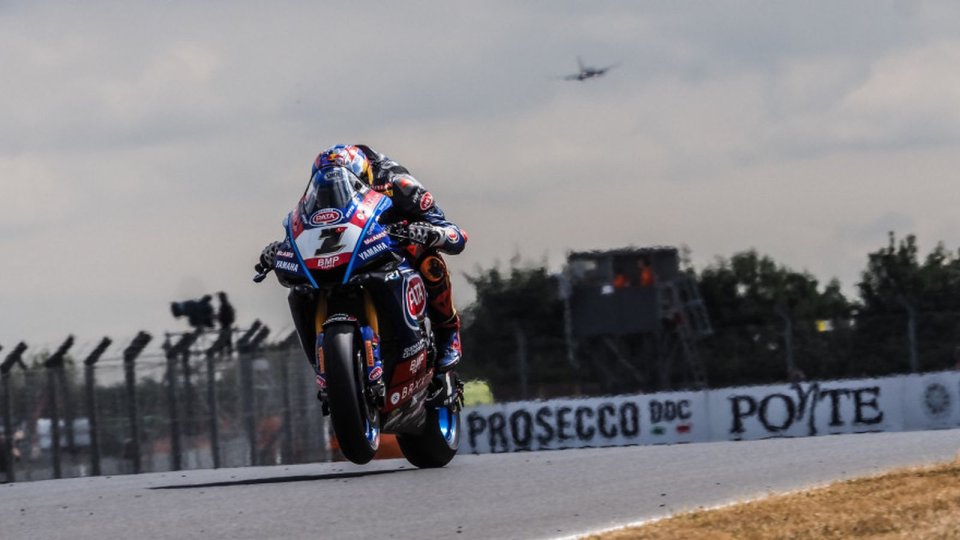 On the same circuit where he won a peremptory double last year in the long races, Toprak Razgatlioglu finished in second place in Friday’s World Superbike free practice at Donington Park. At the top during the morning, in the afternoon FP2, Pata Yamaha With Brixx’s reigning champion stopped half a second behind the leader, Jonathan Rea.

"I'm not fully satisfied, nor was I this morning, despite having reached the top time in the FP1. We tried to find a fair compromise from a race aspect, considering that I haven’t  gotten on the bike in over a month. We’ve made some progress with grip, but we need more. In braking, I feel I’m doing too many stoppies, especially at the last turn. It’s only Friday. Tomorrow will be a more important day, where we’ll make changes in this direction. In 2021, we started the weekend in a similar way, then we had a great double win thanks to the improvements made on Saturday morning."

What happened with Phillip Oettl? A little misunderstanding?

"After the starting straight, exiting the first corner, he closed the throttle without looking over his shoulder. Just when I was passing. I don't understand why he didn't, and I got angry, rightfully so. I then remained in his wake and, once I passed him, I simply pointed out to him: "Why don't you think in these situations?’.”

How do you explain the time disadvantage on Jonathan Rea in the lap?

"As we all know, the R1's grip fails. This year, we set the times starting on Friday. See Johnny's today. It wasn’t not too far from the track record. In fact, I’m convinced that tomorrow we’ll have a new crono record in qualifying. I'll try definitely try.”

Do you think the door is completely closed for the MotoGP?

"At the moment, it is, because the official team already has two riders (ed. Quartararo and Morbidelli), while there will no longer be satellite teams in Yamaha. As for me, I have a contract with the parent company and, next year, I’ll stay here in the Superbike. As for 2024, I have no idea."

Tell us about your first ride with the M1 in Aragon?

"Compared to the R1, with which I usually race, they’re two very different bikes. The braking is incredible, since you use only one finger to do it. Instead, I felt higher than I should in terms of my position. Anyway, I only thought about riding and enjoying the moment and, overall, I enjoyed it. Every rider dreams of getting into in the MotoGP one day but, right now, this isn’t the case for me, because I'm not that young anymore."

"1:49.6, before lunch. I think I could have easily went under ’49, maybe even reach ’47, but  it unfortunately rained in the afternoon. Overall, I rode about an hour. I  need more time. In the first round, I wasn’t comfortable, then we made some changes on the electronics, and the sensations were much better. Round after round, I had to adapt to the M1. I realized it was impossible to ride it with my classic style."