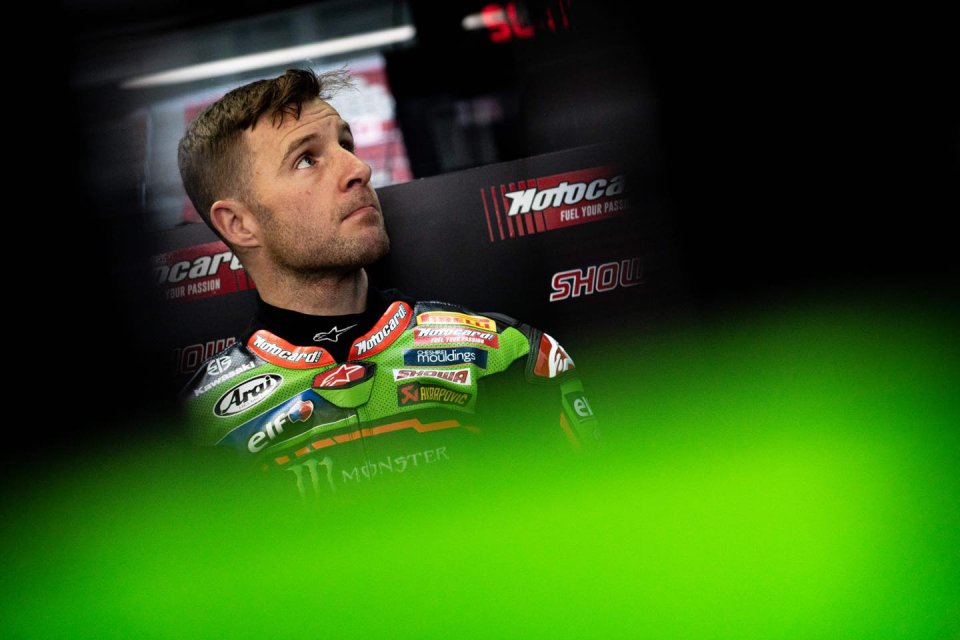 The Superbike World Championship has arrived at Donington and for the occasion Johnny Rea agreed to give us this long exclusive interview. The Northern Irishman talked about himself between the past, present and future. There are the memories, the challenges of the past, but above all attention turned to this year’s Championship, where Jonathan arrives at his home round with thirty-six points to make up on Alvaro Bautista (Ducati).

“As you all know Donington is a special round for me - he started off - it is my home race, here there will be many fans ready to support me during the weekend, mainly from Northern Ireland. For my part, there is a lot of curiosity to see what my potential will be and to be competitive. In fact, in the last month we have done tests at Aragon with the intention of being ready and aiming for victory ".

How much has the Kawasaki improved after the last tests?

“Honestly, I don't know how to quantify it, I was able to be faster than my fastest race lap and I learned a lot about what it takes to have the best Kawasaki. Here we will start from scratch and as mentioned the goal is to try to do my best. Apart from Race 2 in Assen it was certainly a good start to the championship, and we are now only a quarter of the way through the season. Anything can happen with three races over a weekend”.

You come to this race with a 36-point gap from Bautista. Are you worried?

"No. I am of the idea that we must always deal with the reality of the facts, but at the same time be aware that tomorrow is another day, different from today and we cannot know what will happen. Maybe today was a shit day, where something went wrong, but tomorrow could hold something surprising. If I think of Misano, just to give an example, it is obvious that it did not go as I hoped. But now we are at Donington and in two weeks we will be racing at Most. I know that Bautista and Ducati are strong, but I must focus on myself and get the maximum potential out of my bike to be competitive”.

Johnny, you discovered the taste of defeat last year. How difficult was it to accept?

“Last year I didn't have the best package and I made several mistakes. I had to accept defeat and think about how to start to be the best again. It would have been worse if I lost on the best bike, crashing many times. I was defeated against Toprak in 2021, but at the age of 34 the decisive aspect was turning second place into motivation to try again this year. "

Was it more difficult to accept early 2019 or Toprak’s title?

“It was more difficult to accept the start of 2019. Alvaro was a new rider, and he was winning the races by 15 seconds. Inside of me I just thought of giving my all race by race, aware that he was human like me ".

How would you describe Razgatlioglu and Bautista?

“Toprak and Alvaro are two different riders. Toprak is someone who understands and knows how to get the maximum potential out of his bike. Alvaro, on the other hand, is someone who knows how to adapt well, even if with Honda we saw a lot of up and down days on his part. But now I believe Alvaro and Ducati have complemented each other. The Panigale is a MotoGP-style motorbike”.

In the head-to-head who is the toughest?

“They are also different in this. Toprak is tough in the battles”.

Were you surprised to see Toprak so far behind in this early part of the championship?

“I am surprised, I can’t deny it. When you put number 1 on the fairing it is always extra pressure, and you must win. " .

Let's talk about the future for a moment. There is a lot of anticipation for your 2023.

“It's still early to talk about it and my mind is focused on this round. But Chuck Aksland, my manager, will be here in the evening and we will try to understand more starting on Monday. After the race, we’ll talk about it”.

“I am proud and lucky to have a woman like Tatia at my side and at the same time also our children. Initially I wanted to keep the family away from racing, I didn't want them to interfere, so that I could be focused on the bike. Time has helped me understand the importance of having them at my side and I can't wait for them to arrive here at Donington. Spending time with them allows me to disconnect from this world as well as recharge the batteries. In addition, we also play football with my boys”.

“Sure, I support Leeds and Barcelona. I'm a fan like many others”.

How do you imagine Rea in 10 years?

“Honestly, I don't know. I'm afraid to think what I'll do in 10 years, I'm someone who lives day by day. For sure I will have already stopped racing”.

Are you afraid about your retirement?

"I’m a bit afraid from a mental point of view and I can't hide it. But the next challenge will be to find something that motivates me the day I quit.”