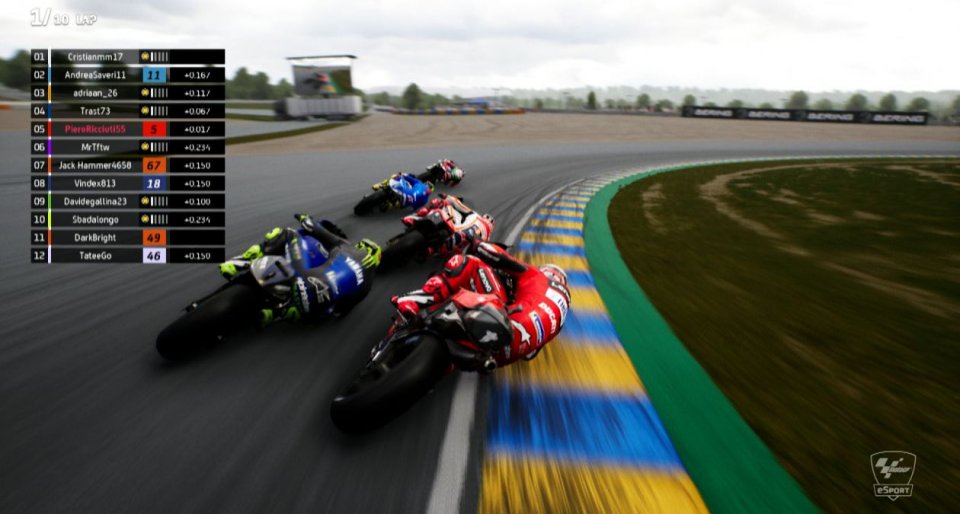 Today, Monster Energy Yamaha MotoGP‘s Lorenzo Daretti (aka 73Trast or Trastevere73) cemented his position as a firm favourite to take the 2022 MotoGP eSport Global Series Title. The three-time MotoGP eSport Champion (in 2017, 2018, and 2021) withstood the heat of rivals trying to pass him in both of the Round 2 races to secure a first and second place.

Unlike the first round held live at MotoGP‘s Italian GP at the Mugello Circuit, for Round 2 of the MotoGP eSport Global series the eRiders competed from the comfort of their own homes. As it was a race from home, the points were halved.

Trastevere73 had a strong start in Le Mans, but still briefly found himself in fifth place after the twisty first sector. The Italian knew he needed to make a move early on to prevent his rivals from breaking away. The experience of the three-time World Champion came to good use as he overtook one rival and then three riders at the same time in a brilliant move to put himself in the lead. The strategy was then to keep his head down and find the perfect balance between pushing hard, riding faultlessly, and defending his position from a charging adriaan_26. The Yamaha man steeled his nerves and held off an attack on the last lap to take the victory by 0.968s. It earned him 12.5 points.

The race in Assen was a real challenge of mental endurance for Daretti. After he slotted into second place through the first corner, he tried to stay as close to adriaan_26 as he could in the first laps. But soon he made the calculated decision to focus on defending his second place from AndreaSaveri11 and Cristianmm17 to solidify his lead in the championship standings. He came under pressure in the last minutes, but Trast73 remained cool and took second place, crossing the line 1.336s from first and gaining 10 points.

Trastevere73‘s efforts in Race 3 and Race 4 of the Global Series helped him to a 60.5 points total that keeps him first in the rankings for the 2022 MotoGP eSport Championship, with a 6-point advantage over his closest rival.