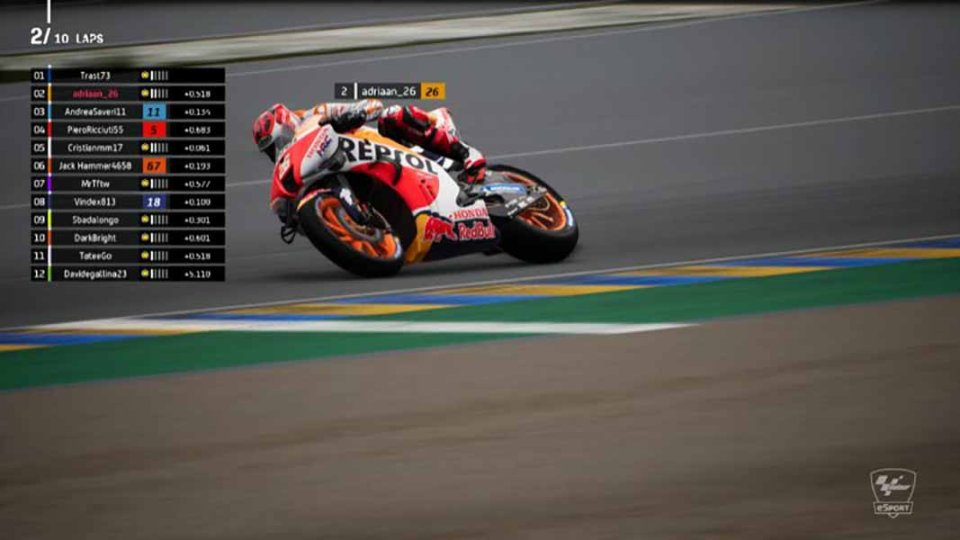 It's a tough time for the Repsol Honda team, but not in eSports.

A victory and a second place at the second round of the 2022 MotoGP eSport Championship move Repsol Honda Team’s Adriaan_26 to just six points shy of the lead.

After a thrilling start to the competition in Mugello, the MotoGP eSport Championship was back in action for a virtual second round. Races in Le Mans and at the TT Circuit Assen saw the 12 contestants pick up their controllers and battle it out online.

At the first race of the event in Le Mans, it was again Adriaan_26 on the virtual Repsol Honda Team RC213V and trast73 who were in a class of their own. The pair were almost untouchable as they broke over three seconds clear of Jack Hammer4658 in third place. Ultimately Adrian would be forced to settle for second as his championship rival trast73 was just able to open a 0.9s advantage. Important points with the long game in mind.

In the second race Adrian was not settling for anything less than first place as the Repsol Honda Team rider put his head down and pushed to break away. Consistent times saw him open up a gap of just over one second as trast73 and AndreaSaveri11 battled it out behind him. Achieving victory, Adriaan_26 stays right in the battle for the championship with 54.5 points, six points shy of his Yamaha rival.

Round three of the 2022 eSport season will take place on August 26 with races at Jerez and the Red Bull Ring.