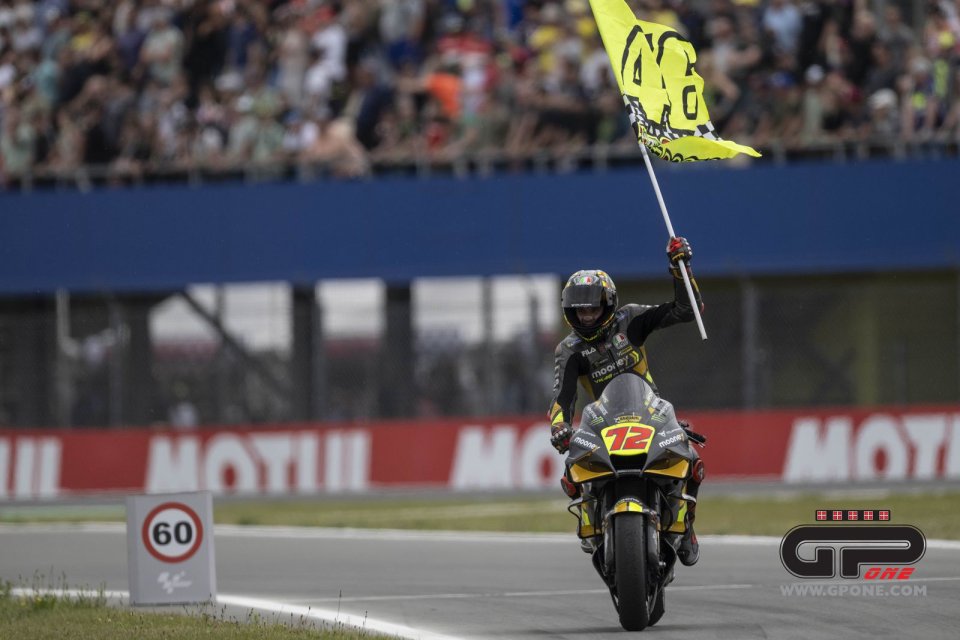 A first podium in the MotoGP is always a very important moment for a rider but, if this podium is on a track like Assen, everything is different. Marco Bezzecchi managed to end a perfect race in second place behind Bagnaia today, during which he made the most of the great opportunity that he was served on a silver platter by Fabio Quartararo.

A second place that’s worth gold and that projects him further into the role of rookie of the year during a season in which he continues to progress with each race, confirming all his talent and offering much more than a smile to a Ducati that’s aware of having another talented rider on its team. The emotion on his face was very clear in the interviews at the end of the race. He thanked Valentino Rossi. A kind gesture from a guy with a huge potential who’s really exploding.

"I don't know how to express this emotion,” Bezzecchi said smiling. “It was fantastic. I started out well, but not very well. I wanted to be there with the top ones, because I knew I could be fast. I was catching up to Fabio and Aleix. I saw an opening, and I tried to go after Pecco, pushing like crazy. In the end, I always had good grip. I didn't have to manage the tires much.. I’d say it went really well. When I saw the rain, I saw the drops, and I realized that it wasn’t much. I saw Pecco approaching, I tried to stay focused, and I just kept pushing to the limit.”

A podium on a special track.
" I was happy here in Assen. I really like to race here. I’ve always liked the turns while, where there’s a fast braking point, I’m still not perfect. But I was efficient everywhere here, so I want to take a good look at the data, but I hope I learned enough to always be competitive. I still have to get used to pushing so hard on the front. The more you push our bike, the better it behaves. It takes confidence to do that. I'm getting there. I wanted to say hello to Vale. Sending him a hug. They gave me his flag on the track. Thank you.”

Tell us about the flag.
"I think the commissioner wanted to give the flag to Pecco, but I took it because he went to greet his fans! It was great. Vale and the whole Academy did an amazing job. Without him, I wouldn't be here. He took me on when I was fifteen. Being here is fantastic. This is for him and for the Academy. They support us a lot, and I think they’ve really progressed this year."

Did you expect the podium in Assen?
"I had never been on the podium in Assen, but I had already come close. I honestly thought I could fight for the podium. I talked to my girlfriend about it. I was wondering where I could put my first MotoGP trophy in the house! I have to say, before Mugello, I dreamt of a pole, and I got close to it. Here, I dreamt of getting on the podium, and here I am. I think the work in the garage was great. I just tried not to push the soft tires too much. I followed Pecco, and it worked."

Do you think this podium represents the classic step for you?
"This podium is important to me. Something I dreamt of conquering. I didn't expect to do it so soon. I'm still a rookie. This is my mentality. When the second part of the season begins, I don’t want to expect to do all races like this, because I already know that there will be tracks where I’ll suffer a lot and others where I’ll suffer less. The best way to progress is to try to do your best and, when there are opportunities, take advantage of them. Get the most out of every day, even if it's an eleventh place. The podium would be better, but I'm a rookie, so I think it's normal to have highs and lows. I learned a lot this weekend, because I’ve always been ahead, but the real step will come when I learn other things, and there’s a lot missing."

What did you think when you saw Fabio's mistake?
"I saw Fabio. He tried to pass Aleix at five. When you try to close the trajectory, it becomes difficult. Maybe he was a hair too fast, maybe he pulled the brake too hard to not touch Aleix. When I saw them outside, I just kept on going.”

How do you rate your first half of the season?
”The first part of the season was fantastic. I would have liked to do more only in Barcelona. I was fast, but then I made a mistake in the race. I made a mistake similar to Austin, and that's not good. I always learn something, and I know that I’ve learned a lot here too."

“Kazakhstan is absolutely absurd.” Ezpeleta’s response: “Without Sokol, we would have stopped for 5 weeks. I could live with 15 races a year, but my...
1 day 16 hours ago

The MIE Racing Honda Team thus completes its line-up for the 2023 Superbike World Championship season with two talented and fast riders who are both...
2 days 6 hours ago

2021 British Superbike Champion Tarran Mackenzie leaves the McAMS Yamaha team after six years, with a new adventure on the horizon in the Supersport...
3 days 3 hours ago