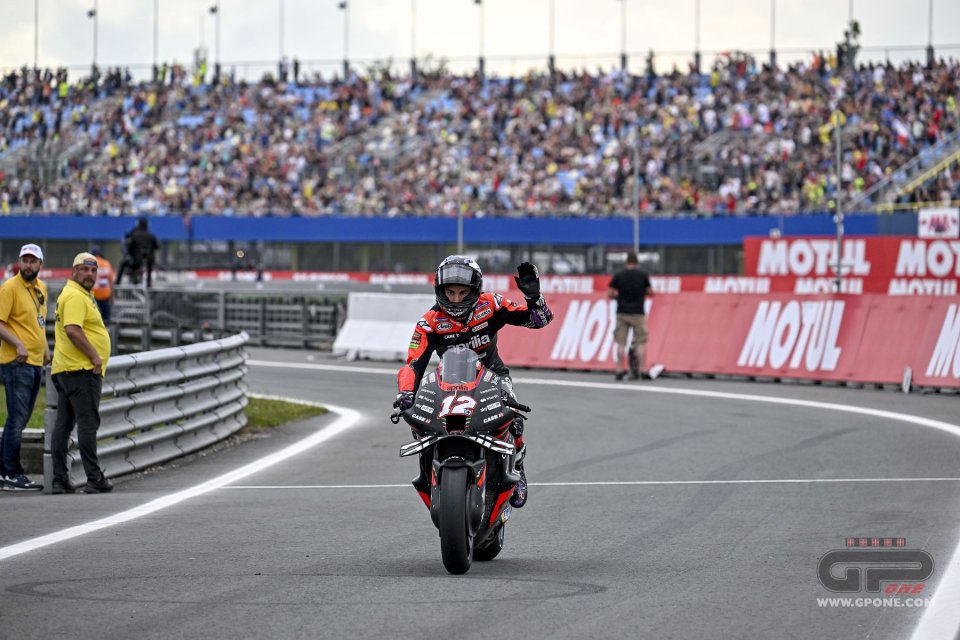 Assen was the last track that saw Maverick Vinales on the podium with Yamaha and it was also the first track he managed to do so with Aprilia. Maverick's long journey to returning to being a true top rider in all races might not yet be over, but certainly today he reached a point never reached before. Third place behind Bagnaia and Bezzecchi came about thanks to a perfect race, with the help of Quartararo who put himself out of the game by himself, penalizing Aleix Espargarò as well.

But this does not take away any merit from the Noale manufacturer’s Top Gun, perfect in the initial stages of the Grand Prix and able to pass his opponents by sprinting from the 11th grid slot up to a step away from second place. At a certain point, in fact, Maverick had almost caught Bezzecchi's slipstream, but today's third place represents a fundamental result for his continued growth with the RS-GP.

"I think I have to thank not only Aprilia, but also Aleix - said Maverick - he was the first to help by convincing me to come here. Then my wife, my mother, always gave me a smile even when things were going badly. Then Aprilia is doing an incredible job, we work together with the mentality of a group that is hungry to win. I thank the whole Piaggio group. They have an incredible trust in me and this makes me give more than 100% on every lap, at every race! I will be fast in the next Grand Prix for sure, I fought for the podium at the Sachsenring too. Silverstone is one of my favourite tracks, then there is Misano, they are all circuits that I like. I want to push everywhere. Over the years I have learned not to stop and always try to push and improve. To get to win you need this mentality ".

Was it the race you dreamed of?

"It was a tough race, I came from Sachsenring where I knew I could fight for the podium. After the warm-up I knew I could stay in front, I can only say thanks to Aprilia, they have always believed in me. Our potential is very high now. There are tracks where I know I can fight for the win. The level is very high, but we are getting closer. I am the happiest man in the world. I have a great group, they push me. I have everything I want, a dream family. I'll do everything to get stronger, I know what I'm capable of. We will see where I'll be in the last race of the season. "

What did you think brought about this podium?

"It's a result of our hard work. My pace is always very fast, but starting from the back it was never possible for me to do well. I knew I could stay in front, but I needed to improve qualifying. In these two races I did some excellent starts, then the pace helps me. But I also know that if I started in the first two rows, I would have enormous potential. In qualifying I can't get the most out of the bike with the new tyres and this slows me down. I more or less do the same time with used and new tyres, but we have to learn how to sort out the bike for a flying lap. "

Vinales: "If it were necessary for the world championship, I would let Aleix pass"

It was a great race for Aleix, who was right in front of you when he went off into the gravel.

"Honestly, I thought Aleix had retired! When I saw him I thought, damn he's really fast. I'm happy for Aprilia, nobody gives up here. I'm also happy for Aleix, he's got closer to the world championship. If I can help him. I will. We work as a team, we have been doing it very well from Mugello and this is helping us a lot. He is very close to the world championship, we have to think about team games. If in some races I were to be faster than Aleix, but there it was important for him to finish ahead of me for the world championship, I work for Aprilia and I would let him pass. We work together, as a team. It is clear, if he were to race for the title, I would do my part. "

Can you explain your teamwork better, what do you mean?

"We work a lot together, there are tracks where in some points I am faster than him and so is he. We show each other where we can improve. Off the track we are both concentrated, because we have a dream and that is to win a world championship for Aprilia. We want to take this bike to the top and we are working on it. I continue to learn from him, because for him this bike is like a glove. But he too is learning something from me. "

How would you rate this race in your personal ranking?

"I think it's the fourth best race, the first podium with Aprilia is special. We could have done better if we had started from the front. It’s two races now that I’ve done an incredible first lap, a helluva lap, I’ve been struggling at the start for seven years, finally it went well.”