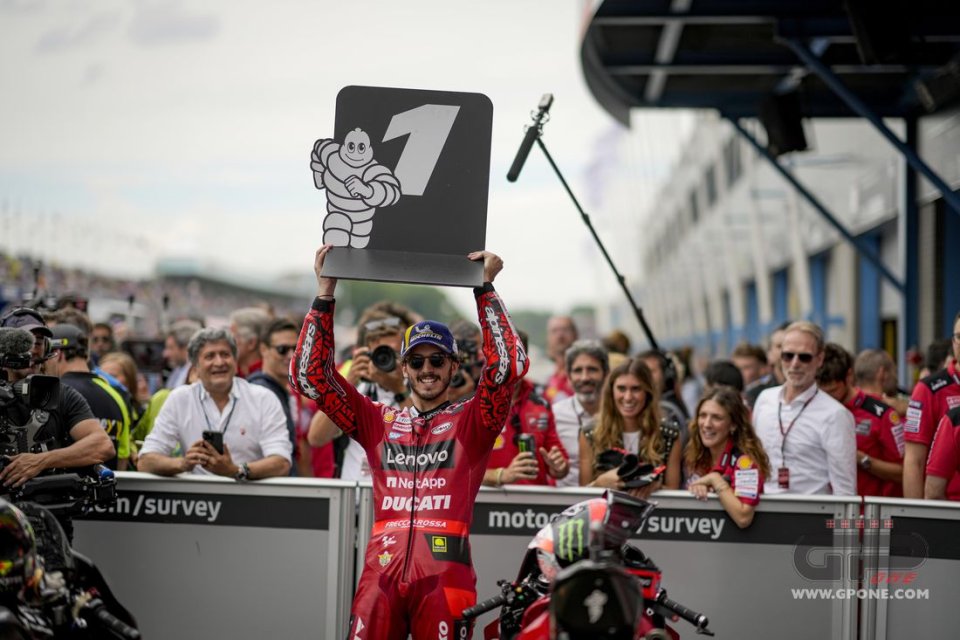 The victory at Assen for Bagnaia cannot be considered normal. Not on a track where Ducati had won only once, in 2008, not after the Sachsenring mistake and his empty run in Barcelona (the one in which he was innocent). Fast yes but strong no, to put it in his words: today he managed to square the circle. He took the lead, he kept out of trouble and when he saw Quartararo on the ground and Aleix Espargarò off the track he just thought about managing the situation and taking his third win of the year.

“Even though I said that today we just had to finish the race, I knew I had to win, try to recover some points - Pecco can admit with a sigh of relief - Honestly I had a lot of fun, it was a special race. I got a good start, I attacked at the first corner, it was very nice ”.

Did you know you could do it?

“Being sure I can do well always helps a lot, but today I was terrified of crashing again. Now I think I understand what I was wrong, I took a step forward and going on vacation after this race gives me a big relief ”.

How do you react in a difficult moment like the one you were going through?

“I am lucky because I have people close to me who love me and know how to help me. I'm talking about my girlfriend Domizia, my family, in the end they suffer with me when things don't go well, this is everyone's victory ".

How did you obtain it?

“I knew I was fast, in the end you have to be sure of yourself, and I also knew that by working in the right way I would have the opportunity to fight for the victory and the podium. At Sachsenring, as well as in Barcelona, ​​I worked for the race in all the sessions, but then I made a mistake. I was unlucky at times, but I was always fast so it was easier to start over. Today I was terrified of crashing, of making another mistake, I tried to manage everything in the best possible way, even when it started to rain ".

Was that the most difficult moment?

“It wasn't easy today, I had to open this gap again to be smarter and more calm again later in the race. I had been working well all weekend and arrived prepared for the race, but I didn't expect rain and got scared. I wanted to manage the situation but Bezzecchi was recovering and it wasn't easy to get back to pushing. It was easy to make a mistake. My problem was that I saw the rain and I was thinking it was more slippery than what it was in reality. I lost a lot of time, and he was catching me like it was not raining. I was pushing without pushing because when it's raining you can’t hit the corners like normal. But I found a way to ride and it was ok.”

Did you know what you had to do to not make mistakes?

“As I said, I was terrified of crashing after the two races I came from, after 2 zeros. I pushed at the start to get a bit of a gap and after the contact between Fabio and Aleix I was calm but continued to push. But looking at the gap with Bezzecchi, he was always catching. But then the rain came. When I saw the rain I just slowed down a bit, but Bezzecchi was pushing again. So, it was very difficult. I was terrified to crash again, so the main thing was to finish the race. It wasn’t easy, but I tried to be smart, I tried to not push over the limit.”

Could you have also won against Espargarò without his accident?

"I don't know, I did my race and I managed it well, he showed he had a great pace but also because he had to recover. I did a different race, I didn't have to be at the limit but to manage. What I have learned is that being calmer is better. Aleix certainly could have fought with me, but I don't know how it would have turned out. You can’t do much with 'ifs' and 'buts' ".

Since we still don't know who your teammate will be, would you like it to be Bezzecchi?

“First of all I am very happy to have made this race against Marco, I am happy for him and for his team, I think we will celebrate together. It would certainly be nice to have Bez in the team, but I don't want to get into this sort of discussion. Whoever my teammate is will be fine with me, he'll just have to understand our job and be part of the team ”.

The GP21 continues to get on the podium, are you surprised?

“Looking at the rookies' results, I'd say it's a good bike to start with, it's competitive. When I started in MotoGP it wasn't like that, my bike was a few tenths slower than the factory. When at the beginning of the year I saw Bezzecchi, Di Giannantonio and also Bastianini with the GP21 I knew that they would be competitive. It's similar to mine, they are doing a great job and I'm on the best bike of last year ”.