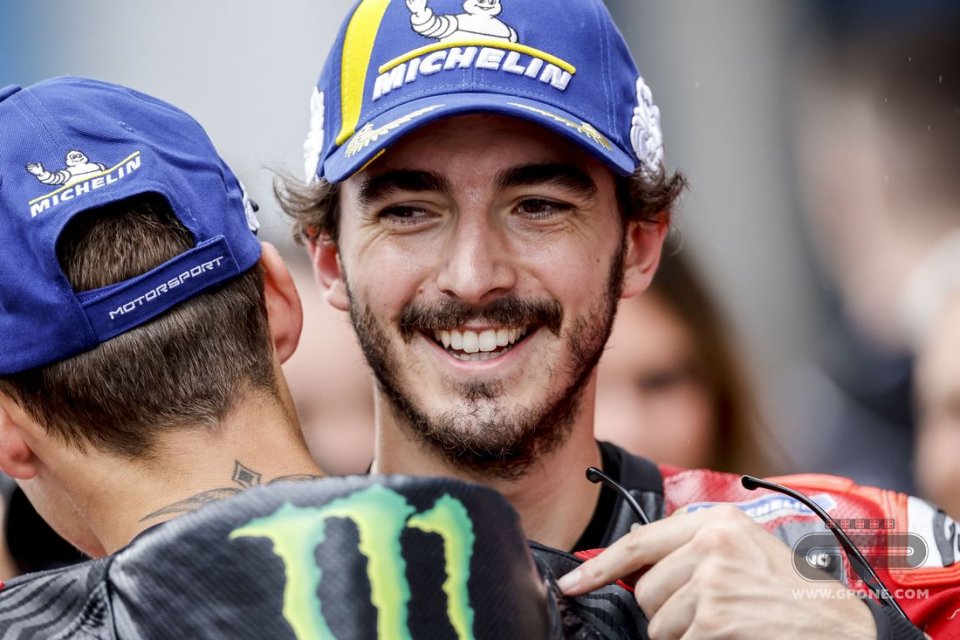 For Pecco Bagnaia, the pole position at Assen was the second in a row, the fourth in the last 6 races. After all, there is no doubt about the speed of the Ducati rider and the new track record set in qualifying is further proof of this. However, as he himself said, it is not enough to be fast to win championships, but you also have to be strong. Exactly like Quartararo, who in fact will start alongside him.

This does not mean that setting such a time on a circuit that usually is not favourable for Ducati is a great satisfaction. “After I did it I stopped because doing better than that was impossible for me, if someone had beaten it, it wouldn't have been a problem” smiled Pecco. Nobody did and tomorrow he will start again with a clear track in front of him.

And just think that the day hadn't started in the best way, but Bagnaia and his team managed to sort out the problem in time for qualifying.

"This morning I was struggling to be competitive - he admitted - But in FP4 we found the right way to work and I'm happy".

FP4 is the most important session, the one in which "you understand which tyres to use in the race" and you lay down your own pace on the table. Even in that case it was a head to head between Bagnaia and Quartararo.

"Fabio has always been competitive on this track and I would like to fight with him, but at the end of the race and not in the first 2 laps - joked Pecco remembering Sachsenring - Espargarò and Martin have also done a great job these days, in Assen it is difficult to open a gap, but both Fabio and I are fast already in the first laps and maybe it will be possible ”.

Also because it seems that the tyres will not be a limit.

“I am my only limit, considering the last few races - he said ironically - In FP4 I was able to push for all the laps and it only happens on a few tracks, for example at Misano. There is a lot of grip and little tire wear, only the most difficult races of this kind because you can't relax, but I like to race like this."

Everything is in his hands, with the knowledge that he has everything to aim for victory.

"If I make a comparison with last year, I feel better on all tracks. At the end of last season I took a big step forward in performance and that helps me. Here I feel better in the fast corners, I manage to close the line, the area where I struggled a year ago, here and at the Sachsenring," he concluded.