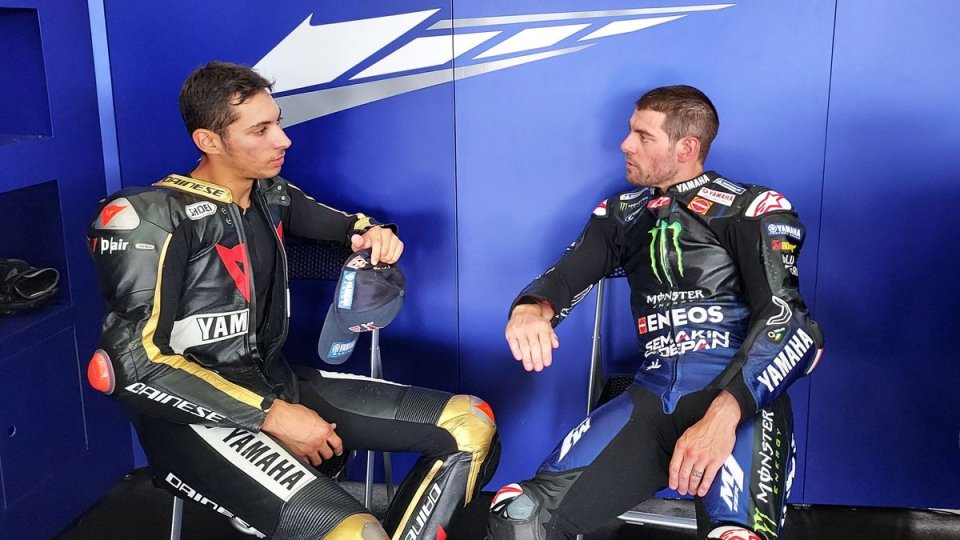 The long-awaited day as finally arrived.  In Aragon, Toprak Razgatlioglu was able to carry out the test on the Yamaha M1he had been waiting for, along with the Iwata constructor’s test team and the support of Cal Crutchlow, who was a sort of like a coach to Toprak. He completed 40 laps riding the M1, in hot and torrid conditions, as it always is this time of year in Aragon.

Crutchlow did his job  as a tester and provided the SBK world champion with a very useful reference on the track, setting what the limit could be to reach. The rain stopped the test in the afternoon, preventing Razgatlioglu from probably performing the classic end-of-day time attack. No data was released by Yamaha regarding the times set by Toprak and no photo of his riding the M1 was provided which, honestly, is strange.

"This was my first day riding the Yamaha M1 MotoGP,”  Toprak said at the end of the day. “And it seemed completely different than my R1. More horsepower, different electronics, the seamless gearbox. All this is completely new to me. I learned more at every lap because, after getting used to my SBK R1, adapting to the MotoGP isn’t that easy. Fortunately, I had Cal Crutchlow at my disposal, who helped me a lot."

Razgatlioglu at least enjoyed his experience on the bike but, at the moment, there’s no plan to bring the Turk into the MotoGP in 2023. He could aspire to enter the it at the end of the upcoming season, when several MotoGP contracts will expire, including Franco Morbidelli’s who currently resemembles the shadow of the mesmerizing rider from 2020.

"The bike feels good, especially on the straight, where it is really fast." Toprak continued. “And it was interesting to try the carbon brakes. It was very hot today, so we limited ourselves to doing five or six laps only after the initial twelve laps, in order to get a feeling with the bike. When I watch the MotoGP on television, you see that the Aragon circuit is a bit disconnected, and today I realized that myself. It’s not so bad. You have to keep the throttle open to overcome the roughness. If you close, the bike becomes more unstable. Overall, a very positive test, even if it was interrupted by rain in the afternoon. This didn’t allow me to do all the laps I wanted. I really enjoyed riding the MotoGP, so I thank Yamaha for giving me this opportunity."