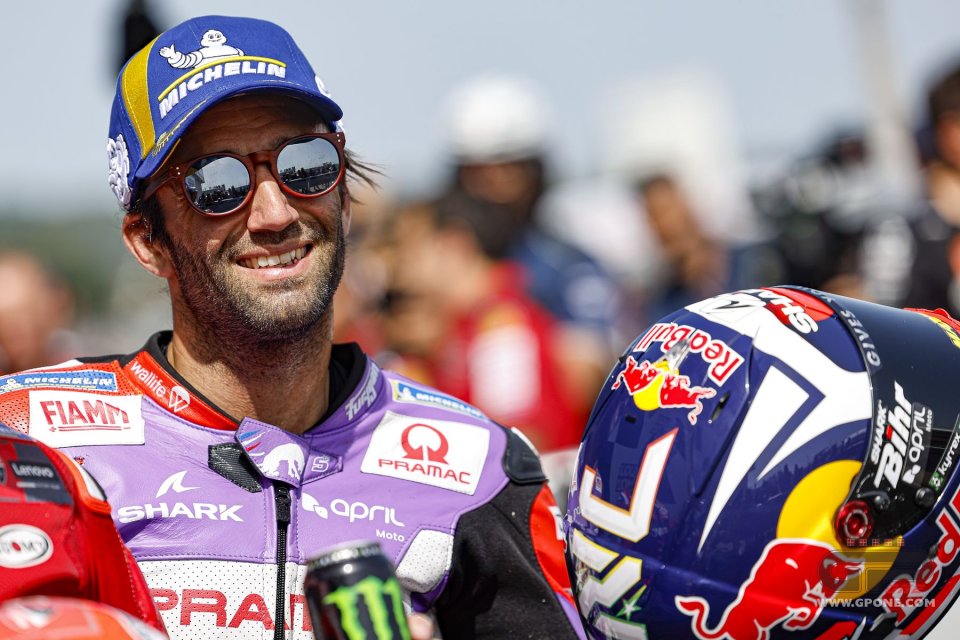 Johann Zarco was able to conquer a very important podium at the Sachsenring, confirming himself as a fundamental rider for Ducati. In fact, the Frenchman represents an unshakable certainty, the classic rider capable of being consistent and concrete and able to put ‘hay in the barn’ when things are not going well for others.

Today the Frenchman finished behind an uncatchable Quartararo and thanks to the 20 points he climbed to third place in the overall classification, the best Ducati rider in the standings after ousting Bastianini, who despite having won three races, is unable to be consistent enough to fight at the top. Zarco has not yet signed the contract that will see him in Ducati again next season, but it is clear that the place will also be his in 2023 and probably in 2024.

"A really good day - said a smiling Zarco at the conference - Starting third was an advantage, I wanted to start well and I knew I had to be fast right away. I knew that Fabio and Pecco had a better pace. Then I realized I had a better pace than Aleix who was ahead of me and passing him was another very important moment to get on this podium. After Pecco's crash I found myself second behind Fabio by about a second. I did what I could to follow him and stay with him, I knew he had an medium behind while I had chosen a hard one, so I thought it would be an advantage for me. But in the middle of the race I saw that he still had great grip, while I was starting to suffer, so I decided to try to stay as close to him as possible and that gave me a huge advantage over third. In the last laps it was a nightmare, from all points of view, even physical. But I had an advantage that I could control".

Overtaking Aleix was a wonderful move.

"I was happy to make that overtaking on Aleix, at the point where I did I knew the tires would help me as long as they were in top condition. I took advantage of the moment, with a little more acceleration. I was worried about seeing the front close there, but even if Aleix tried to resist me I was able to keep it open and pass him. Thanks to this I am second today. "

Now there is Assen, do you think you can be just as fast there?

"Last year Assen was a good race, Pecco was strong but he had a long lap penalty. The Ducati works well everywhere, the potential of our bike is enormous but sometimes it's hard to make the most of it. I'm happy that my level today on this bike is this, I hope to do just as well in Assen and maybe even be able to have more fun riding in a more relaxed way ".

Do you now think you will receive more support from Ducati since you are the first rider in the standings for the manufacturer?

"There will not be any more support from Ducati, I already have excellent things from them. We are like an official team, we have the best. We have every chance to finish up front, I have been the most consistent rider in the last 4 races. There are 8 Ducatis on the track and this helps the riders to have more data to improve and it also helps Ducati to give the best possible material to each of us. There will be no more support because I am the first Ducati rider in the standings, I already have the best support from them. Now there are a Yamaha and an Aprilia ahead of us in the standings. The Yamaha with Fabio is in an incredible moment, while Aleix is ​​the real surprise of this season. We in Ducati have enormous potential, but with the GP22 we also had some problems at the beginning of the season. When you reach the maximum potential of our bike, you set records and win races, so that's what we have to do. We are halfway through the season, I don't ask for more support. "

Do you have higher expectations now?

"I have no expectations anymore, the level is very high and I just want to do my best. Just getting on the podium is very difficult. This year I didn't start very well, I did two crashes but now I'm third in the world championship. I'm happy with that, but my strategy doesn't change. I know I can do a lot, but it's not easy and now I just have to put my energy together to give my best in the race weekend".