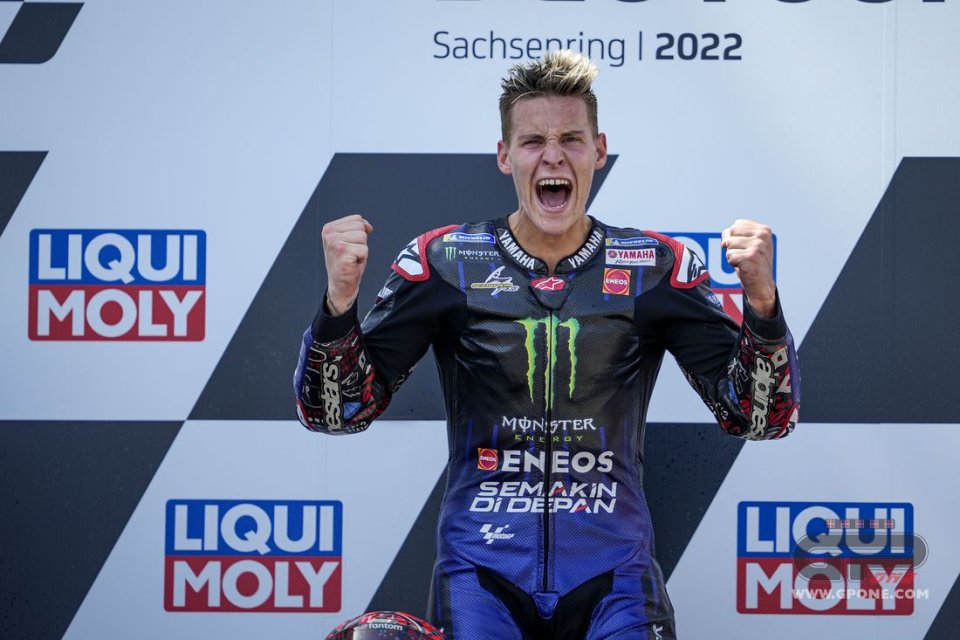 The right thing at the right time: winning when your opponents are struggling. Fabio Quartararo had perfect timing at Sachsenring, dominating and managing a race that if it is not worth a title, is pretty close to it. For Yamaha’s French rider this is the second consecutive success, with Bagnaia once again out of the race, Aleix Espargarò off the podium and Bastianini in the rear.

"I'm super happy. A really, really special victory. It was a little bit like Barcelona. On Friday I was not so great, yesterday was much better and this morning with used medium tyre I felt it was the correct choice. In the race the conditions were totally different," he explained.

And he had opted to bet on the medium rear tyre.

“From the beginning I was a little bit scared because I was using the tyre a little bit more than expected to ride fast - he confessed - The last five, six laps were a total disaster from the rear. But the feeling on the front was super-good."

That's how you win with the M1.

"We must always be in the first positions because we struggle to overtake - he said - In fact at the first corner I threw myself in to be first, we need to take advantage of those opportunities".

Fabio knows how to do it perfectly.

“In the early laps I knew most of the riders had hard rear tyres, so when I took a second advantage I started to control, not push too hard – was his strategy - The conditions were very difficult, I accelerated only when Zarco got closer, but above all I took great care of the tyres ”.

"I saw it on TV, on the big screen between the third and fourth corners - he said – For sure from then on my race changed a bit because Pecco was the fastest and most consistent rider".

Now Quartararo can look down at everyone from even higher in the standings: Aleix Espargarò at +34 points, Zarco at +61, Bastianini at +72, Bagnaia at +91. Above all, he is the best rider at the moment for speed and consistency of results.

"I'm still learning and I feel like every time I find something - he declared - The focus here to make 30 laps in front and to be consistent was something difficult. Barcelona helped me a lot because I had a similar situation, but of course I'm feeling confident and I feel I'm riding better than ever."