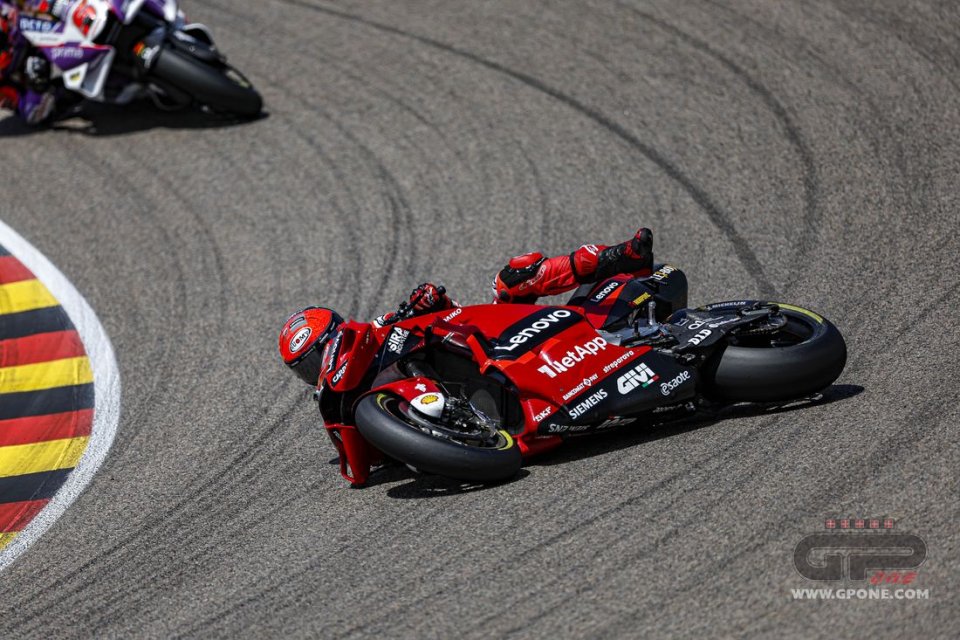 Bagnaia consoles himself by biting into a hotdog, "I deserve it with all the calories I burned in the race" he tries to joke. The mood seems slightly better "but only because two and a quarter hours have passed" he is keen to point out. That crash, on the fourth lap, he is just unable to digest. It means having thrown away another race and also the championship.

Was it your mistake or did something strange happen?

"Let’s start by saying that I was on the bike, so if I crashed I made a mistake, but the dynamics were very strange. It is difficult to see riders turning around in acceleration with today's MotoGP bikes, I did more than 70 laps each day and in any of that I didn't feel a close thing like this. I didn't expect it and it surprised me. I'm still very angry because I don't think I could do anything different, the telemetry shows that I had accelerated more smoothly than usual. Maybe the conditions were really tough, but the way I was riding I wasn't worried about it happening. It went the way it went, but it's a great shame because I threw away another opportunity to stay in front. The only thing is positive is again we were at the top, we were the fastest and I think also looking at the pace that our potential was high. But this is one more time that Fabio is demonstrating that he is more complete than me."

Did it all happen as soon as you got on the gas?

“At the first touch I turned around, as happens with a Moto2 bike in the wet”.

No answer from the data?

"In my opinion, there is no way to explain this crash. I was turning more for the exit, so it's very difficult to understand why I crashed. So, it's the most difficult thing in this moment because maybe our bike is living in a margin like this that if you go wide you crash. But, today my crash is very, very on the limit I think. When I let go of the brakes and went on the gas, I turned around and there were no electronics problems. It's as if there was no grip, but usually you have a warning before and I didn't have it. "

Being unable to give yourself an explanation is what made you angry?

"Looking at the data, it's impossible to understand things. So, I was angry with this because I can't explain it, I'm very angry for that because when you crash and you know why, normally I'm very self-critical. But today I can't because the reason why I crashed is something that I can't explain. So, it's more difficult to accept. I'm trying to repeat in my mind what happened and in any of that I can't explain my crash. For sure, if I crash it's because I did a mistake. But in this situation, it's very difficult to know why, to understand why.”

Now Quartararo has a 91-point lead, what can you do?

“I will always aim to do my best. It was already difficult before, 66 points behind, and now I have many more. There are 10 races left, I will try to do my best to at least finish the championship in a good position ”.