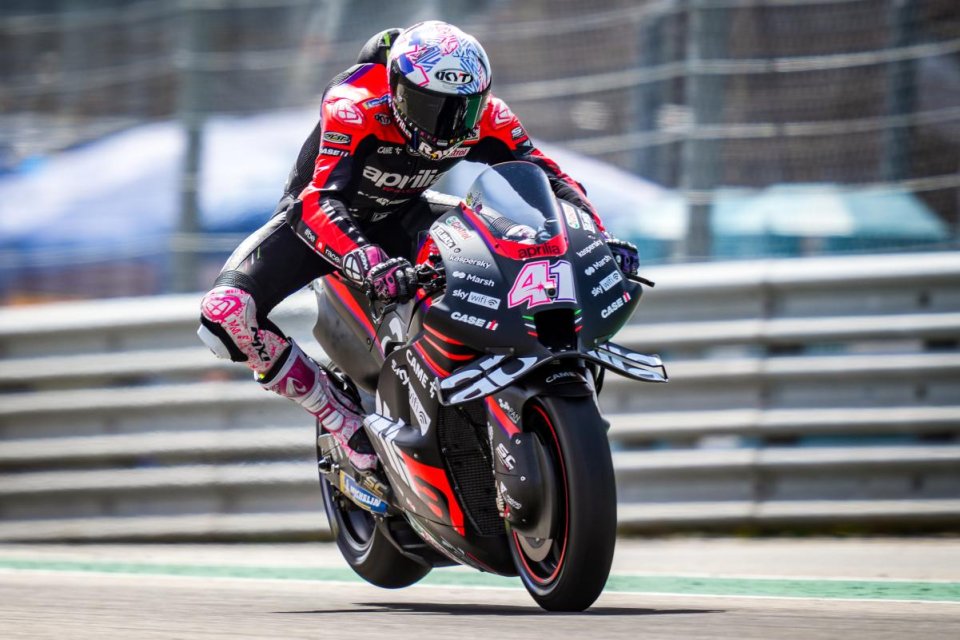 A fourth place with a bitter aftertaste. Aleix Espargarò had other expectations on Sunday at the Sachsenring, but it took little to understand that it wouldn’t go according to plan. A difficult race, where the Spanish rider struggled with the Aprilia and had to console himself with a 4th place on the day when Quartararo triumphed alone.

#41 explained what happened after the race.

"It wasn’t a positive race,” Aleix admitted. “I started to feel the front vibrating. At that moment, I didn’t think it was possible that I’d have to do the whole race with a vibrating bike. Too bad, because it was something really strange and, throughout the entire Grand Prix, I was experiencing continuous vibrations on the front tire. But I pushed, giving it everything I had, finally bringing home a fourth place."

Aleix is obviously disappointed.
"On Friday, I used the hard tire, and the sensations were great while, in the third sector, my strong point, I continued to suffer. I was riding at a high 1’22 in the race, and I felt like I was riding like Fernandez in the Moto2. I tried to control it, but I was very worried, since I was afraid pieces would jump off the bike. Fortunately, however, I reached the finish line."

At the end of the race, #41 spoke to Michelin.
"I told them that the tire was vibrationing, but I don't care much about their judgment, since the race is now over.  I was frustrated when I started realizing these problems. Fortunately, I saw that, in the end, the others also fell and I came in fourth."

In all this, Quartarar'so on the run in the Championship, but this doesn’t seem to worry him.
"Thirty points is nothing. If Fabio falls in Assen, and I win, I'll still be back under. The problem is that Fabio is very fast on Sundays. The World Championship is still long. There are many races an,d in the past, we’ve seen Quartararo make mistakes in the second part of the season. I’m feel really bad about  today because, without that problem, I had Zarco’s pace."