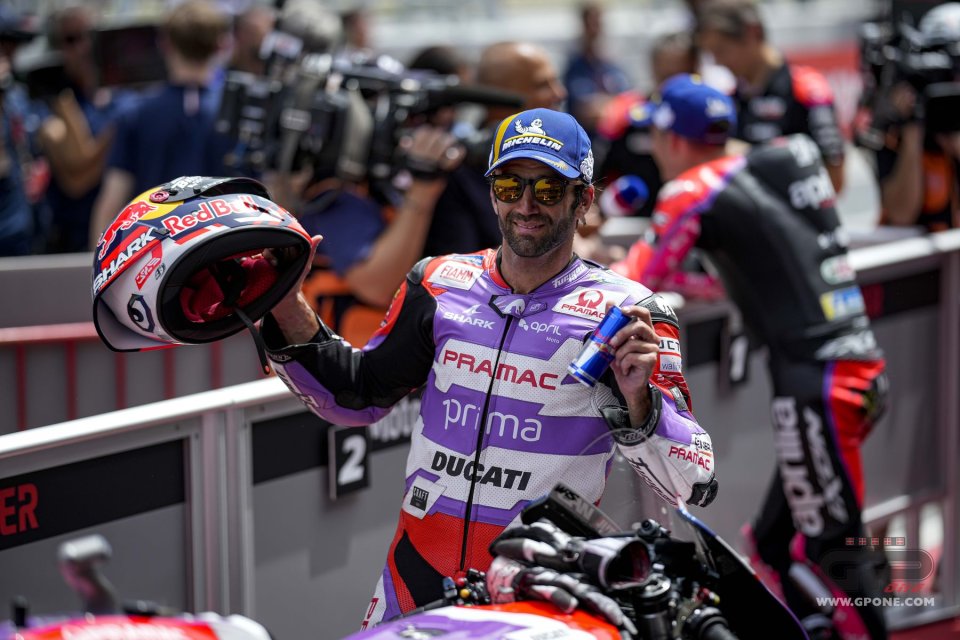 Despite a lack of victories this season, Johann Zarco managed to remain constant, so much so that he was fourth in the standings, three points behind Bastianini. The Pramac rider has traditionally always done well on the German circuit, and although tomorrow's race is supposed to be one of the most challenging, both mentally and physically, the French rider seems to have the experience and ideas on how to tackle the Sachsenring track.

"It was a positive day,” Zarco said. “I had problems in the FP4. On Friday, we retraced our steps and tried some variations of the set-up, in order to understand what works best. Tomorrow, during the warm-up, we’ll take the last steps before the race. The way things are now, Pecco and Fabio have a better race pace than me, and I think Aleix is also a favorite. But if I manage to stay in the leading group, I think I’ll be able to enjoy the race and get a good result."

The conditions of the track won’t be easy. Temperatures will be high and, with so many left-hand turns, managing the rear tire will also be a problem. Can you say that the German circuit will be one of the most challenging this season?
"I don't know if it's going to be the most demanding, not in terms of temperatures. But, physically, that’s another matter. I think a lot depends on how comfortable we’ll be during the race. So, it's hard to make predictions right now. Obviously, tire management will be crucial, but starting in the front row is already a big advantage."

What’s the key aspect of the race?
"The last ten laps will be very challenging, for several reasons. If you get to that point of the race in excellent condition, you could end with a great position. Otherwise, those ten laps will seem really long. It’ll be an exhausting race."

There was another meeting with the Safety Commission yesterday. What did you talk about?
"We continued the discussion about Nakagami’s accident in Montmelò. We riders don’t consider the accident a race accident. Taka wasn’t able to handle that situation. But the real problem was that there was no red flag. At the end of the first lap, the three riders that fell were still in the gravel. It obviously wasn’t an easy situation to manage, but racing at 360kmh is still a potentially risky situation, and it was important to discuss, also for similar situations in the future."

Jorge Martin: the rider will make a difference

Slightly disappointed is his garage mate, who’ll be starting on the grid tomorrow from the third row. Jorge Martin scored the 8th best time in qualifying, almost three tenths of a second from the Ducati ridden by Bagnaia, who today even overthrew former record holder Marquez.

"I expected something more in qualifying,” Jorge explained. “But starting from the third row is no big deal. It’ll definitely be a challenging race, because of the temperatures and managing tires, especially considering that I’ll have to attack to recuperate positions. But I believe there’s a chance of ending up on the podium. A lot will also depend on the pace of the favorites. Pecco, first of all. Tomorrow we’ll work on the warm-up before the race."

In the FP3, Ducati’s dominion seemed undisputed. Then came Fabio and Aleix. How do you explain that?

“This is a circuit where the bike counts to a certain point. Our strength has always been power, but this track is also very important for the endurance and skills of the rider."