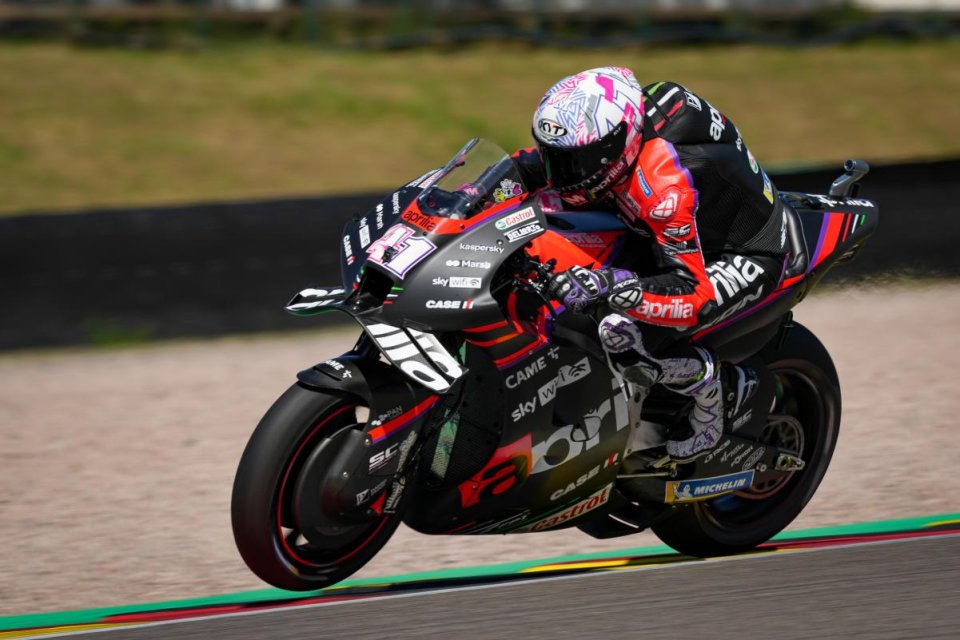 Aleix Espargarò will lead the second row of the Sachsenring GP.  His qualification was incandescent, and the Aprilia rider came up just over a tenth short from Bagnaia’s Ducati. He’s confident in the potential of the RS-GP, but there are also doubts related to the choice of the tire for the race.

"I wasn’t as great today as on other occasions,” he said. “But, in the end, I’m one tenth from the pole. Other than that, I think I have a good pace, more or less like Pecco and Fabio. What worries me is the tire wear, much more than in Barcelona. Here, at the Sachsenring, the Ducati was fast and was confident, especially with the tire, and they also have a great pace. I probably don't think they'll be faster than us in terms of speed.”

Besides Pecco, all eyes are on the leader of the World Championship.
“Fabio has improved a lot compared to yesterday. More or less like he did in Barcelona. So it’ll be important to recuperate points from an overall perspective, but it won’t be easy. To tell you the truth, I had more confidence in Barcelona in the fight for victory. I fear the last ten laps, given the wear on the left side of the tire. I think managing tire wear will make the difference."

This is one of the key topics for Sunday.
”It won’t only be speed that makes the difference but, above all, the race strategy. I think we'll have a lot of speed, in line with the best, but we’ll see what happens."

Aleix doesn't spare a jab at Ducati.
"The best bike on the grid? Mine, since I think I have the best bike. Surely, Ducati has progressed a lot now that we’re in the middle of the season, and perhaps theirs is the most competitive. I don't understand why there’s no Ducati at the top of the World Championship."

Maverick Viñales  then took the floor. He’s 9th  in qualifying, about half a second behind Bagnaia’s Ducati.
"We’re becoming really consistent,” he commented. “We’re only missing one last step, but I’m convinced that it’ll come soon. We need to keep our nose to the grindstone, knowing that we’ll get to fight it out with the best. I could do better in qualifying today, but I suffered, so I’ll have to try to work. Unfortunately, I still lack that confidence."

Then there’s another aspect that Maverick underlined.
"I noticed that I can be fast right away, like in the FP4, but I have to try to ride more naturally. I still think too much when I'm riding the bike. I have to be more fluid, even with the new tire."

Now it’s all about Sunday.
”We could have a great race tomorrow, even if it's hard to get on the podium. But I think that we can get there, especially in the second part of the race. Every weekend gives us the awareness that we’re getting closer and closer to the best riders. It’ll be much warmer tomorrow, but the key will be managing tires and electronics. We have great motivation but, above all, the certainty that we’ll have an important GP."