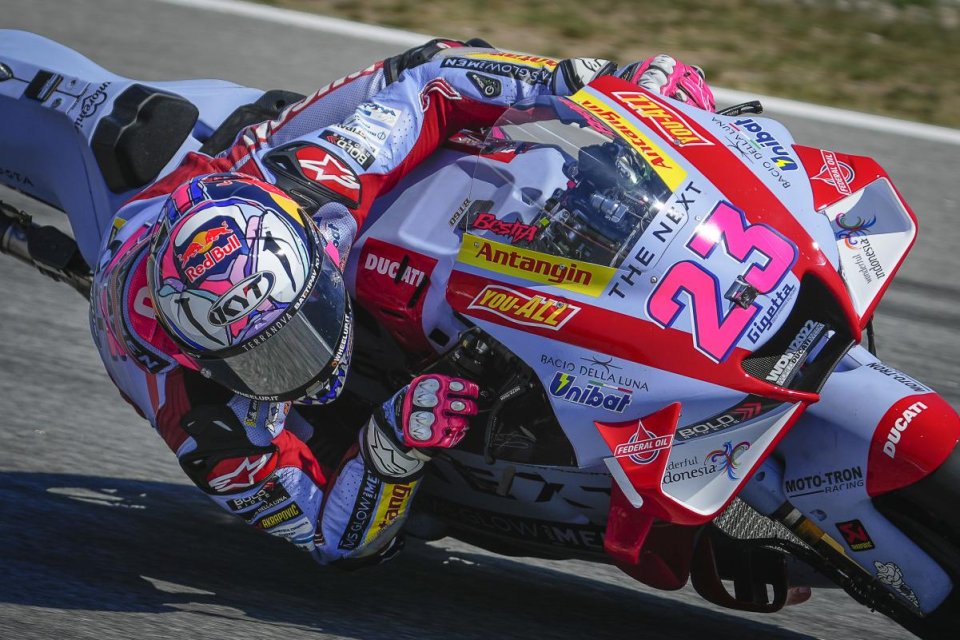 It was a Friday spent playing catch-up at the Sachsenring for Enea Bastianini. In the afternoon when the Ducatis were on top form, he had to play catch-up with the 13th time, more than seven tenths of a second from the GP22 of Bagnaia. However, the Gresini team rider is not particularly worried, as he knows where to intervene.

"It wasn’t a great day, even if in the end we managed to make a step forward - he said - for tomorrow I need to have more confidence on the front, since when it’s not there I’m struggling to be as fast and effective as I want. It probably depends on the fact that my riding style is not right at the moment ”.

A lot of work on this Friday for Enea...

“This morning I followed Pecco in the first run and he has a lot more speed than me in the fast corners, but I don't know if this depends on his bike or my style. For tomorrow I will have to be more effective, especially in braking. Usually I'm a little aggressive in my style and the track grip here is not the best compared to Barcelona ”.

A key aspect, which is complicating the plans of the Gresini rider.

“When front grip is missing, I’m struggling. This is something that penalizes you 360°, especially in the world title battle".

In all this Bastianini is dealing with the absence of his chief engineer, Alberto Giribuola, who tested positive for Covid.

“Without him something is missing, I can't deny it. Sergio Verbena, who replaces him, is doing his best, but we must remember that this is a practice day. Today I stayed idle a little longer than I should have, but I am convinced that tomorrow will be better ".

Dictating the pace is the Ducati of Bagnaia.

“It doesn't piss me off to see him up front like so many other Ducatis, on the contrary it motivates me. I am aware that my bike can be fast and now it's my turn to do something, since here Pecco, Zarco and Martin are able to make a big difference, while I have a style that is too stop and go ”.

Someone who did better than Bastianini is his teammate, Fabio Di Giannantonio, ninth quickest half a second behind Bagnaia.

“I am partly surprised and partly not by this result - commented the Italian - in the last few races we have been working well and the feelings are positive, so it’s cool. As I said, I'm not surprised, because unless there are big grip changes, the feeling remains the same from track to track ”.

For him this is the first time at Sachsenring with MotoGP.

"Here the straight is short, because as soon as you come out of the last corner and put the front tire on the ground, you already have to brake. I didn't think this was a Ducati track, instead there are many in the top positions. This means that I have to work well and in part I’m also kicking myself given the high competitive level".

The fact is that in Germany Ducati has hogged a large part of the limelight.

"We have reached a level where if you are confident you can be competitive on any track and I don't think there are any more Yamaha, Honda or Ducati tracks, given the balance and the small gaps. As for race pace, I am very happy with my pace with the hard, since in FP2 I finished with a 1m21.4s compared to the low 1m22s in the morning. We still have three to four tenths to go before we have a super pace, but we are working on it. Obviously I don't really need to get there, seeing as we are working well anyway ”.

Finally, a consideration about his teammate. "Enea has always been stronger than me since the beginning of the year and there has never been tension between us. We have an excellent relationship, so much so that yesterday we even had dinner together ".