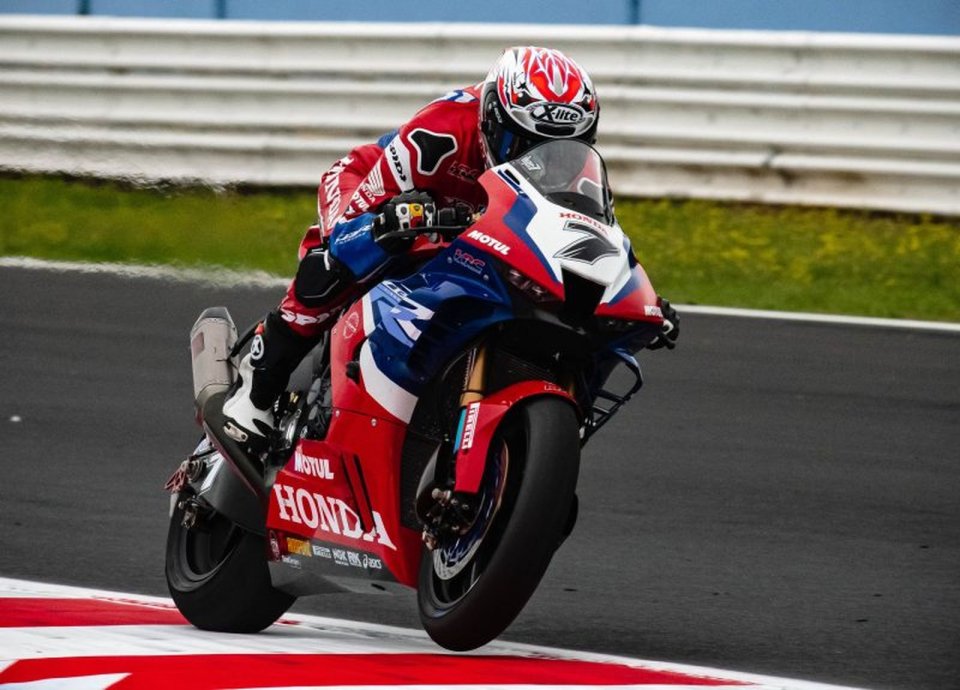 With the top twelve riders separated by just nine tenths of a second at the end of the first day of practice at the Misano World Circuit Marco Simoncelli, Iker Lecuona confirmed Team HRC's progress. Despite the variable weather conditions, cold in the morning and hot in the afternoon, the former KTM rider in MotoGP placed the first CBR 1000 RR-R in eighth place in the combined standings with a time of 1m34.793s, at the end of a Friday decidedly laborious from various points of view.

"It wasn’t such a bad day, although we expected something more after the morning session. This morning I was immediately comfortable with the bike. We still have vibration problems coming from the rear, which we are trying to solve. In the afternoon instead I started the session with a used tire and I felt quite comfortable, to the point that I was able to improve my lap time. "

The Spaniard continued his analysis, focusing in particular on the new types of SCX.

"I was very happy up to that moment, but during the second exit with one of the new rear tires introduced by Pirelli I didn't have the same sensations as before and unfortunately the times did not come. We have to work on this aspect, for tomorrow our priority goal is all about finding a compromise for the vibrations so that I can feel comfortable braking. The bike can express its potential on this track as well," he continued.

Then he talked about the differences between MotoGP and Superbike.

"From the first moment I said that, although it is not at the same level as MotoGP, the championship has at least three really strong riders and a lot of young guys like Locatelli, Rinaldi, my teammate Xavi Vierge, the level today is higher than ever. Lately more and more riders from different championships are trying their hand at Superbike and the bar will rise for obvious reasons. Some MotoGP riders are thinking of coming here, but even in this championship many of the places are closed, there are not many free places. I'm sure at least two or three riders, from MotoGP or Moto2, will come here in 2023 ".

The difference between a MotoGP and a Superbike is great and goes beyond the lap time difference. Bagnaia 1m31.065s, Rea 1m33.416s.

"At Misano with the MotoGP and Superbike different lines are used, different riding styles and also the impression you get on riding them is different. With the Superbike you are always sideways, and you play around a lot more with the bike. In MotoGP, you have to ride perfectly, honestly, I enjoy it a lot more here, even with MotoGP I was fast but I enjoy it more here. Anyway: you can't compare a GT car with an F1 and here it's the same. "

Iker Lecuona then backed up what one of the most important sponsors of MotoGP, Repsol, stated clearly recently.

"I have said it many times, there is too much electronics in MotoGP, riders in that way don't make a difference. Maybe on the same bikes, yes, but in MotoGP there is too much, it is difficult to fight, there are many systems with which to interact. Here the bike ... it's a bike, there is electronics, but it's basic. So we can fight and follow an opponent in the slipstream without being shaken around by turbulence. As for going back there, I'm young, anything can happen, why not , we'll see. For the moment the focus is here, I’m having a lot of fun and I'm fine with the team. "