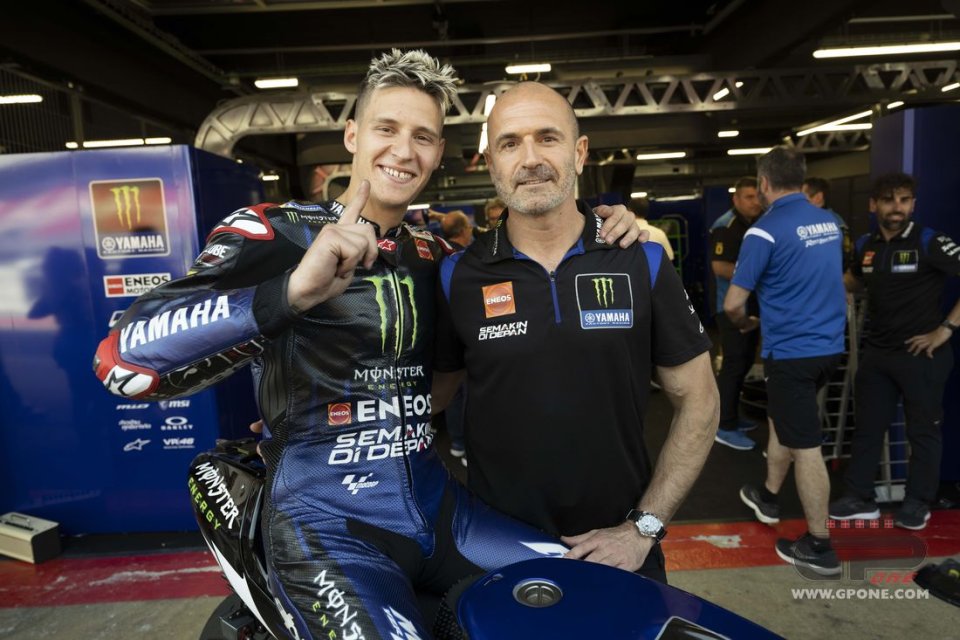 After 9 races, Yamaha leads the riders' championship with Quartararo on 147 points, is second in the constructors' championship, again with 147 points, all those of Fabio. This number perfectly explains how much a difference the Frenchman is making in this 2022 season. The reigning world champion has not been sitting on his laurels but has continued to grow and the results are there for all to see. First of all, Massimo 'Maio' Meregalli, the team manager of the official Iwata team.

"Fabio continues to improve, this year he is faster than last year but it does not surprise me because I have been working with him for a year and a half, I know him, and he is really determined - says Meregalli - The beginning of the year was complicated, we all expected more from the technical package and maybe he took a moment to digest it, then he started to go really fast. From the fifth lap of FP1 he is already at 100%, he works with the team on the details and they prepare for the race really well. On the one hand, because the bike is always the same, we have been saying it since 2011 - he laughs - it has never been distorted and he has monstrous confidence on the front, the setup changes little. "

Is that valid on all tracks?

"On Friday, in Barcelona, ​​we struggled a bit, also due to the lack of grip. We had to work a little more than usual, but from FP3 he prepared the race perfectly. Each session Fabio takes a step forward, and he does the last one on Sunday. I think no one could have imagined his pace, there was no Pecco but there was Aleix who has improved a lot. In the tests we had seen that Espargarò had more tyre drop than us, but you never know how much your rivals are pushing. Fabio, after the race, told us that despite managing the tyres he was gaining a couple of tenths per lap. Let's say he is still maturing (laughs) ".

What is his secret?

“Fabio's plus is being able to have fun and he transmits this serenity to the team. Plus, at the same time, he's really determined on the job. In the Barcelona tests he was already in the garage before 10am, we made him do some comparison tests between two swingarms, a very boring job, but he gave his best as always. This makes him make the difference, he is able to exploit the strengths of our bike to more than 100%. We went to Mugello and Barcelona thinking of limiting the damage, but he finished 2nd in Italy and won in Spain ”.

"Yamaha has changed mentality, you will see a different and faster M1"

Quartararo asks for more power and you have strengthened the squad with Luca Marmorini. Will we see a different M1 next year?

“It will definitely be faster (laughs). I am convinced of this because Takahiro Sumi has become the head of development and he has always been very open-minded. He knows which areas are going best and worst and he has the power to steer development, so I'm sure things will change. The agreement with Marmorini is part of this opening, there has never been external consultancy before. In addition, new people have also arrived in Japan”.

When will we see the prototype of the new bike?

“I think that in the Misano tests in September we will start testing the first version of the 2023 bike”.

Right now Quartararo is the only one to win on the Yamaha and comparisons are already being made with Stoner at the time of Ducati and with Marquez on the Honda. Is this really the case?

“Right now, yes, but there are reasons. Binder made a considerable leap from Moto3 to MotoGP, Miller also needed time, and in any case, he has been improving in the last few races. Dovizioso has ridden a completely different bike to ours for many years, I would have expected him to reach his level but I see him in difficulty. If the transition had been the other way around, he would certainly have adapted sooner, but on the Yamaha, you have to have a high cornering speed while he was used to braking hard, turning the bike and then opening the throttle. The M1 has to be ridden… with balls, you have to be hardcore (laughs)”.

"A complicated 2021 weighs heavily on Morbidelli's performances, but leaving Forcada has nothing to do with it" 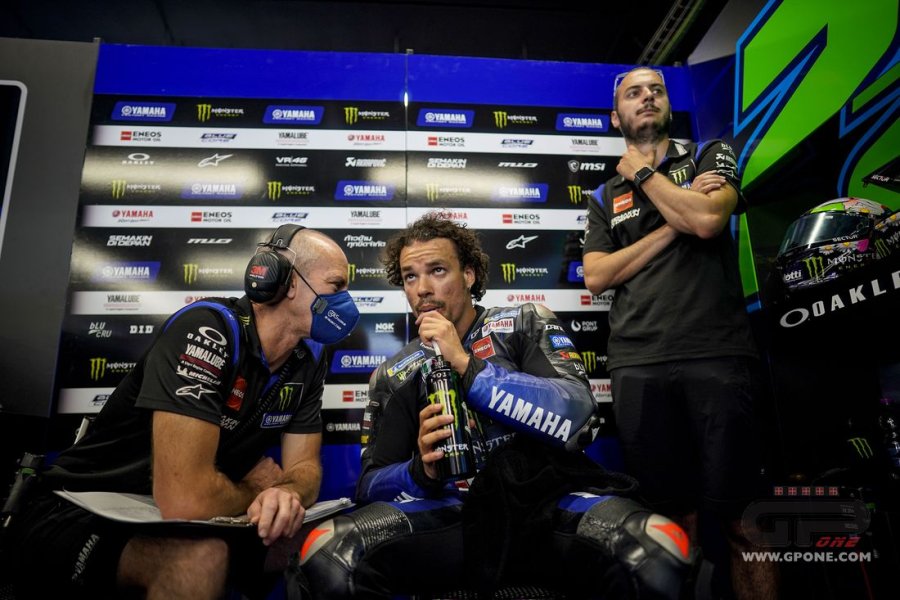 Then there is Morbidelli, his difficulties are a mystery.

“We too, including Franco, expected more, we can’t hide it. At the beginning of last year he rode a different bike from ours, then he was 4, 5 months without racing, he wanted to accelerate his return but he was never in a position to ride well, because his leg did not work as it should and he only returned to 100% of his physical condition this year. Although the results at this time may not reflect what we see from the inside, al Mugello and in Barcelona, ​​including tests, he began to find the sensations he was looking for. In the first races of the year he did a fast lap but then lost it immediately, while now he manages to have a constant pace. He is getting there, but it is a longer process than we expected ”.

How did you try to help him?

"We made a lot of changes, we tried to replicate the sensations he had on the old bike on this year's one, but the two M1s have slightly different characteristics and that's not possible. I can still say he’s on his way."

Could the fact of no longer having Ramon Forcada as crew chief have had an influence?

“No, I spoke directly with Franco and he assured me that he gets along well with the people he works with. Primmer may lack some experience as a crew chief, but he has known the M1 for many years, when I joined Yamaha, he was already there. He has always worked with Lorenzo and then with Vinales, with Covid he was stuck in Australia and his absence in Maverick’s team was felt. From a technical point of view there are no problems, Franco assured me that if there were any problems in that sense, he would be the first to tell me ".

"We want to get back to having a satellite team in the future, but now all the teams are under contract"

Let's talk now about the future: how important will it be not to have a satellite team next year?

"At the moment, unfortunately, we cannot use the data from the satellite team, because there is a big difference between them and us. However, having it is still better than not having it, in a race weekend you can still recover more information. We didn't expect it, as Jarvis said, but in 2023 we will be alone ”.

Is the goal to try to have another one as soon as possible?

“Certainly in the future, also because it was not our choice. The problem is that now all the teams have contracts to respect, so we will probably talk about it again in the second half of next year ”.