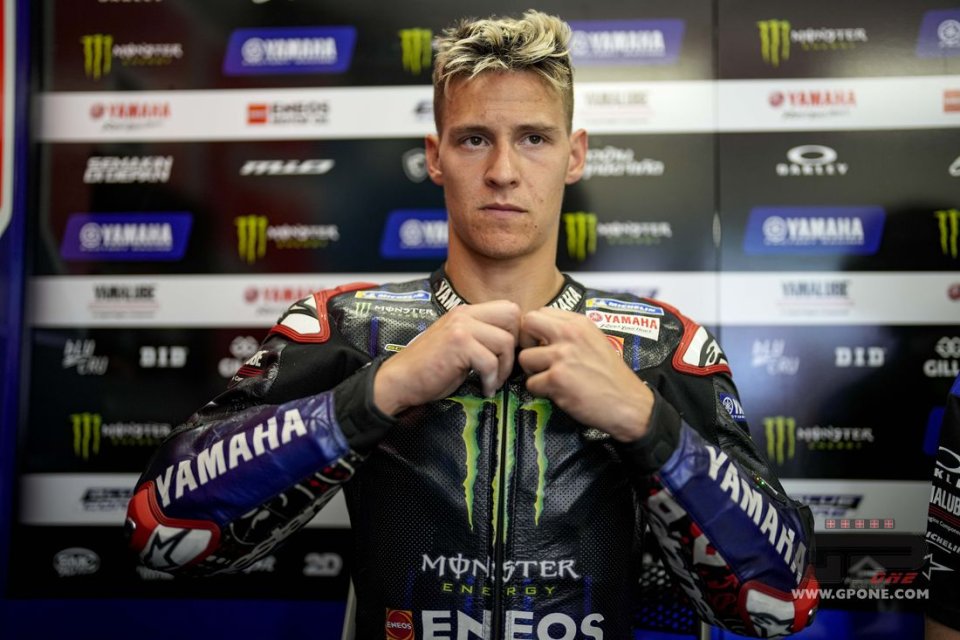 It’s mid-afternoon and Fabio Quartararo’s name is still at the top of the list for the Barcelona test times, the same position he had yesterday in the race, but there's nothing special about his M1, though (while Aprilia and Ducati are working hard on aerodynamics).

"I didn't have anything very important to test," the French rider explained. “I had the swingarm I had already used in Jerez, and I compared two sets of tires, and I had enough time to finish the job. Then I tried a new mapping to try to find a little more power, some new Michelin tires, and a set-up. I’d say that's it."

Did you try the new aerodynamics again that Yamaha had brought to Mugello?
"I won't use it anymore. I'll stick to the standard. Even if from outside it seems like a very small change,  you can really feel the difference on the bike, and it makes me feel strange. Since Mugello on Sunday, I decided to go back to the standard one. In the end, it's better. The goal of the new fairing was to improve maximum speed in straights. We gained only one kilometer per hour and lost a lot in the turns. That's why I decided to go back.”

Wasn't it a shame that it was approved and shelved just as fast?
"In 2019, 2020, and 2021, we always used the same fairing, when they could have made three evolutions. We needed to try something different, even if it worked. They made two new fairings in a year, because I asked to have a four-wing thing, and it was a great improvement."

Yamaha hired an engineer who worked in Formula 1 with Ferrari and Toyota, Marmorini. Is that what you asked?
"I've always pushed, and even harder now, for more power, and I'm sure they're working hard on the new engine for 2023. I always say the same thing, but because it’s true. If you do everything perfectly you can win, but when you’re in difficult situation, power changes your race. I remember Bagnaia in the first race in Portimao last year. He was eleventh on the grid and finished the race second. Logically, he was very fast, but when something similar happened to me in the second race, I was sixth or seventh. I couldn’t pass, even if I could have had the pace to battle it out for the win with Pecco. That's why I think power is the most important thing, and I don't think about anything else.”