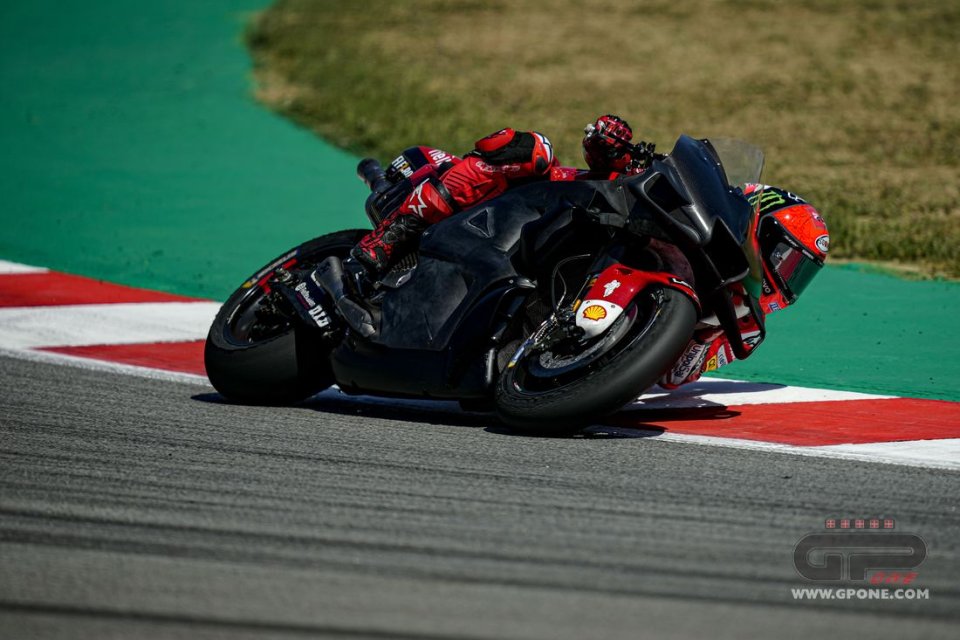 Pecco Bagnaia needed to forget what happened yesterday at the start of the Barcelona GP, and getting on a bike is perhaps the best therapy for a rider. “It was important to test today, and now I want to think about the Sachsenring. I’ve already thought enough about the accident," he sighed.

He spared no effort on the track, completing 84 laps with the second best time, behind Quartararo by only 4 thousandths of a second.

"I did a lot of laps. I had to recover from yesterday, also to be able to let off some steam. It was a positive day for that too,”  he smiled. “I'm happy because the various things we tested have all brought something good. There’s a nice overall potential. Today we definitely had an advantage thanks to the grip on the track. The asphalt was finally entirely black, and even if there was wind that was a bit annoying,  everything went smoothly."

The highlight was the new fairing.

"It allows us not to lose too much maneuverability but to recuperate some maximum speed,” Bagnaia explained. “It doesn’t work badly, but I don’t know if we’ll be seeing it on the track this year, because there’s still some work to be done, and today's version isn’t the final version. On circuits like the Red Bull Ring, it’ll help but, here in Barcelona, I preferred the standard because maneuverability is essential. It doesn’t matter if you lose some speed. In any case, I noticed a great potential."

More than not working well, the new aerodynamic package is not what Bagnaia was looking for.

"As we’ve seen, a bike that doesn’t have great maximum speed is winning, and I myself have improved with a fairing that doesn’t improve top speed but maneuverability. So I’d like to continue on this path," he said.

So to get even closer to the Yamaha strong points, you need something else?

"We need more grip at the maximum lean angle, and we’re working on this," the Ducati rider concluded.