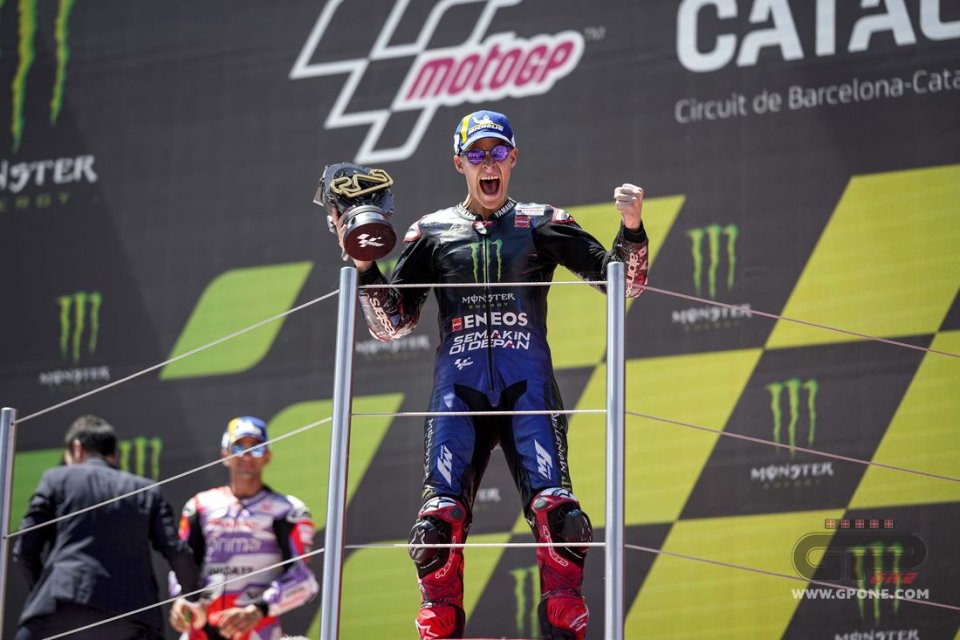 Fortune favours the brave, as they say, and often champions too. Fabio Quartararo in Barcelona was practically perfect in his conduct of the race, dominating it from the first corner to the chequered flag, but fate gave him more than a gift, indeed more than one. Bagnaia was knocked to the ground by Nakagami, Bastianini crashed, Aleix Espargarò lost the podium due to premature celebrations. So the current standings are looking his way, with a lead of 22 points over the Spaniard and more than 60 over the two Italians.

“I didn't expect to be so fast and consistent - the Frenchman admitted - I had a good pace, but not very fast, but the start was very important. My strategy was to push in the first 5 laps and when I saw that I was gaining an advantage it was fantastic ”.

You managed it perfectly.

“When you are in front, alone, the race is very long, you start thinking about very stupid things - he joked - In truth, before starting I thought there would be a fight but it was nice anyway, nobody could overtake me on the straight! It's an excellent result for the championship ”.

Quartararo is reading the season perfectly.

“The right way is to win when you feel strong and parry the blow when you are in difficulty - he explained - But always being 1st or 2nd is not easy, especially with my rivals. At Mugello I couldn't win, here in Barcelona I expected worse because of the straight, but it's downhill and the Yamaha wasn't going badly. The important thing is to be consistent, as I was last year, I feel like I am riding at my best and I have even more confidence than in 2021. Today I was able to make a difference in braking. "

Fabio also commented on the decision not to take measures after the accident caused by Nakagami.

“What can I say? - he referred to the start - First of all, decisions must be made more quickly, what happened in Moto2 is not acceptable, when they waited too long before stopping the race, with the rain and the riders on slick tyres, it’s always better to prevent certain things. Anyway, Nakagami's was not a racing accident, you can't brake so late. Pecco started 2nd and he 12th, I don't understand how he got there. On the first lap you have to be aware that we ride very heavy bikes and that the consequences can be terrible, the start is the riskiest moment”.